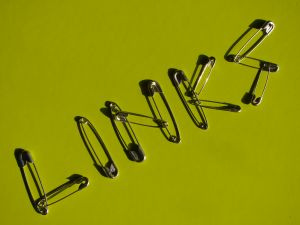 What is a blogger to do on the 7th day of her blog-a-day commitment when it’s five hours to midnight and she doesn’t feel like writing a real entry? Post some links, of course! Why create my own content when I can feature content that has already been created?

This Halloween, you can be ‘Potato Jesus’
This is the funniest, topical Halloween costume I’ve seen so far: Potato Jesus. It’s based on an incident earlier this year where a woman infamously tried to restore a fresco of Jesus, “tried” being the operative word in that sentence. The church where it happened has become a tourist attraction, so at least they’ve made some money off of the gaffe. I don’t think they’re selling costumes though.

George Takei’s Facebook page
Best known as Sulu from the original Star Trek series, George Takei also posts tons of funny and interesting stuff on his Facebook page. I always like seeing one of his posts appear in my feed. Did you know he also helped plan the Los Angeles subway? No joke.

Watch “The Guild” season 6!
I only recently started watching the web series “The Guild,” but I love it. It’s about a group of people who all play the same online game and probably would never meet under any other circumstance, yet become friends. It’s funny and sweet and you don’t have to be a gamer to like it. (I’m not.) It probably helps to be a geek though. Season 6 just started airing weekly on YouTube.

My favorite character is Clara, who is overweight, yet she doesn’t make fun of her weight, other people don’t make fun of her weight, and I can’t recall her weight ever being mentioned, which is rare for any media format. Please take note: fat does not have to be a character trait. Also, she’s a mother, but she’s not obsessed with being the perfect mother, which is refreshing. Ok, she’s downright negligent, but in a funny way!

xkcd: Click and Drag
xkcd is “a webcomic of romance, sarcasm, math, and language” that’s been around for ages. It’s reliably funny, thought-provoking, and weird. The Click and Drag comic is just plain awesome, but make sure you have some time on your hands before you visit. The comic lets you click and drag you way through a massive world. (Someone created a cheat page that shows the whole world image at once. I can send you the link if you ask for it.)