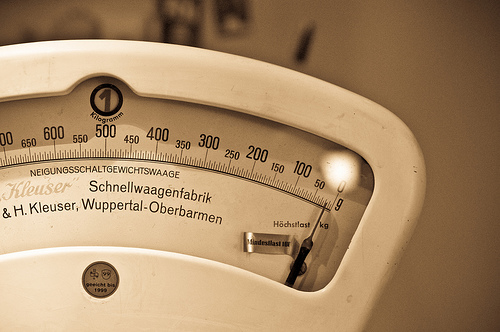 I don’t remember when I stopped weighing myself regularly, just like I don’t remember when I stopped cooking. (The recurring theme of my Reasons for Regain series might be “not paying enough attention.”) During the years that I lost weight and maintained it I weighed myself daily and tracked my progress. Originally I used the FitDay program to record my weigh-ins, but at the beginning of 2010 I switched to an Excel spreadsheet. I never installed FitDay on my new computer, so I don’t have access to that old data and thus can’t find the exact day I stopped tracking.

The Excel spreadsheet shows that I went through fits and bursts of tracking. I tracked all of January 2010, but then dropped off and didn’t weigh-in again until March. After that the next weigh-in wasn’t until August…of the next year. l’m fairly certain I must have stepped on the scale sometime in that 15-month gap, but I wasn’t writing it down, which is probably just as important as the weighing itself. If you don’t track your data it’s hard to see where you’ve been and where you’re going. Instead I was stepping on the scale, thinking, “Oh, dear Lord,” stepping off, and trying to wipe the whole thing from my memory. And it looks like I was successful at that!

In 2013 I had four bursts of weight-tracking, which is the most for any year in the spreadsheet. However each burst doesn’t seem to last more than a month. The ends of these bursts usually end with my weight ticking up several pounds, so I think I got discouraged and gave up, whereas if the weight had continued to go down I’d probably have kept tracking.

I’ve been tracking my weight every day since December 31, 2013 and I’ve been successful in losing several pounds. I plan to continue tracking for the rest of the year, even if I get bad news because ignoring a problem unfortunately does not make it go away.

Update on Reason for Regain #1: I stopped cooking
I’ve continued to cook more of my meals this year. I’ve found that: