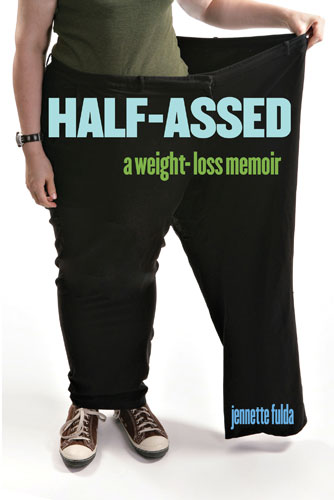 At age 24 and 372 pounds, Jennette Fulda thought maybe the best way to lose weight was to have her gallbladder removed. Then she decided to work her ass off—literally. In her journey from full-figured to half-assed, she stops only to knock her cat off the treadmill.

Follow Jennette as she loses over half her weight without losing her sense of humor in this light-hearted and inspirational tale. Sometimes the best way to lose weight is to laugh your ass off.

What People are Saying

“A wry and refreshingly level-headed account of a truly awesome endeavor.” – Wendy McClure, author of I’m Not the New Me and The Wilder Life

“Read it and be inspired!” – Jen Lancaster, author of Such a Pretty Fat

After the publication of the book, I offered some exclusive extras to people who could prove they’d purchased a copy. Enough time has passed now that I’m making them available to everyone, though I certainly wouldn’t mind if you still bought a copy of the book.

During the proofreading process, my copy editor made a list of all the special words I used that are not included in traditional dictionaries. The list mostly includes brand names and places. It’s an interesting fingerprint of my writing style, and it’s fun to read all the weird words I used in the book in a big list. Download the word list here in PDF format. (Beware! It may make you hungry.)

In 2017 it was brought to my attention that I had used the wrong pronouns when referring to a transgender friend on pages 103-104 of the print edition of Half-Assed. Short version: It was 2007 and I didn’t know any better. Long version: In the 10 years since the book was published I’ve learned a lot about transgender issues. I worked with a transgender woman for over a year. I read about the fallout from a Grantland article that mishandled how it covered a transgender woman who later committed suicide. I’ve seen news specials that follow the struggles of transgender children. Celebrities like Laverne Cox and Caitlyn Jenner have brought attention to the transgender community. I know about the existence of the GLAAD Media Reference Guide that details the accurate way to report on transgender people. I’ve learned a lot in the past decade.

I contacted my publisher to see if we could correct the pronoun usage in the Kindle edition of the book, but unfortunately the costs to do so are too prohibitive. They also can’t make any changes to the print edition until they run out of stock and need to reprint the book, which probably won’t happen in the near future.

Instead, I’m giving you permission to get out a pen and make the changes yourself if you own a print edition of Half-Assed. That’s right, you have my permission to mark up the book! The corrections use the proper gender and get rid of a bad joke that implies someone’s gender is defined by their anatomy, which is incorrect. The corrections occur on pages 103-104 at the end of the chapter titled “The Girl in the Mirror.” Here’s how the corrections should look: 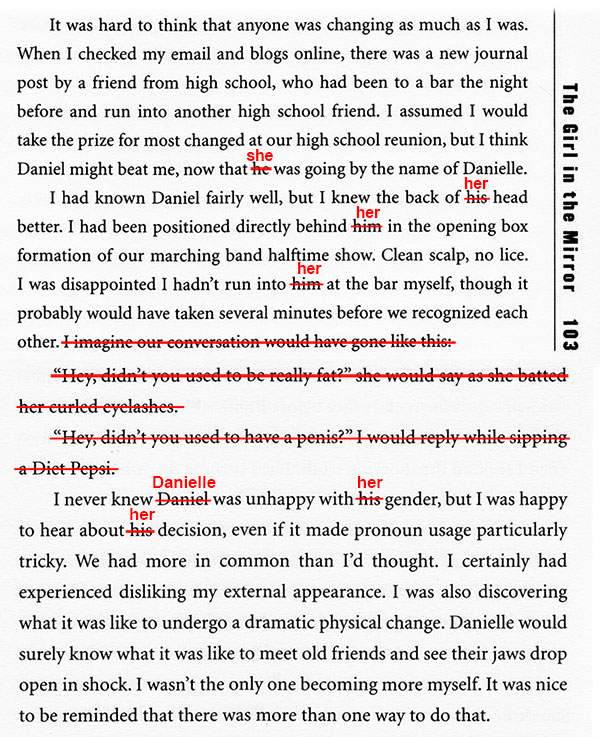