A couple weeks ago a reader of PastaQueen.com told me she’d seen my photo on the cover of the health section of The Eagle-Tribune, the paper for North Andover, Massachusetts. Correction, the Pulitzer Prize winning paper of North Anodover, Massachusetts, as is stated in their masthead – right next to my photo.

Holy crap! As if that weren’t shocking enough, I flipped to page 13 as the masthead instructed me and saw this: 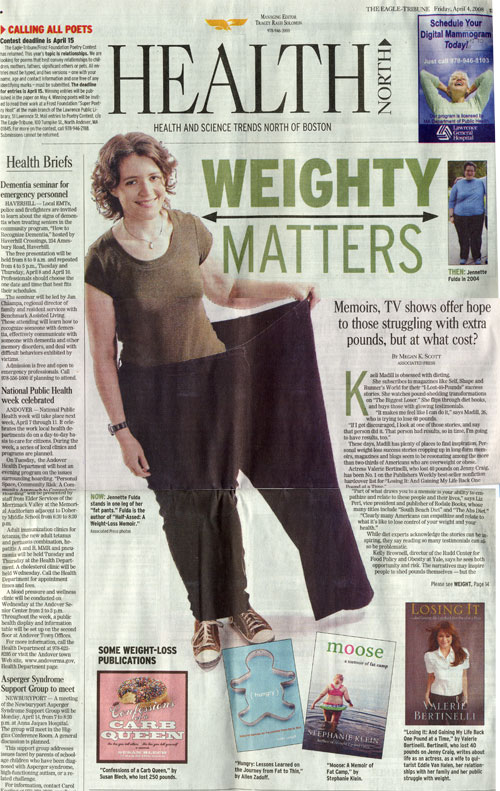 Holy truckload of crap! I’m not just on the cover of the health section, I am the health section. It took three swipes of my flatbed scanner to scan this whole image. I’m glad I don’t live in North Andover or else I’d have been embarrassed to leave the house. It’s funny, because I was interviewed for the article, but nothing I said was used. One sentence from my book was included as a quote and my book was included in a list of weight-loss memoirs and that was it. Yet they used my picture. Why? Because that photo of me standing in my fat pants is awesome. I also sent them a very hi-res image, 2912×4368 pixels and 3.4mb, so they were actually able to print it at a large size without quality degradation. Let this be a lesson to upcoming authors: pay the money and get a good studio shot of yourself. I’ve gotten a lot of attention for my book simply because that photo is very striking. It was worth every penny. Thanks again to Stephen Hobley for taking the money shot!

Thanks to Wendy for sending me the paper. You rock!

Later: Event cancellation and another review
Earlier: Blogging about goals in The Globe and Mail
Home: Main blog index