Half-Assed: A Weight-Loss Memoir has been named a Book Sense Notable Book for May 2008. Book Sense is a nationwide network of 1,200+ independent bookstores and is part of the American Booksellers Association. This recognition means a lot to me because all their notable titles come from nominations by independent booksellers. That means there is a bookseller at an independent shop somewhere in this country who liked my book enough to go to the trouble of nominating it. Thank you! I truly appreciate it.

I’ve also gotten several comments on my other blog, PastaQueen.com, from readers who have been surprised to open their newspapers and see my face smiling back at them. My image is haunting lifestyle sections across America! The AP article that mentions my book has been picked up by various papers across the country, and some of them have chosen to run the picture of me standing in one leg of my fat pants. It’s bizarre to think that my image has run through printing presses everywhere from San Diego, California to Lawrence, Massachusetts. The real thanks goes to Stephen Hobley, the photographer who took the fantastic photo, and to Lane Bryant for making pants that big in the first place. 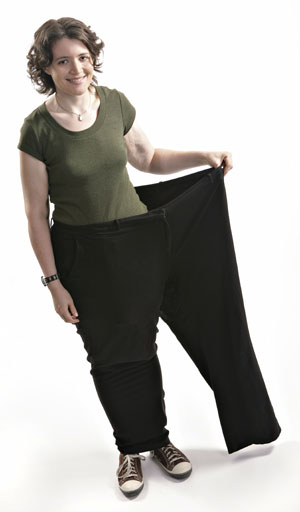