I was excited to go to the Bluegrass Festival of Books because I’d get to see the castle. 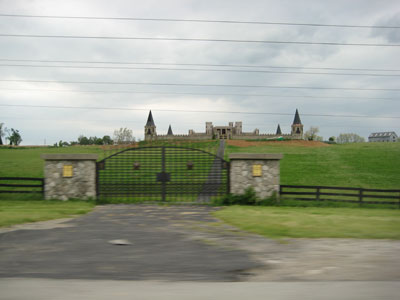 Yes, that’s a castle, in Kentucky. Readers in Europe are probably unimpressed, but here in America the natives were building teepees, not castles, so seeing turrets in a field is unusual. Seeing them nestled between horse farms is downright bizarre. Local legend has it that a man built the castle for his wife, they got divorced, and now no one wants to buy it. Of course, I just did some googling and ruined the beautiful aura of mystery around the establishment to discover that the castle will be open to select events in the fall of 2008. Anybody have an extra $25,000?

I was also excited to attend this book festival because I lived in Lexington for two years when I was at the University of Kentucky. I spent most of this time confused about my direction in life and eating too many candy bars. When I wasn’t hiding Ho-Hos under my bed, I sometimes went to Joseph-Beth Booksellers where the fair was held. Here are my impressions and tips from my first book fair experience

Get your sales pitch down
I got a nice table next to the escalator where I set up my book sign and splayed postcards next to my big stack of books, which helped draw people to my table. The author sitting next to me also had bumper stickers and patches, which got attention because people always want free swag. As potential customers walked by, I tried to make eye contact and appear inviting without being so aggressive that I scared them off. I also discovered I needed to develop a one or two sentence pitch that succinctly summarized what my book was about and why anyone would want to buy it. Most of these people had never heard of my blog or my book before, so they were starting from a blank slate. I needed to make an impression fast. 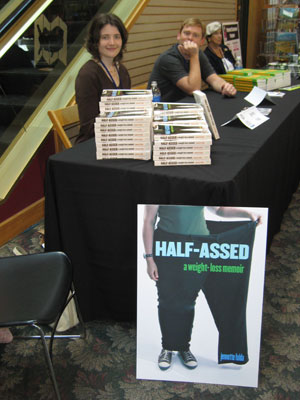 Make friends
I sold about 10-12 books at the fair, which was a good number, but the most rewarding aspect of the experience was meeting other authors. I had a good time chatting with my table-mate, Scott Francis, who wrote Monster Spotter’s Guide to North America

which he described as a birdwatcher’s guide for monsters. (See? A simple, catchy sales pitch!) It’s a funny book, complete with illustrations, and I picked up a copy for myself. Scott also writes a blog about book marketing called, Living with the M-Word. I also learned that Scott does tae kwon do and his father was a Christmas tree farmer. When Scott left his table to go to lunch, I helped pitch his book to people passing by and when I left to eat he did the same. Teamwork!

There wasn’t a meet-up for authors, so I really only met a couple other writers at lunch. I felt rather chained to my table too, afraid that if I left for 5 minutes someone would come by wanting to buy a dozen copies. If I were to do it again, I’d just get up and go talk to everyone and screw the book sales. Meeting new people was far more rewarding than selling a dozen books.

Meeting your audience
I noticed that most of the people who slowed down by my table were women. Scott’s monster book attracted more men and little kids. I nearly went “Awwww” when Scott signed his book for a little boy who was clearly excited to get his hands on a copy. I really doubt any little boys have been excited to get their hands on my book.

However, it was very rewarding to meet people who were buying my book because they had family members suffering from medical problems due to morbid obesity. I still haven’t quite wrapped my head around the fact that my book might be helping other people, but if it does, that’s awesome. I also got to meet two blog readers, which is always great!

I also gave a small talk at 2:00pm…which almost no one came too…and the janitor started vacuuming during the end. Aaah, character-building experiences! I was a little bit glad the talk wasn’t packed because public speaking is scary. The small crowd was partly due to the fact that it was held at an adjoining hotel that people had to go out of their way to attend. If I’d been in the bookstore, I think I would have been able to grab people in. 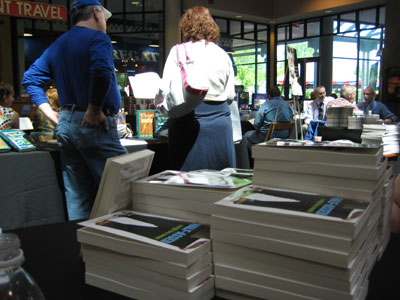 Noticing buying habits
Some people would walk by my table, pick up the book, read the back, and then decide to buy it right there. I was shocked that I didn’t have to do a little dance or wave my fat pants to get them to buy a copy. Some people would pick up the book, ask me a few questions, and then buy it. Then, there was one guy who chatted with me for 5 minutes, asking me every single weight-loss question I’ve been asked a million times in the last month – and he didn’t buy a book. Bastard! He could have at least grabbed a copy, had me sign it, and then ditched it in the kiddie lit section around the corner. If you’re going to suck up my time like that, at least pretend to buy my book, jerk. (I know this makes me sound ungrateful, but I gave up my weekend for this and I truly believe my time is worth a little money.)

A blogger among authors
At the fair I felt like a blogger amongst a sea of authors. I mean this in a positive, non-judgmental way. I like books, but I am an Internet geek at heart and I read more blogs than books. At the festival though, I was surrounded by a lot of book people, some of whom didn’t even really understand what a blog was. I felt a bit out of place, as though I’d wondered into a neighboring tribe similar to my own, but not quite my home. When one person at lunch asked me if I had another book planned, I said I didn’t really know, at which a couple people joked (in a non-shitty way though it sounds sort of shitty recounting it) that I wasn’t a real book author because they always have another book working to get out.

But, I have to agree. I really enjoyed writing a book and I’m grateful and honored that I got to go through the experience. But I like blogging more. I like the interaction, the community, the support, the immediacy. I love being a blogger. I think blogging is a completely legitimate form of writing that can be just as moving and important as any book. Many bloggers make more money off of their blogs than most authors will ever make off of their books. I know I’ve made more money off of my blog so far than I have off of my book, and I honestly doubt the book will ever catch up. I love the book, but I love the blog too, and I see blogging to be a stronger presence in my future than book writing.

Was it worth it?
I definitely enjoyed the experience of the book festival. It was great coming back to Lexington and seeing some old friends. The hosts at Joseph-Beth were superb and I’d like to thank Rachael R. for making my day go by very easily. However, I can’t say that this was a cost-effective way to sell books. All the money I spent on gas going to and from the festival and on food surely exceeded any royalties I made off of the copies sold. I think targeting my audience directly via my blog or outlets specifically focused on weight loss is more effective. Still, it was a lot of fun and I’m glad to have had the experience.

And hey, the Berenstain Bears were there! And the Cat and the Hat too! 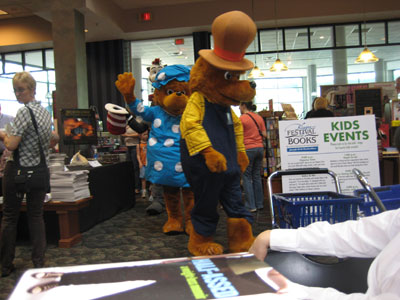 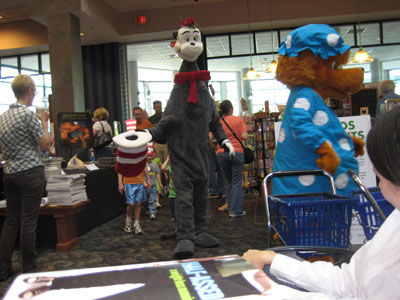