I’ve started doing Pilates again and it’s made me realize Ana Caban is immortal on DVD. The instructor who taught me all about my core and making little circles with my heels is forever thirty-six years old in the beginner’s workout video I pulled out last week. (That’s assuming, I’ve done the math correctly based on the 2006 copyright and this Facebook post about her 50th birthday two years ago.) She was about ten years older than me when I first starting doing this workout, but now my TV-sized instructor is five years younger than me, and it’s giving me an existential crisis.

As I was engaging my core and anchoring my shoulders to the mat, I found myself wondering what Ana Caban looks like today, and felt guilty that I was wondering at all. This woman made me feel strong in my body for the first time and helped me live a healthier life when I needed it the most. What does it matter what she looks like? If anything, I hope that in a couple more decades she makes a Pilates video for older people and I can follow along as my knees crackle and pop in accompaniment to the generic background music.

Really, it’s not about Ana at all. I’m just jealous that this little version of her will be forever young, because it has become increasingly clear that I will not. I can visit Ana and her assistant Tara whenever I want, an unannounced visitor popping into their studio, and they’re still striking impressive poses that are going to take me at least 30 more sessions to hit. Yet, out here in the three-dimensional world, my skin is not quite as luminescent as is once was and at least one fourth of the hairs on my head are white, with a kinkier, dryer texture that no one warned me about. I can feel my beauty fading and it makes me wish I’d appreciated it more when I had it.

I’ve never cared much about my looks outside of not wanting to be obese, so it’s odd that I’ve become so focused on the parts of my appearance unrelated to my size over the past few years. It’s undeniable that I’m a shapeshifter, and sometimes my body shifts in ways I do not want it to. What worries me is that the older a woman gets, the more she is ignored, just like how the fatter you get, the less you are seen. It won’t be long before the world starts to discard me; my older female friends have issued reports from the frontlines confirming this. So, now I’m looking for ways to delay that process that don’t require high levels of commitment. Pilates a few times a week: doable. Dying my roots every four to six weeks for eternity: I don’t think so.

I’m not actually old yet, so I still have so many possible roads ahead of me, but it’s not as many as I used to. Some roads have been traveled and are now closed. Some opportunities are gone. I still have a lot of life ahead of me, but not my whole life ahead of me. If I start feeling depressed about it, I remind myself I’m lucky for every day I get. Three kids from my high school died senior year; one got shot at a bus stop over a pair of shoes and the other two were killed in car accidents. It rattled me back then to know we were old enough to die. (School shootings weren’t really a thing yet, so I was more naïve about my mortality than today’s teens are.) I’m sure my three classmates would all be glad to have white hair right now.

It never stops either. I recently learned that a girl I went to high school with died of cancer last autumn, one day before her forty-first birthday. It particularly shook me because Michelle G. used to sit right in front of me in Mrs. H’s English class, sixth period, senior year. Someone even took a photo of us sitting there, which I discovered on the digital CD-ROM scrapbook: 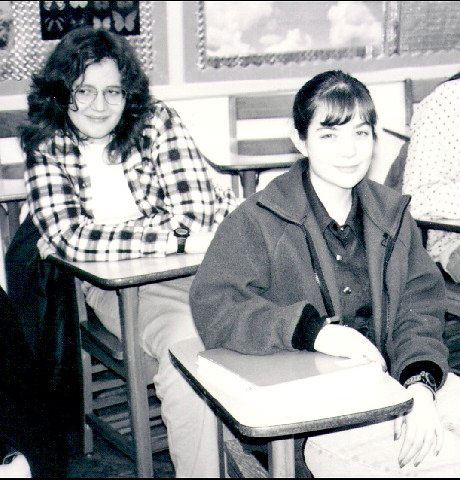 We weren’t close friends, but she was a really kind-hearted person. It’s sad to think she used to sit three feet in front of me and now she’ll always be behind me.

Not pictured are Courtney B. and Adam K., who sat to our left, got married after college, had two kids together, then some shit happened, so they got divorced. According to photos on Courtney’s Facebook, the oldest kid is in middle school now, which makes me realize—oh, yeah—we have done quite a bit of living since then, haven’t we? And actually, isn’t that point? Yes, Ana Caban never gets older on my DVD, but she’s locked inside that studio forever, doing the same thing over and over again, while I get to explore the world and try new things that will undoubtedly change me. If you stay young forever, people freeze you that way, which seems like an awful fate. It sounds like the curse a witch would put on you after you eat her gingerbread house. “Everyone will change, but not you!” That was one of the worse things about the pandemic; everything got put on hold. We were all frozen in a DVD for awhile.

But it has made me wonder, is that how people view me through my books and my blog? Am I twenty-something forever in print? Sure, I took down the weight-loss blog last year, but you can still read it on archive.org, which is fine, as long as you’re aware that it’s not a reflection of my current self. I like that my books are still out there meeting new people, but it’s more and more like they’re meeting people who are light years away who are just now seeing an image of me that was sent into space more than a decade ago. There’s not really anything to be done about this, I guess. As long as people understand that my older work is now a time capsule, I’m ok with it. It’s good to remember where you came from so you can realize how different you’ve become.

I like who I am as a person now today more than I ever did, so I’m grateful for the living I’ve done, if not the aging. I just wish my body would age at a slower rate, like a redwood tree that gets to grow for centuries, because I’d like to keep growing that long too. But for humanity to progress, I acknowledge that people do need to cycle out of the population eventually, because although we may change, we don’t always change enough.

I wish that getting older wasn’t going to make me invisible, but I always felt the most seen in my writing, and I still have a laptop and a wifi connection, so as long as my nine other fingers’ joints don’t occasionally lock up like my left thumb does, I can live on in 26 letters shuffled around. I will also keep playing on repeat this MUNA song, “Kind of Girl,” because it reminds me I still have plenty of time to write new endings. See, I just wrote a new one there.