I’m turning 40 at the end of October, but it’s the date one week after that I’m really dreading. Here’s how it’s marked on my calendar: 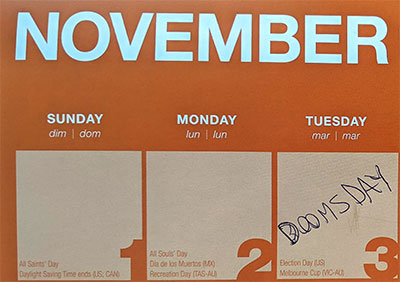 Yes, Election Day is coming, and I don’t know what comes after that.

I’ve read speculation. A Washington Post article titled “What’s the worst that could happen?” lays out many horrible possibilities.

With the exception of the “big Biden win” scenario, each of our exercises reached the brink of catastrophe, with massive disinformation campaigns, violence in the streets and a constitutional impasse.

A war game designer wrote an article at Medium detailing four different ways a civil war could play out in the modern day. Best case, some right-wing militias and radicalized police forces rise up, but Biden has the military on his side, so they’re put down easily. The worst case scenario is basically the Rwandan genocide.

I feel like I’m flipping through a Choose Your Own Adventure book, desperately searching for the path to the good ending but only finding the ones where people get shot in the streets. There are so many ways this election could go wrong that it’s hard to predict exactly which way it will go wrong. For instance, just after I started writing this entry at the end of September, Trump got diagnosed with COVID-19, which opened up a whole slew of new ways for things to go horribly wrong!

What happens when a significant percentage of a country thinks an election was illegitimate? If Trump loses, he’s laid the groundwork so his core believers will think the other side cheated; Biden is so far ahead in the polls that his followers will see a Trump win as election fraud too. Everyone is angry and fed-up because of the pandemic and record unemployment and ongoing racial injustice. The US is ready to pop.

I was hoping I was being paranoid about all this, but then a plot to kidnap the governor of Michigan and start a civil war was stopped by the FBI in early October. It’s not paranoia if people really are plotting to overthrow the government. I fear someone’s going to get killed soon. I’m not sure who or when, but it feels like it’s coming and the election might set it off.

I don’t know what happens after November 3, 2020, but I’m curious what people are doing to prepare for the unknowable void ahead of us. Here are the things that I’ve considered or am already doing: 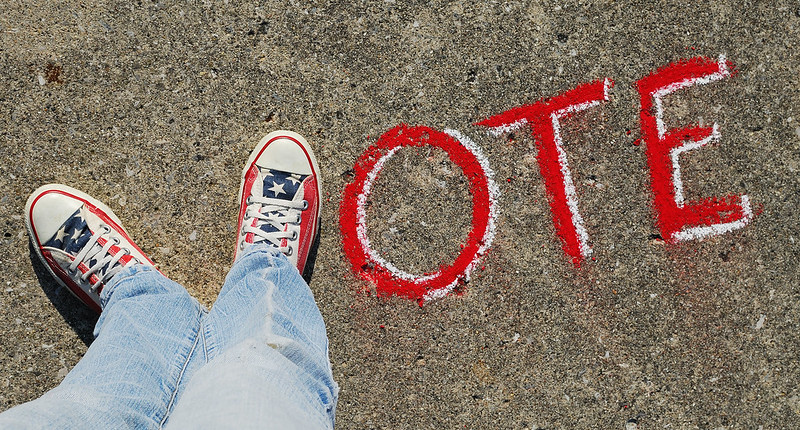 Obviously, you should vote. I mailed my absentee ballot at the end of September. I even drove to the post office to mail it, so it would be more likely to get where it’s supposed to go. I checked my ballot status at IndianaVoters.in.gov which confirmed it was received on October 1. However, if Indiana thinks my signature doesn’t match what I scrawled with an electronic pen at the BMV four years ago, they can throw out my ballot, so I don’t know if it will get counted.

If I lived in a swing state, I would have risked early voting to better ensure my vote counted, but Indiana is a solid red state and neither of our Senators are up for reelection, so I have little control over the fate of our country. The most important thing I’m voting for is governor, and I don’t he’ll be tipping the apocalypse one way or the other.

Settling in for a long fight

I don’t expect the election to be called on election night. I am old enough to remember Bush vs. Gore, and that will look like a game of pat-a-cake compared to what’s coming. My best fantasy scenario is that Biden wins Texas on election night and a Trump loss is undeniable no matter how many law suits are filed. My best realistic scenario is that Biden is declared the definitive winner within 7-10 days (after the mail-in ballots get counted) and violence is kept to a minimum. Worst case…the nation descends into chaos amidst a pandemic, economic collapse, and undecided presidency. Which is why some people are…

Between the protests and the pandemic, background checks for guns set a record high. Two of my mother’s friends have bought guns this year, which they kept in their handbags when they visited on the other side of the screened-in porch. Watch out for grannies packing heat, y’all!

Personally, I have no desire to own a gun, and even if I did, I would want to be properly trained to use one, otherwise I’m 99% certain I would end up shooting myself by accident. I also think that if more people own guns, more people are going to get shot, particularly when everyone is running around scared of everything. So, no guns for me.

Stocking up on supplies

I won’t need ammo, but I will probably stock up on canned foods and dry goods in the middle of October. There’s still a pandemic happening and there should be a surge of cases in the fall, so the less I have to go out the better, whether I’m avoiding a killer virus or a mad militia. I live in a diverse neighborhood, so it’s not unthinkable that someone might commit a hate crime around here, or burn down my apartment when they set fire to someone else’s unit. Thankfully, my 90-day supply of prescriptions just got renewed, so I’m good on those for the rest of the year. I renewed my cat’s insulin prescription a bit early than usual too, just to be safe.

When Trump go elected, I made a list of things I needed to do to survive his term and one of them was to get in shape. Past Jennette really knew what she was talking about, but Present Jennette didn’t get the message until COVID hit, at which point I took up healthy living like it was my new religion. It’s a lot harder to binge eat when you’re afraid of the grocery store! I know everyone else has gained weight this year, but I’ve lost fifty pounds and I’ve tripled the amount of distance I can walk. I’m a much stronger competitor for American Apocalypse Warrior now!

Going on a news diet

Over the past few years, I’ve been dialing back my news consumption, forcing myself to only check the news once or twice a day. I no longer read social media feeds, except for checking in on a few friends and family on Facebook.

After Ruth Bader Ginsburg died, I didn’t read any news for a week. None. I just couldn’t handle the anxiety it would induce.

I eventually got tempted back to read the story about Trump’s taxes on the New York Times, and to check on the Breonna Taylor verdict since I grew up in Louisville. Then I went on another blackout after Trump got sick and started acting even crazier than normal, possibly because of the steroids he’s on.

The amount of news I consume waxes and wanes depending how awful things get. I figure if anything earth-shattering happens, someone will text me. Like Buffy said:

Fuel up the car

I haven’t done this yet, but I think it would be best if we all have full gas tanks at the beginning of November.

Mentally prepare for the existential death of my country

Even though the odds are in Biden’s favor, Trump could still win (by cheating). And if he does, America is over. It will never be the country it was. The courts will become so slanted and districts so gerrymandered that we will never be able to come back. Corporations will run rampant over our lives. Climate change will accelerate. Our rights will be taken away. Minority rule will be law. I have prepared for this possibility mentally. It would be devastating, but it wouldn’t blindside me like I did four years ago. And if it does happen, that’s when we start…

Sometimes people joke that they’ll leave the country if someone wins an election, but this time I don’t think it’s a joke. If Trump wins, it might be time to get the hell out of here while we still can. I don’t know how to get citizenship in another country, but I would start researching it if Biden doesn’t win. I’ve also made a mental list of people I know in other countries who might let me seek refuge in their garages or she-sheds.

My passport expires at the beginning of April, and it makes me nervous to send it in and wait three months for the new one because of the pandemic backlog. (The only thing making me more nervous is figuring out how to get a standards compliant, properly sized, maskless photo, without risking my life.) There’s something unsettling about knowing I won’t be able to leave the country, even if it’s just for a few months. The only thing that comforts me is knowing the Canadian and Mexican borders are closed anyway, most of Europe isn’t accepting anyone from my diseased country, and until there’s a vaccine I don’t intend to fly anywhere unless it’s an emergency.

Do I need to do this? I’m not sure. I’ve paid with cash exactly once since the pandemic began, and the downturn in cash transactions has caused a coin shortage, so is paper money still relevant in 2020? Even if chaos breaks out, I don’t think the banking system is going to collapse. I suppose there could be cyberattacks that lock me out of my accounts though. I’m not going to convert my money into gold bars just yet, but maybe I should withdraw a few hundred bucks for safety’s sake?

Those are the things I’ve been planning or contemplating. What about you guys? How are you preparing for the election i.e. the disastrous end to a disastrous year?

Later: It’s the 19th anniversary of my 21st birthday!
Earlier: What my doctor’s visit was like during the COVID-19 pandemic
Home: Main blog index