If anyone had asked me why I rescheduled my January physical for March (which they didn’t), I was going to say it was because of icy road conditions, but really I wanted time to lose weight. My doctor has always tackled the topic of my weight compassionately and non-judgmentally, but I prefer congratulations to gentle scolding, so it didn’t seem like a big deal to delay the appointment a few months.

Then the apocalypse happened.

So, I rescheduled the appointment again, picking a random date in the future, having no idea what that future would look like or if I’d even have a future since there was a deadly virus on the loose after all. When the week before July 6 came, I checked the Indiana COVID-19 infection rate chart and saw we were on a downward slope. I also suspected we’d be on an upward slope soon enough and that autumn was going to be absolutely brutal, so if I were going to go to the doctor this year, July 6 was a pretty good day to do it. 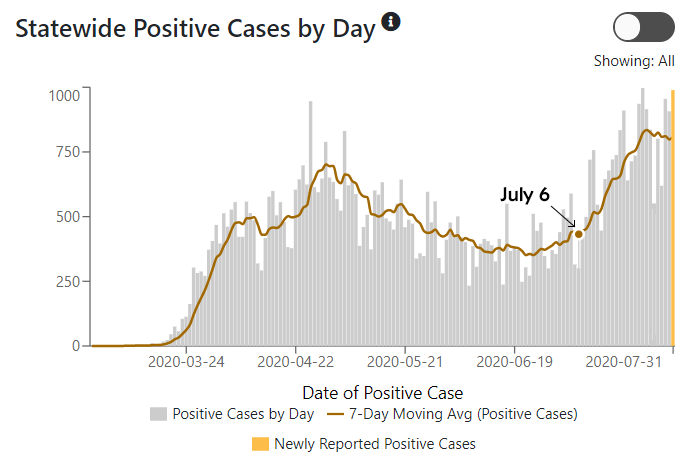 I considered not going to the doctor, but my risk management assessment concluded that the risk of not going was higher than the risk of going. I mean, a tele-appointment would have been great, but I don’t think they’ve invented a way to do a pap smear over Zoom yet, so I had to go into the office. I also figured that if I didn’t go, this would be the one year I actually got cervical cancer. My headache meds needed to be renewed too, and it had been more than a year since the doctor had seen me, so she wasn’t going to keep renewing them indefinitely. I was also a bit spooked by the fact that 5,000 more people than normal died of non-COVID causes in New York recently because they’d avoided getting care during a pandemic. So, off to the doctor I went!

Usually, I get to the doctor’s office early because I’m compulsively punctual, but that’s a bad strategy in the era of COVID. Instead, I got to the parking lot early and sat in my car for seven minutes. I’d already completed the online check-in the night before, which took care of most of the paperwork. The doctor’s office required all visitors to wear masks, but I scored extra bonus points by wearing two masks. This visit was riskiest thing I’d voluntarily done since the beginning of the pandemic, so I was willing to cling to anything that made me feel safer, even just two extra strips of cotton.

The waiting room was—well, it was weird. There were seven chairs lining the wall of the lobby spaced six feet apart. The door to the hall was propped open, either to help airflow or remove the need for anyone to touch it. Masking tape blocked off the area in front of the check-in window. There had always been a sliding plexiglass window, but this time they only opened it a crack when they handed me forms to sign. This made me feel better when someone sneezed two minutes later. I was careful to take a pen from the “New” jar and then return it to the “Used” jar when I was done.

There was only one other person in the waiting room, and he got called back right away, which left the whole space to myself until I got called back. A masked nurse led me to an examination room and mentioned this was only their second week back, so they were still adjusting to the new routine. As we chatted, I let her know I’d been very careful to wear a mask whenever I went out. That’s when she dropped two ominous words: I haven’t.

That’s right, y’all. My nurse had been running around town without a mask on for the past few months. This is one of the top five things I never want to hear from a nurse, right up there with, “I forgot to wash my hands” or “I think that was the wrong hole.” She justified this by saying she’d been a nurse for a long time and had gotten sick before, so I guess she didn’t take this new disease that seriously, nor did she seem to care that she could have been infecting other people. I’ve seen videos of ER nurses crying as they beg people to wear masks after describing the horrors of the COVID ward, so this carefree attitude blindsided me. It felt like I’d just met a woman who was against suffrage. When I’d mentally reviewed all the potential risks before coming to this appointment, I hadn’t anticipated “lackadaisical nurse” as one of them.

We both froze when she said the number. A feeling of dread filled the room, like I’d run over her dog right in front of her and neither of us could believe I’d been so reckless. I told the nurse my temperature that morning had been 98.6 both times I took it and I definitely would not have come in if I’d had a fever, so she got a tongue thermometer which gave a reading of 99.1. Still, in that long moment between temperature readings, I got a taste of the horror people must feel when they find out they’ve unknowingly infected people, even though I hadn’t infected anyone. I also thought it showed how sloppy they’d been not to take my temperature in the lobby. Someone who really did have a fever shouldn’t have been allowed to get that far into the office.

After that, my pulse and blood pressure were high—big surprise! Then the doctor came in and the only time I had to take off my mask was when she looked down my throat quickly. When I did, she said she didn’t always recognize people with their masks on, particularly people like me who only come in once a year, which I thought was funny. She kept her mask on at all times, and she apologized that she couldn’t give me a pillow during the pap smear because pillows are hard to disinfect.

After that was all done, I had to sit and wait five minutes for the nurse to bring the end-of-visit report, which gave me plenty of time to wonder who had been in this room during the last few hours and if any aerosolized particles from their respiratory tract were still lingering in the air. If I had to do it over again, I would have tried to get the first appointment of the day so there would have been less for my imagination to work with.

When the nurse came back, she stood in the doorway and—can you guess?—she PULLED DOWN HER MASK. Yes! The reckless nurse who’d been running around town without a mask then pulled down the one she was wearing. To be fair, I think she did this because the mask made her glasses fog up and she had to read something off the report to me. That said, she was only four feet away, so the fifteen seconds she spent talking directly at me were probably the riskiest part of the whole visit.

I then fled to my car and spritzed hand sanitizer all over my fingers twice before driving home.

I barely ate anything for the rest of the day because I was so anxious about my temperature, which according to Google is probably why my temperature was a bit high: anxiety. Stress increases your metabolism, which makes your body hotter. I’d been anxious the night before the appointment and all through the day of the appointment itself, so my body had plenty of time to heat up before that imprudent nurse stuck a thermometer in my ear. I also have problems with earwax buildup which Google says can cause inaccurate readings in those devices.

I spent the next few days concerned I might have gotten infected. Thankfully, I never showed any symptoms, so I seem to be fine. Really, the only two people who got close enough to infect me were the doctor and the nurse, and they both wore masks most of the time. And the fact that everyone was wearing masks in the building hopefully cut down on the amount of aerosolized particles in the air.

If you’re thinking about going to the doctor during this pandemic, I’d recommend you ask a lot of questions before your appointment, like:

Also, be prepared for something you don’t expect, like nurses who don’t like masks. I’m thankful I got this appointment out of the way and don’t have to worry about renewing my meds for another year. By then, I hope a visit to the doctor won’t be a fever-inducing brew of anxiety anymore.

Later: How are you preparing for Election Day/Week/Month/Endless Nightmare?
Earlier: Figuring out risk management in a COVID-19 world
Home: Main blog index