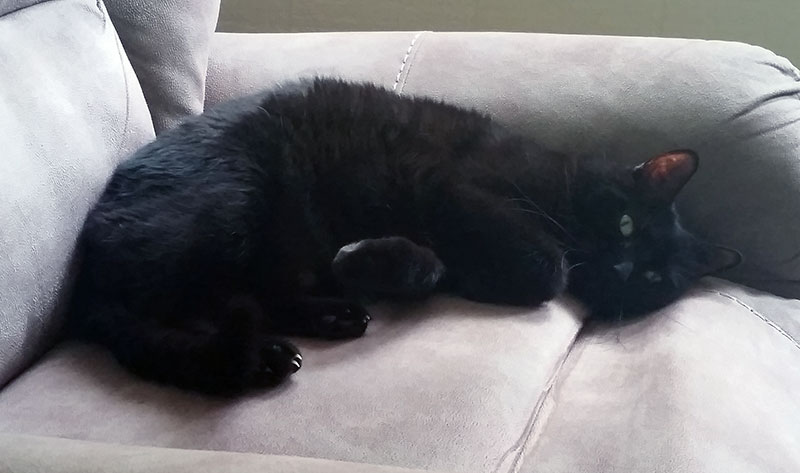 Of the two of us, I didn’t think my cat would become diabetic first.

Several of my aunts have type II diabetes, as did my grandmother, so that’s always been lurking as something that might be on the horizon of the hellscape that is my medical history. At Java Bean’s annual checkup two weeks ago, I mentioned that he’d been drinking more water than usual. I had prepared myself for kidney disease, which is what my old cat Officer Krupke died of. When the vet called the next day with the bloodwork results, I was not expecting him to say, “Java Bean might be diabetic.”

There are not enough question marks or exclamation points in the world to properly describe my surprise. It was “What?!?!?!?!?” times infinity ∞.

Thus, I have been running around for two weeks completing diabetes-related tasks, of which there are many. My first challenge was to get a urine sample so they could confirm the diagnosis. This is accomplished by putting non-absorbent litter in an empty litter pan and waiting for your cat to go during the vet’s office hours. (Fresh pee only!) I was able to transfer the urine to the sample container using one of the sterile plastic syringes I had leftover from an intravenous headache treatment eleven years ago. I love it when my previous health problems pay it forward. The last time that happened was when I used a syringe in my book trailer, which surprisingly no one commented on. Does everyone have hypodermic needles lying around their house?

The vet didn’t give me much non-absorbent litter for the task, so I ordered this Home Wellness Test for Cats from Amazon which included two pounds of litter. It came in exactly 24 hours with my Prime account, which was really impressive, but also made me feel sad for the Amazon automaton sprinting around the warehouse to package it and the Flex driver who delivered it without getting reimbursed for gas or car maintenance.

Anyway, the home test revealed there was sugar in his urine, which the vet confirmed several days later. Congratulations, Jennette, you love a furry little creature that requires insulin shots twice a day!

The test revealed he had a urinary tract infection too. And at the original visit I learned he has wax plugs in his ears and possibly a heart problem too. He’s had perfect health for 11 years and then everything broke at once like a truck rolling over 100,000 miles on the odometer.

Java Bean had been on a dry food diet, but I’ve switched him to canned food which has less carbohydrates. That also made it easier to mash his antibiotic pill into his food twice a day for a week. I had to buy a pill crusher, which I did at 10pm when I needed it because Grumpy Cat died of complications from a UTI. No messing around with that one!

I’ve also been running around getting prescription cat food specifically for diabetic cats and getting prescriptions for insulin and syringes at Kroger. I had to wrangle Java Bean into the carrier again and listen to his sad, crying-child moans so the vet could show me how to administer the insulin injections. But at least the pharmaceutical companies haven’t taken advantage of their customers’ life and death situations to jack up insulin prices over the last few years—oh, wait. Yes, they have.

Thankfully, my vet pointed me to a coupon that brings the price of Lantus, the insulin that’s best for cats, down to $99 a vial instead of the list price of $360. We’re still figuring out dosage, so I don’t know how long the vial will last, but it’ll probably be somewhere between 1-2 months. Right now, I can afford that as long as I watch my budget. I’m not really sure what I will do when/if the coupon expires in a year. At least it’s only a five-hour drive to Windsor, Canada, right?

I wish I could say diabetes in cats is common, but according to Dr. Google it only strikes about 1 in 200 cats. It’s most common in overweight, neutered, males like Java Bean. Genetics must be part of it too because Java Bean’s only been 13 pounds at his heaviest, whereas Officer Krupke once got up to 18 pounds and never became diabetic. On the bright side, some cats do go into remission after a diet change and some insulin therapy, so let’s all keep our fingers and toes crossed that Java Bean will experience that small miracle. Otherwise, I might be visiting Canada next year!