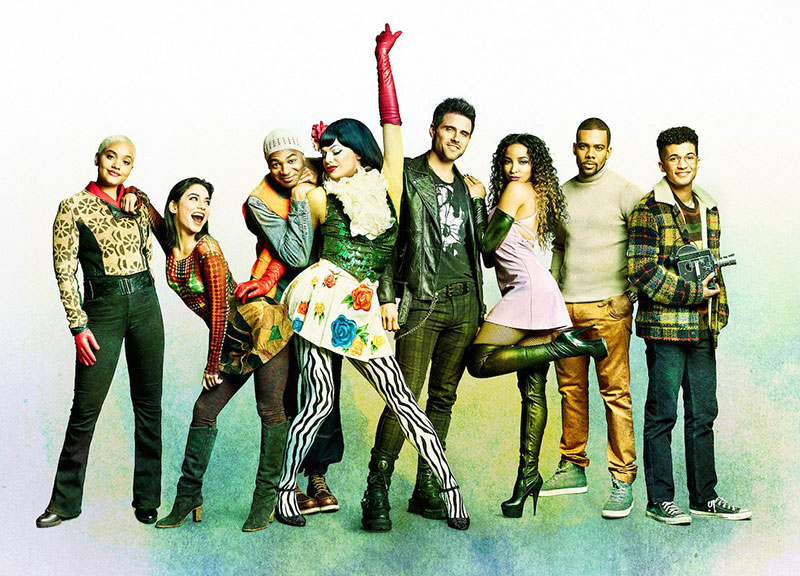 A lot of live TV musicals have played across the airwaves lately, but I’ve never been more psyched for one than RENT, which will be airing on Fox this Sunday at 8pm. Nothing instantly transports me back to the 90’s like music, but RENT is in a league of its own.

I’d guess it was my friend Fred who told me about the show. He was passionate about Broadway musicals and Tori Amos (yet I somehow didn’t figure out he was gay until he came out in college). RENT was liked by people my age who didn’t usually listen to musicals because it featured rock and pop songs performed by characters that weren’t that much older than us. It got so popular that some random girl on the school bus went out of her way to profess her love for the show when she saw me listening to the CD. I don’t think she would have said anything if I’d been listening to Into the Woods.

The characters in RENT always felt more real than other characters in musical theater, probably because their romantic relationships were tumultuous. They’d fight, then make up, have another fight, break up, and then get back together again. That’s what dating is like in your teens or twenties. In most musicals, a couple falls in love instantly and then for the rest of the show they fight against the world to be together. RENT felt like real life. It was also unique for having, not one, but two gay couples, which was pretty edgy in 1996 even for the theater.

I got so into this musical that one summer during college I listened to it twice in one day on my Discman while I sorted signature cards in a supply closet of a bank as part of my boring temp job. It was nostalgic to listen to the Original Broadway Soundtrack this week for the first time in years, though I used Spotify because my Discman is long gone. I was glad to discover I still loved the music. However, I did notice a few things that never occurred to me during my initial obsession with this musical.

When the Mark and Roger meet Angel, she sings a song about how she murdered someone’s pet dog for money. Yet, no one is frightened for their lives or concerned that she might be a sociopath. If someone I knew was a puppy killer, I would cut them out of my life as quickly as possible. When I was six years old, one of the neighbor boys stole some eggs from a bird’s nest and smashed them on the street, and he’s still fucking dead to me, that punk. It’s a good thing Angel didn’t kill John Wick‘s dog, otherwise it wouldn’t be snowing in “Christmas Bells.” It would be raining blood.

The only film we see of Mark’s is a video collage that plays at the end of the show. It looks like a bunch of random footage edited together of his friends. It’s nothing special. It’s like one of those end-of-year videos Facebook generates for you. And even though he gets praise for his footage of the riots, did he have any competition? In 1996 we didn’t carry video cameras with us everywhere, so his footage was probably valuable because it was exclusive. We can’t be certain it was good, even if Alexi Darling keeps trying to recruit him to Buzzline, because Mark himself says that show is sleazy. It sounds like the TMZ of the 90’s. That said, when Mark films a cop harassing a homeless person it seems pretty prescient of the world we live in now, so I guess he was on the front edge of exposing police brutality through video.

As for Roger, he spends the show writing “one great song” and when he sings it to a dying Mimi, it’s…meh. Underwhelming. It’s not terrible, but if you ask any RENT-head what their favorite song is, I doubt any will say it’s “Your Eyes.” I mean, Tom Collins sings “I’ll Cover You” to Angel in one of the most affecting parts of the play and that can’t bring her back from the dead, so how did Mimi get resurrected by a rip-off of Musetta’s Waltz? I read an article this week that said Adam Pascal, the original Roger, considers the song unfinished. The show’s creator, Jonathan Larson, might have tweaked it further if he hadn’t died suddenly during previews.

Anyway, these two should probably get day jobs.

It’s quite impressive that both of the celebrities mentioned in the lyrics to this show are still famous with active careers. Spike Lee just got his first Oscar nomination for directing, and Alec Baldwin has steady work impersonating Trump on SNL. These references have aged much better than the mention of Tom Cruise in The Last Five Years.

I’ve been self-employed for almost ten years and sometimes I’ll work in coffee shops when I need a change of scenery. I always buy something, even if I’m not thirsty. I consider it payment for the table and electricity, and I happen to get a complimentary drink with it. Mark frequently goes to the Life Cafe and sits around without buying anything. Mark, that is not cool! The proprietor of the cafe needs to clear their overhead or else the place will shut down. Get two dollars together and buy a damn tea already!

Benny isn’t all that villainous

Benny is framed as the villain in RENT because he “sold out” when he got married, but the guy isn’t all that bad. He does cheat on his wife and evict his friends and condone Angel’s dog murder, but…where was I going with this? Regardless, his proposal to create a workspace for his artist friends seems pretty reasonable. Of course, seeing how the Sundance Festival, San Diego Comic Con, and Coachella started out as events focused on art and now are big, fat commercial entities, I can understand Mark and Roger’s concern that CyberArts might take that course.

At the end of the show, Tom Collins gives Mark and Roger some cash he got from a hacked ATM. I hope his hack disabled the ATM camera. If not, he’s going to jail because that is straight-up larceny. I know money’s tight, but that doesn’t justify stealing money from the banks. What’s next? Is he going to start skimming credit card numbers? The man’s judgment is so clouded by grief that he’s spiraling into a life of crime!

I’ve heard some people complain that Mark and Roger are spoiled and annoying for singing about refusing to pay their rent and thinking they can live someone for free without getting jobs. This argument pisses me off every time because it is complete bullshit.

They’re not upset about the concept of paying rent for a place to stay. They’re upset that Benny has reneged on his verbal agreement to let them live in his building for free. This is discussed in “Tune Up #2”:

BENNY: I need the rent
MARK: What rent?
BENNY: This past year’s rent which I let slide
MARK: Let slide? You said we were “golden”

BENNY: The rent
MARK: You’re wasting your time
ROGER: We’re broke
MARK: And you broke your word – this is absurd

Imagine if a friend let you borrow her car for a week and said you wouldn’t have to pay for it. Then when you returned the car, she said, “I changed my mind. You owe me $300.” You would have every right to be pissed that your friend went back on her word. You might even sing an angry opening number about it in a Broadway musical.

If Roger and Mark had been singing about not wanting to pay rent in a traditional tenant-landlord relationship, then yes, it would have been annoying and stupid and entitled. But they’re not! They’re pissed that their friend is demanding back rent he said would never be due! Of course, they’re burning shit and belting angsty lyrics about it! If they’d known about those costs, they would have managed their finances differently or found a more affordable place to live.

To make things worse, Benny doesn’t really want the rent. He’s using the threat of eviction as leverage against Mark and Roger to get them to shut down Maureen’s show. It’s all rather underhanded and sleazy.

However, all three of them are idiots for never getting an agreement in writing. What kind of landlord doesn’t get his tenants to sign a lease? Super sloppy, Benny. What would Muffy’s father think? And Mark and Roger were naïve to rely solely on Benny’s word, particularly if they knew how morally challenged he’d become. They should have drawn up a simple contract on paper and this situation would have gone down very differently. If Mark and Roger ever make royalties from their art, I hope they get things in writing first.

To complicate things further, Joanne points out in “Happy New Year” that Mark and Roger are squatters. I’m not sure what the laws about squatters were in New York in 1996, but they sometimes do have rights. I’ve heard about Airbnb operators who’ve faced nightmare scenarios when they’ve rented their house for more than 30 days and the renters refuse to leave. In some states, that means you can’t kick them out without going through an eviction process that can take months. So, Benny might well have been breaking the law by kicking Mark and Roger out the way he did.

Anyway! Despite all these observations, I still adore this musical and it holds a special place in my heart. I know it has its flaws, but they’ve never bothered me that much. It will be interesting to see if the Fox production makes any changes to the show. Do kids today know what answering machines are? Have they ever seen a phone booth?

I have faith any changes will be handled with care because the people in charge also produced Jesus Christ Superstar that aired last Easter which was amazing. It was by far the best live musical I’ve seen televised since Carrie Underwood kicked this whole thing off with a kinda awkward production of The Sound of Music in 2013.

RENT might remind me of the 90’s, but it also reminds me that there’s no day but today! (Except for this Sunday.)