Last week the weather widget on my phone let me know that it would be -10 degrees outside at midnight with a wind chill of -20. I can’t recall experiencing weather that cold before. These are the days when Indianapolis lets me know I’m truly not in North Carolina anymore. Another clue is that the bottom of my window looks like a refrigerator that needs to be defrosted. 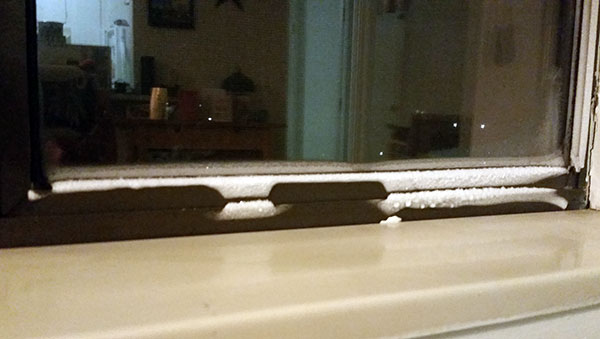 (That frost is hard too, not something that can just be brushed off.)

I opened my door at midnight so I could experience what -10 weather feels like. It’s cold of course, but the air feels painful to breathe, like it’s got tiny needles in it. And your nose hairs freeze almost instantly. Just leaning my bare upper arm on the edge of the door for 10 seconds left me with a burning feeling on my skin. The experience made me grateful to have a warm, dry apartment, even if my heating bill is definitely going to be more than $100 this month and the stinkbugs have migrated inside to enjoy the warmth too.

Other than those 20 seconds when I opened the door, I’ve stayed inside for most of the past week. It’s one of the many perks of working from home. Unexpectedly this cold snap has been good for both my weight and my budget. I haven’t run out in the evening to buy candy because even I don’t think a bag of Kit Kats is worth bundling up in three layers and possibly slipping and sliding down the stairs. My out-of-pocket limit on my health insurance reset on the 1st, and I don’t want another $6600 bill for a broken arm. I try not to be too superstitious, but I get a bit nervous just wearing the same sweatshirt I had on at the time of the accident. And I definitely don’t wear that sweatshirt with the same underwear I had on that night!

Instead of spending money eating out or heading to the grocery to buy food, I’ve been eating whatever is in the cupboards, which has led to some interesting discoveries. For instance, peanut butter with a “best by October 2016” date is still edible! And hiding behind that long-forgotten jar of peanut butter was a honey bottle I’d placed upside-down because there was only a bit of honey left in it. In the year since I forgot about it, the honey had crystalized and became quite a tasty treat. And last night I cooked a feta and spinach chicken recipe I haven’t made in a while because I hate cooking, but not as much as I hate going out in -10 degree weather. This also led me to discover that mayonnaise with a “sell by July 2017” date will not kill you if you bake it in the oven at 375 degrees for 45 minutes!

The only time I bothered to leave my apartment complex this week I did so partly to be sure my car would start. Oh, hey, I got a new car in November! It’s a 2014 Honda Civic. I would take a picture, but that would require me to go outside, which we’ve established is a non-starter. So here’s a picture of it from Cars.com instead: 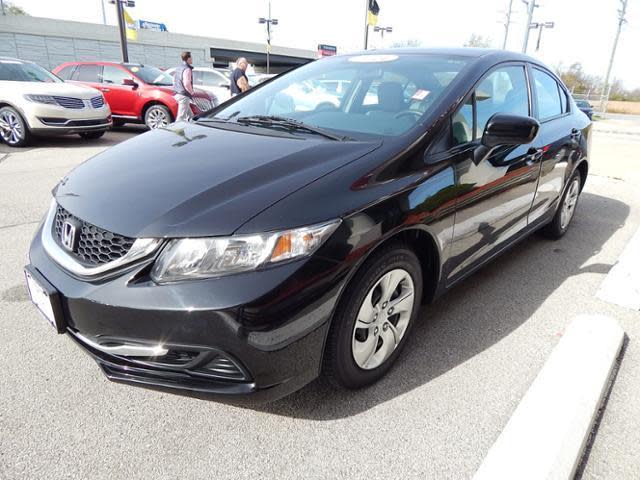 I’m surprised by how protective I’ve become of it so quickly, but I love that little car and NO ONE SHOULD LAY A HAND ON IT BUT ME. The nice thing about owning my old crappy car was that I didn’t care if anything bad happened to it, as long as I wasn’t inside it when the bad thing happened. I did love my old 2002 Saturn, but when she stalled out at a traffic light on my way to get it appraised, I knew I was making the right decision to finally replace it. The front seat couldn’t be adjusted forward or backward. The power locks had been possessed by a poltergeist again, so I’d pulled the circuit breaker, which strangely resulted in the driver’s door becoming unlocked whenever I closed the trunk. Oh, and the engine had been leaking a small amount of oil for almost two years. Unfortunately, a pipe leading out of the engine was rusted and would have fallen apart if they tried fixing the leak, which means they would have had to rebuild the top of the engine. That wasn’t worth the money, so I kept a bottle of 5W-30 in the trunk for top-offs and treated the environment horribly for 24 months instead. Sorry, environment! It was a really small, slow leak, if that makes anyone feel better. If it had been bleeding oil, I would have replaced it much sooner. And thankfully Indiana doesn’t do emissions testing like North Carolina does, so that bought me even more time. It was quite a workout scrubbing all the burnt oil stains off the hood before I traded her in.

I got 135,493 miles out of her, but her time was up. I’ve had a lot of fun driving her replacement around. There’s nothing like upgrading your car’s technology by 12 years. The screen displays what songs are playing on my phone via Bluetooth! There’s a backup camera! The car calculates the MPG for me! It’s crazy! Hopefully I will have this car for a long time. I’ve actually contemplated the fact that the next car I buy might be self-driving.

In the “not-so-fun” department, the Greenwood police evidently have nothing better to do than randomly run people’s license plates even though they’re not breaking the law. That’s why I got pulled over a week after my purchase on my way to my Mom’s because my registration did not yet match my plates. The dealership hadn’t sent the paperwork for that yet. Ironically, I was taking the road I was on to avoid a speed trap on Southport Road which I know for a fact two cops patrol, but I got pulled over anyway because I couldn’t avoid a cop pulling up behind me in mall traffic. Thankfully I had the sales paperwork from the dealership in the glove compartment and the cop believed my story. Yay, white privilege! The whole thing was really stressful though, particularly since I hadn’t been pulled over for 15 years (see again, white privilege) and the last time it happened I got my first headache that wouldn’t go away. No new headaches have arisen since this incident, just the one I’ve always had. After that, I became hyper-vigilant of any police cars, like I was playing Grand Theft Auto in real life.

Anyway, I know I didn’t blog much in 2017, and I don’t really regret it. That was a pretty fucked up year for so, so, so many reasons. I only wrote 10 entries and 3 of them consisted of me pleading to keep my health insurance. Hopefully I’ll write more than that this year, and I pray to God I don’t have to write about health insurance again, but I make no guarantees. That said, if the weather stays this cold I’ll have plenty of time to stay in and write!