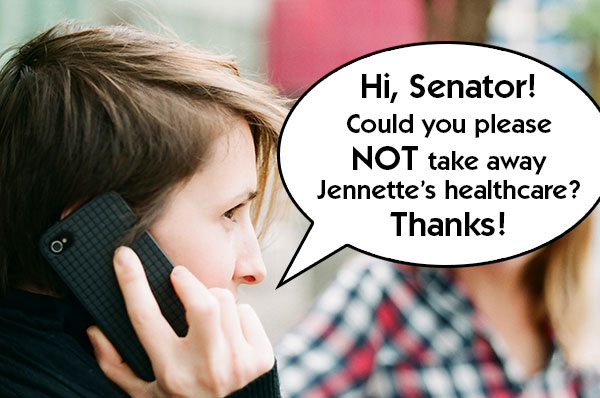 It’s hard to plan your life when you don’t know if you’re losing your job or not. Ever since Election Day, I knew the Affordable Care Act was in danger, and if the ACA goes away I go out of business. This is a direct cause and effect relationship. As a freelance web designer with a chronic headache, I was denied an individual insurance policy several times in the days before the ACA. My headache is definitely not going away, but if the ACA goes away I will no longer be able to get health insurance as an individual. Thus I would have to sell 40 hours of my life a week to a company that would provide insurance for me. Though even that backup plan has been endangered with proposals like the “skinny repeal” that was up for a vote not too long ago that would have eliminated the rule that companies with over 50 employees must provide health insurance. I don’t know what I would have done if that had passed. I’d probably die in a ditch behind the hospital, penniless.

These past 10 months have been pretty stressful for me. Besides the constant dark cloud of possible death or medical bankruptcy in my future, when you don’t know if you’re going out of business it’s hard to plan your life both personally and professionally. My car is falling apart, but should I take out a car loan when I don’t know what job or salary I’ll have in a year? Should I renew my lease or look for a cheaper place to live? This looming threat has also made me hesitant to take on any large work projects because I might be forced to drop all my clients on a few weeks notice and take a full-time job that I may or may not enjoy. I was seriously job hunting for the first few months of the year in anticipation of the worst, and honestly, I’ve still got an eye on the market because who the hell knows what will happen? I say all this as someone who previously worked in the newspaper industry for a year and a half, which was not a stable place to be employed, but at least then I knew I’d get 18 months of COBRA if I got laid off. If the ACA goes away it’s just me and that ditch behind the hospital.

AHCA was the first attempt to create a healthcare bill in the House, and when it quickly tanked I was gleeful. Until it came back, changed its name to BCRA, and I ate a lot of ice cream. Then that too tanked, and again I was gleeful! Until, it came back as “skinny repeal,” and I ate a lot of cheesy bread which did not help me become skinny. And then I watched that tank at 1am on Twitter while reading tweets about the body language of certain senators. Then it stayed tanked for over a month, so I was pretty happy and felt like I could start planning my life again. Until now, once again, it has come back with yet another name, the Graham-Cassidy bill, like it’s a criminal with four different identities. It reminds me of a plantar wart I had on my toe five years ago. I’d treat it with salicylic acid until I thought it was gone, but then it would come back again. So I’d treat it with more salicylic acid until it looked like it was gone for real, but then it would came back again. This went on for months until I finally went to the dermatologist and had it frozen off. That is what this healthcare legislation is. It is the plantar wart of Congress. You think it’s gone, but it keeps coming back, and it needs to be frozen off for good.

It’s crazy the amount of anxiety this has caused in my life. This New York Times article from July interviewed a lot of people like me who have good reasons to be stressed about the ways it has affected our lives, as did this Vox article. It’s crazy that I have to keep calling my representatives every other month to ask them not to kill me. Yes, I still don’t want you to kill me! Why must I keep reminding you?! Any bill that is going to take away coverage or raise costs is not a bill I want. I feel so much empathy for the Dreamers and the transgender members of the military who are also facing great uncertainty in their lives because of this administration. This presidency has been so bad for so many people and their mental health.

This latest bill, the Graham-Cassidy bill, hopefully won’t pass. But it’s not guaranteed that it won’t pass. So until it is finally dead and gone I am asking you one more time to light up your phones and make some calls. At first I was just asking people who lived in states with Senators that are swing votes to call. But screw that, let’s all call them! Flood those phone lines! No matter where you live, give these senators a call and let them know you would like Jennette to remain insured at a reasonable rate with decent coverage and to be able to resume planning her life and not be stuck in a constant haze of man-made uncertainty.

You might be thinking to yourself, “Geez, you want me to do this AGAIN? Seriously?” Yeah. It sucks. It makes me want to smash things. It makes me want to strangle people. We all have better things to do with our time than call our Senators over and over again. The last few days I’ve been half ignoring the thing, hoping it would go away on its own, but it hasn’t. I thought I was done with this for the year. But I’m not. They have until September 30 to pass this because of certain rules in the Senate. So until the end of September I have to fight yet once again to prevent people from taking away my healthcare and putting me out of business. And I might have to do it again next year. This might be my life from now on, writing blog entries at 2:30am and begging people to call their Senators for the rest of eternity, like some weird, post-modern Sisyphus.

I know calling people can be scary. Losing my job and my healthcare is even scarier, so I hope you’ll choose the least of two scary things. The people who answer the phone have never argued with me. Just call, say what you need to say, and then give them your name and address if they ask for it. That’s it. The goal here is to let them know how unpopular this is and that people will notice if I get thrown under the bus, which will be expensive if I don’t have health care.

Here are the phone numbers:

If you make a call, thank you. I really appreciate it. And if you don’t, do you know any companies with health insurance that are hiring a WordPress developer?

Later: James and the Giant Road Trip
Earlier: Two months of physical therapy a.k.a “How was your weekend?”
Home: Main blog index