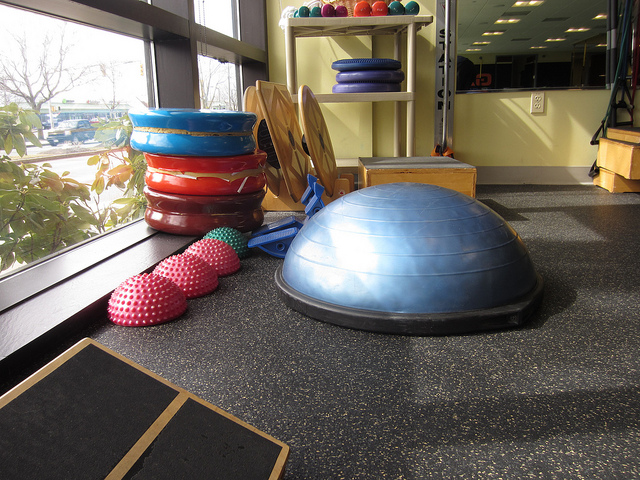 I decided to go to physical therapy because the arm I broke in February was still hurting when I used it in certain ways, and it was sort-of-but-not-really free. I didn’t have to pay any extra for it, but I did have to pay my $6600 out-of-pocket maximum and $4779 in annual premiums, so that shit was not free. It’s more like I paid for the all-you-can-eat medical buffet and I took it to heart, or, um, to stomach? A few years ago I’d done 5 or 6 physical therapy appointments when I sprained my ankle, but this treatment was more intense and longer since my injury was worse. Ultimately I had 17 appointments over the course of two months.

Personal trainer
Physical therapy is as close as I’ve ever come to having a personal trainer, and it made me see why having a trainer can really help. Having a regular schedule forced me to show up two days a week to exercise for an hour. Most of the time I did not want to go exercise for an hour, but I’d made the appointment, and my insurance was paying for it, so I went. It was a big win for accountability.

It was also great that I didn’t have to plan my workouts, I just did what they told me to. There’s a certain amount of mental energy that goes into planning which I did not have to expend. It reminded me of a comic I’d seen recently about the burden the mental load puts on women who manage households, but I think that concept of a mental load can also be applied to creating your own exercise routine or planning meals as well.

How was your weekend?
Since you’re standing around lifting things repetitively for long periods of time, the need to make small talk arises. Because I was showing up twice a week, the go-to question at my first appointment was, “How was your weekend?” and at the second appointment, “Do you have any plans for the weekend?” I don’t think I had a single appointment where weekend plans did not come up. It got to a point where I felt pressure to make more interesting plans or just make stuff up instead of telling people I intended to lie around my apartment all weekend. One weekend I had plans to visit family in Delaware and it was a huge relief to have something of substance to discuss in regards to the weekend.

Cool toys
One fun thing about physical therapy is that they have lots of cool toys. Over the course of several visits I would slowly learn what the toys were for when I saw fellow patients using them. There were two long, heavy ropes that one guy got to wave up and down like a bizarre version of double-dutch. There were stability balls, a trampoline, hurdles, steps, and other assorted things that I could only guess at what they were for. My favorite toy was the Bodyblade which is a long, bendable, for lack of a better word, stick, that I got to wobble back and forth with my left arm for 30 seconds straight in 3 sets. I liked it because I could tell I was making notable progress over the weeks, being able to wobble it for longer periods of time without stopping. I found myself wishing they had a parachute we could unfurl and play games with like we used to back in grade school during PE class, though Chris C. had broken his collarbone that one time, so maybe that would have been too dangerous.

Island of misfit toys
When I wasn’t playing with the toys, it felt like I was a resident of the island of misfit toys. There would usually be anywhere from 1-3 other patients in the room doing exercises and we all had our own issues. One woman had something seriously wrong with her foot. There was a kid who always wore a Colts jersey who’d done something to his knee. There was 40-something woman who had to use a walker to get around. And at my last appointment there was a woman who kept complaining a lot and I couldn’t help but think she was sabotaging herself. You have to go to your appointment ready to work, otherwise you shouldn’t bother going at all. I felt bad that she was clearly tired and in pain, but as someone who lives with chronic pain I know that your attitude towards it modulates how much you suffer from it.

Stretching and ice
During every appointment my physical therapist would spend at least 5-8 minutes stretching my arm, bending it into different positions to help increase mobility. It would hurt sometimes and it wasn’t exactly a massage, but it was strangely nice to be getting some personal attention for my arm. After that we’d put ice on it for 12 minutes to help keep down inflammation. I’d usually read the newspaper on my phone then and it was nice to have a bit of time just for myself when I couldn’t leave or do anything else.

Results
One of the best things about physical therapy is that you do start to see results. Over the course of two months I moved up 2 pounds on my bicep curls. When I carried kitty litter up the stairs to my apartment it felt lighter than it had before therapy, which was proof I was getting stronger. I was definitely getting better.

The only real disappointment is that physical therapy did not completely fix me. My arm still hurts when I use it in certain ways, like turning the steering wheel of my car to the right, though it doesn’t hurt as much as before. I thought I would bounce back from a broken arm rather quickly, but it’s been over 6 months and I still feel its effects in my body. I’m not sure if that’s because the break was so bad or if it’s because I’m in my thirties and not my teens. I dunno. I do feel like my body is a car that is accumulating more and more dings and dents and has started requiring replacement parts, but I’m never going to be able to trade it in for a new model and will just have to drive it into the ground until one day it completely breaks down for good.

When those 19 people got plowed down by a car in Charlottesville a few weeks ago, I felt a lot of empathy for what their recovery process is going to be like. I’m sure they’re all grateful to be alive, but they must have sustained significant injuries and there were probably lots of broken bones. It’s likely some of them will have chronic pain for the rest of their lives, and if they did break a bone they’ll be more likely to develop arthritis. That stuff sticks with you. I just broke one bone in my arm and ended up spending 17 hours in physical therapy because of it. I can’t imagine what they’re going to have to deal with.

It was good to graduate from physical therapy, but I do miss the accountability it forced upon me. My arm is in decent shape, but still not 100% better. It might never be. But at least I don’t have to chat about my weekends anymore.