I know that sounds melodramatic. “Aaahh! I may die if you don’t call your Senator! I’ll go out of business!” Unfortunately it’s true. This week the US Senate is planning to vote on a healthcare bill that allows states the option to remove the essential minimum benefits covered in every health insurance policy. This means they can sell policies that basically don’t insure anything. So even though people with pre-existing conditions like me can’t be charged more than other people, they can be offered only plans that don’t insure hospitalizations or prescriptions or cancer treatments or mental health, which has the same ultimate effect. If a policy doesn’t cover prescriptions or hospitalizations, why would I want it? That’s like buying a car without an engine or wheels. Where do you think you’re going in that thing?

If this bill passes it means two things for me:

1) I might die or go bankrupt
If I can’t get a health insurance policy that covers my basic needs, the probability of me dying or going bankrupt significantly increases. If I trip over another space heater and break my arm again, I could be on the hook for all $65,000 of the expenses it generated. The bill below shows the first $55,000 I was charged before follow-up appointments, physical therapy, and prescriptions increased the final cost. I hope I’m not alone in this, but I don’t think I should have to declare bankruptcy because I tripped and fell in my living room. If something worse were to happen, like a cancer diagnosis, I could literally die without coverage. 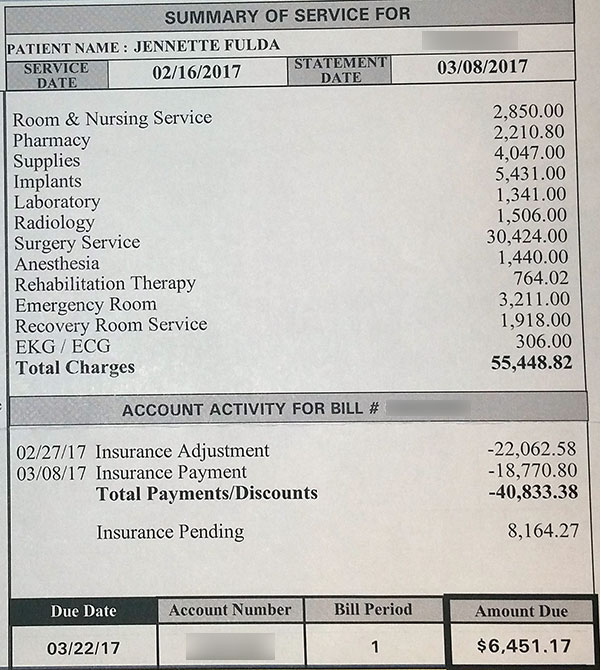 2) I will be forced to go out of business
I’m currently a self-employed web developer, but if I can’t get decent coverage on the health exchange anymore, the only other place to find it is with an employer. I know that sounds easy in theory, but it’s not. Since election night I have been watching the job market because I knew there was a chance the ACA might be repealed. In the past six months I’ve seen maybe 3-4 job web developer jobs that seemed like a good fit for me, but none of them offered health insurance. The “gig economy” has been gaining traction, which means more and more people work as contractors rather than full-time workers with benefits. That’s fine if you can buy decent insurance that’s not linked to your job, but that won’t be possible anymore if this bill passes. And even if I do find a job that suits my skills and offers benefits, it’s still possible that the changes this bill introduces means that policy might not cover my basic needs. Or I might have to take a massive pay cut and take a job I’m overqualified for just to get coverage.

Obamacare has allowed me to become self-employed, running my own business and doing the work I enjoy. That’s basically the American dream, right? If the this bill passes in the Senate, that dream is dead. And I might be too.

Other people will suffer too
If my sad tale isn’t enough to get you concerned, people other than me will be affected too. The Congressional Budget Office says 22 million more people will lose insurance by 2026 because of this bill on top of the 29 million already uninsured, bringing the total to 51 million. It will throw a lot of children and disabled people off of Medicaid, and disabled protestors are literally being thrown out of the building when protesting this in DC and here in Indiana. Older people can be charged more than they are under the current law. And one of the latest changes to the bill means that if you have a lapse in coverage you have to wait six months before you can get it again, which is a lot of time for things to go terribly wrong when you’re in poor health.

So why pass the bill? The goal seems to be to take money from poor, sick people and give it to the rich. It’s really a tax bill masquerading as a healthcare bill. That might be why it’s so unpopular. A recent NBC News/ Wall Street Journal poll shows that only 16% think the Senate bill is a good idea, whereas 41% of people think Obamacare is a good idea. The American Medical Association has gone so far as to say the bill violates the “do no harm” principle of medicine.

I know the ACA is far from perfect, but this bill won’t make things better, just worse. If Republicans could put together a plan that actually makes things better I would support it. America pays ridiculous prices for healthcare, far more than other countries, which is why you hear about people traveling to Canada to get prescriptions filled. If something could be done about that, it would have a huge affect. I was only in the hospital for two days and I somehow managed to use over two thousand dollars worth of drugs, which doesn’t even count the anesthesia.

Ok, I take pity on you. What can I do?
The only way to stop this bill from passing is to make some noise. It’s now or never time. The vote could happen as soon as Thursday, June 29th, which is in two days! That’s by design. Senators go back home next week and the leaders know the bill is more likely to pass if they vote before they hear from all their angry constituents in person.

If you have a Republican senator, let them know you don’t approve of this. Tell them to make changes that actually improve the healthcare system, which this bill does not do. Call them every day. You can find your senator’s contact information here. If you have phone anxiety, just leave a message on the voicemail. Or send an email. Every little bit helps. If you have a senator that’s voting against the bill, call them and thank them for doing so. Ask your friends to do the same. Tweet it, Facebook it, Instagram it, or use whatever the cool kids use these days. If you live in Alaska, West Virginia, Maine, Nevada, Arizona, Colorado, Ohio, Pennsylvania, Louisiana, or Arkansas, your Senator is one of ten most likely to flip. Please, please, please call them, and if you know anyone who lives in those states, ask them to make a call too.

The only thing that can beat this bill is a strong movement. You are my only hope, which is why I’ve been pleading and begging people on Twitter and Facebook and this blog for help for months even though I know it’s annoying and you’re getting sick of hearing about it. It’s literally life and death for me, which is why I’ve continued asking for support even though it makes me uncomfortable and I’d rather be doing other things. I know I have several regular readers that live in foreign countries, and this must all seem insane to you. I remember one commenter once called it “barbaric.” It’s sad that I live in a country where I have to routinely call my representatives and ask them not to pass legislation that might kill me and will definitely kill thousands of my fellow Americans. But that’s where we’re at. I hope you can help stop that from happening.

If not, I honestly don’t know what will happen to me.

Resources
If you want to learn more before you call, here are some good resources.

Trumpcare Ten
This site has information about the 10 Republican senators most likely to vote no on Trumpcare. If you live in Alaska, West Virginia, Maine, Nevada, Arizona, Colorado, Ohio, Pennsylvania, Louisiana, or Arkansas, please, please, please call your Senator!

Washington Post – What the Senate Bill changes about Obamacare
Nice comparison chart showing the differences between the ACA, the House bill and the Senate bill.

A Sick Freelancer’s Guide to American Health Care Insurance – May 2011
If you want to know how crazy things were before Obamacare, and what will happen if it’s repealed, read this post I wrote in May 2011 about everything I had to go through to try to get insured before the ACA existed.