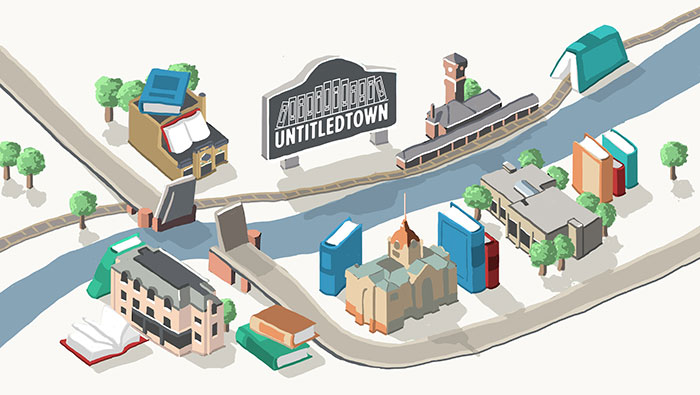 When Jen Larsen got sick and Wendy McClure’s Skype connection went down, I was the sole original member of the Untitled Town Book Festival’s “Blog to Book” panel to make it to the actual panel. I win! Or is that losing? I’m not sure. Thankfully Kate Harding saved my bacon and swooped in to take Jen’s place, so this remained an actual panel discussion instead Jennette Fulda trying to entertain a room of people for 75 minutes. Here’s a selfie Kate took right before the internet died. 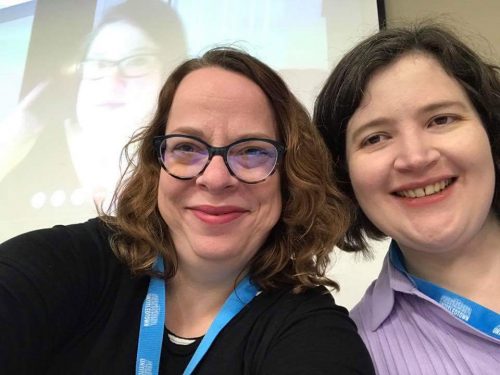 Our moderator, Toni Severson, made it as well and did a great job, but I think we would have run out of questions if I’d been the only other person at the table. I never got an official explanation, but I think the internet went down at the library because too many people were connecting to the wireless router at once. I’ve seen that happen at other conferences. Other than that and poor sick Jen, the panel went rather well. When I was talking, Kate would text Wendy a question and read off the answer later, so she was still somewhat present even if her Skype connection wasn’t. We got to share some knowledge, relive the glory days of blogging, and the crowd seemed fairly engaged and asked good questions. And there were some totally cute book flowers outside the library that I thought were a permanent decoration, but were something especially designed for the festival. 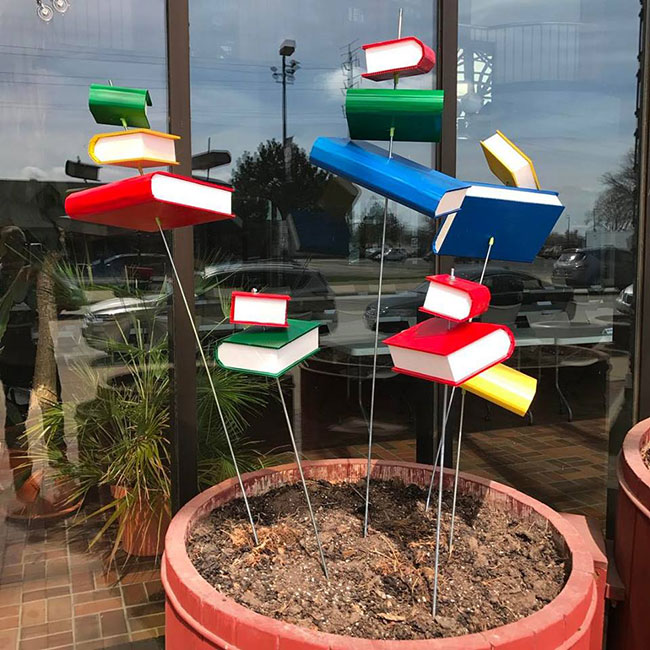 Overall the Untitled Town Book Festival was quite a success! Though it was a bit odd to be staying in a hotel room with a picture of the Green Bay Packers on the wall. 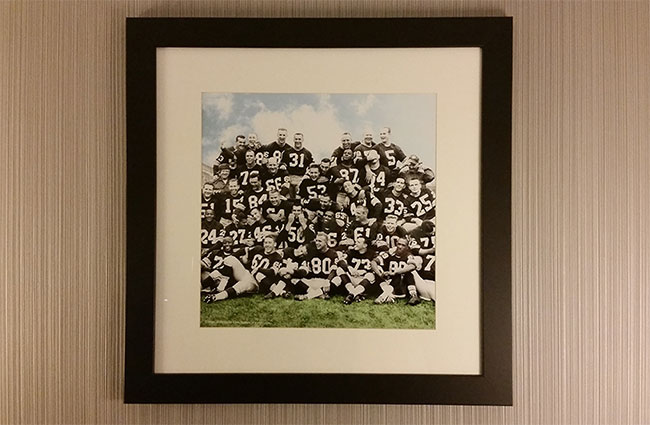 The bathroom mirror was right across from the glass shower stall, so you could look at yourself while you showered, which was an experience I could have done without, thanks, Hampton Inn. Granted, it was better than having the Green Bay Packers watch me showering. Otherwise, the festival was great for catching up with friends and meeting new people. I enjoyed spending a weekend absorbed in something which distracted me from the slow destruction of my country’s democracy. The only narcissists allowed here were the authors! Seriously though, it was nice to step away from Twitter and Facebook and the endless stream of very, bad news for a few days. It’s important to stay informed and fight back, but I think it’s just as important to maintain a life outside of that to keep you sane, if you’re privileged enough to have that option. I didn’t get to attend as much of the festival as I would have liked though, and I blame this on Chicago traffic. 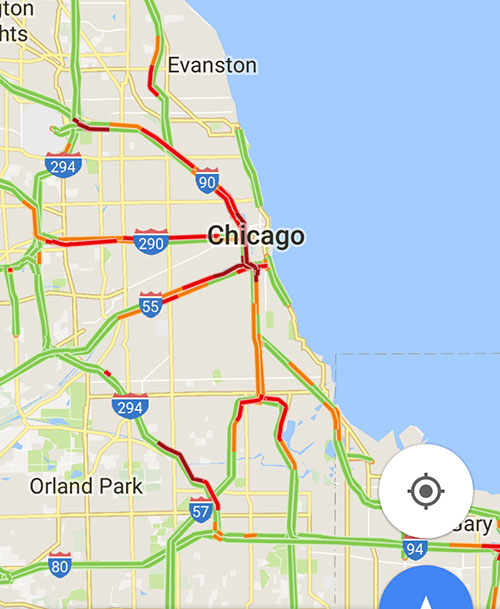 There is no reasonable route to drive from Indianapolis to Green Bay that doesn’t include the greater Chicago area, and as you can see in the screenshot I took when stuck in a traffic jam, there was no way through Chicago without hitting red lines indicating significant delays. I suppose I could have flown, but I have a fear of flying that has nothing to do with crashing and dying and everything to do with how I would be treated on a flight. ANYTHING COULD HAPPEN. I could be dragged down an aisle or kicked off because of what I was wearing or ridiculed by fellow passengers or God knows what else. Flying seems like a horrible nightmare experience, one I will avoid even if it means spending most of the day driving.

I’d originally planned to drive up Friday and spend Saturday and Sunday at the festival, but after some research I learned Friday is the worst day of the week for Chicago traffic. So I drove up on Saturday instead, and still encountered an accident that shut down two lanes of I-294 and caused a 45-minute traffic jam. I listened to an entire episode of Fresh Air while sitting there. All-in-all it took about seven and a half hours to get to Green Bay. I attended an author party on Friday night, my session on Saturday, but I also had to fit some naps in there to soothe my chronic headache, so the only other event I attended was Margaret Atwood’s talk. She was awesome and she brought a puppet. I shit you not.

I’d prepared rather well for this trip. I’d gotten the oil changed. I bought a new bottle of oil to top off the super-slow leak I’ve had for over a year that would cost over $1000 to fix. I’d bought a cradle mount for my phone so I could use it as a GPS, which was rather helpful because it was able to reroute me around an accident in Milwaukee on the way back. I also remembered to renew my AAA membership that was going to expire the day before I drove back. If I hadn’t, that pretty much would have guaranteed my car would have broken down on the way home.

Do you know what I forgot? The tolls. Oh, the tolls. Or, “ow” the tolls would be more accurate because I had to pay cash, which meant I had to roll down my window with the arm I broke 10 weeks earlier, which OH MY GOD, HURT SO MUCH. I had to do this 8-10 times round trip, and there was pressure to do it quickly so I didn’t slow down the line. It’s surprising how much force it takes to roll a window up and down, but trust me, it’s a lot. The first thing I did when I got home was to order my own iPass, an electronic transponder that automatically pays tolls for you, so I would never have to experience this hell again. The tolls are also 50% cheaper if you have an iPass. Paying cash cost me about $20.

If you’re trying to calculate the tolls in advance, don’t use the official Illinois Tollway trip calculator. It’s impossible to figure out. It wants you to select which toll plaza you’re entering and exiting at, like I would know the names. All I know is what highways I want to take. I found the InfoTalk Toll Calculator app for Android to be much more helpful because it lets you enter a route and figures out the tolls for you. Though right now as I was checking the links for this post I noticed you can right click on the map on the official tollway site to set start and end points. They really need to make that more obvious and intuitive to figure out because I did not catch it the first time around and I make web sites for a living.

The most fun thing about driving through Wisconsin is seeing all the cool Native American names used for cities like Waukegan, Kenosha, Sheboygan, and Manitowoc. Otherwise the countryside is pretty much the same as Indiana, though with more silos.

Anyway, big props to everyone who made the festival a success! I hope to attend again next year, this time with an iPass.

Photo credits: The selfie of the panel was taken by Kate Harding. The photo of the book flowers is from the UntitledTown Facebook page and I don’t know who took it. Feel free to email me if you’re the photographer and want credit.

Later: I didn’t use Twitter or Facebook for a week and I feel fine
Earlier: My body, my blog, and the Untitled Town Book Festival
Home: Main blog index