Most writers have a stack of rejection letters, but I keep a stack of health insurance application denial letters (a.k.a. piss-off-and-die letters). If the Affordable Care Act is repealed, insurance companies will be sending out thousands of these things every year to people like me. If you don’t understand why repealing ObamaCare will be bad for so many people, here’s some proof in JPG format.

Here’s the letter I got in 2009 when I’d started my own web development business, adding one job to the economy. I was not rewarded for this when it came to my health care. 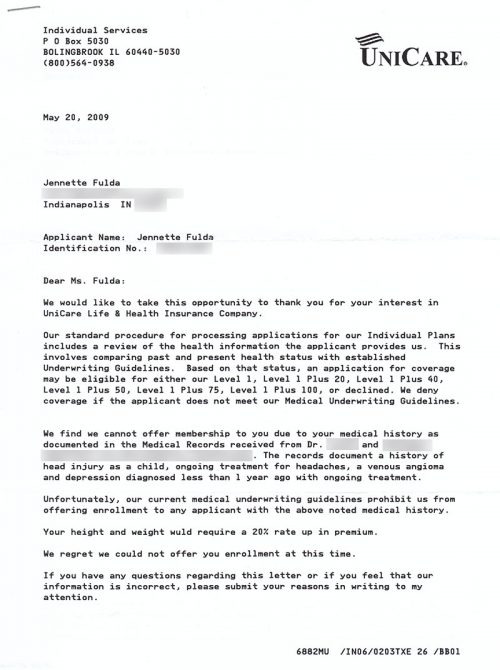 The thing I find most ridiculous about this letter is that the head injury they mentioned I sustained as a child was this time my brother whacked me in the head with a flashlight. It hurt, but I didn’t get a concussion or a fracture or anything. I only mentioned it to my headache doctor because they spent an hour getting a full medical history and insisted I mention any time I might have been hit in the head. Also, the depression was caused by the unrelenting headache, so it felt like I was getting dinged twice for the same thing. I also love the part where they basically say, “You’re so fat, we’d have to charge you 20% more,” particularly since I was within 20 pounds of my lowest weight at that time. I was eating healthy and exercising regularly but my BMI still counted me as overweight, so none of that mattered.

Here’s the denial letter I got in 2010, which I needed to qualify for the North Carolina Inclusive Health Insurance program that covered high-risk individuals like me before the ACA existed. I knew I would get denied, but still had to spend an hour on the phone with a representative reviewing every medication my headache doctor had thrown at me in the last two years so I could get this letter for my application. 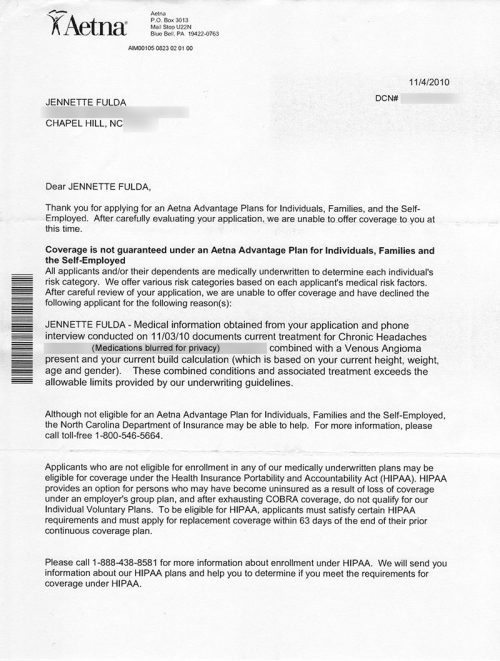 At this point I’d gained some more weight, so now my obesity disqualified me completely for coverage, though the headache stuff sure didn’t help either. As for the HIPAA eligibility thing they mention, the details on that get kinda boring (unlike all the other fascinating parts of health insurance law), but basically I never had to go that route because North Carolina had a high-risk pool I qualified for. And if I had been forced to do the HIPAA eligibility thing, I think there might have been a one or two month gap in my insurance, and I’m not sure if there were limits on premium prices or minimum benefit requirements. No one goes out of their way to tell you about any of that either, so if you missed the 63 day window to apply you were screwed. Plus, all that only applies to you if you were previously on a group plan. In either case, without the ACA I would not have been able to move out of the state of North Carolina unless I got a job elsewhere that provided me group health insurance. Or married someone with insurance, I guess. Not a great situation.

I also had a denial letter from 2003 or 2004 when I applied for individual insurance when I got my first job as a contractor. However I shredded that last year before my move along with some other personal papers so no one would break into my crate and steal my identity. It was 13 years old and I thought we were done with this shit, so it was enjoyable to shred that paper piece of misery. Now I wish I’d taken a photo of it, just for posterity.

The ACA made it illegal to deny people because of pre-existing conditions. To receive each of these denial letters, I had to fill out applications at least 15 pages long because the health insurance companies wanted a full medical history so they could weed out people like me. Now that the ACA exists, my last application was only 4 pages long.

So, that’s what my past looks like. And that’s what my future looks like if the ACA is repealed. If this bothers you even a little bit, please call your representative and let them know. Calls are given more weight than emails. You can find your congressperson here: http://www.house.gov/representatives/find/ And your senators are listed here: http://www.senate.gov/senators/contact/

Later: It’s hard to type when you break your arm
Earlier: 20 Scattered Thoughts after the Election
Home: Main blog index