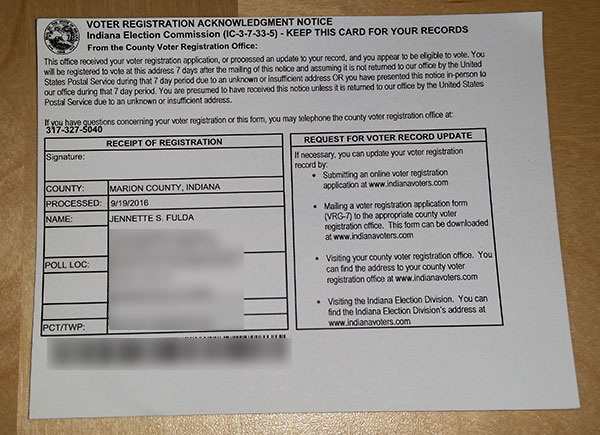 I’m not talking about the move. The move was as hard as expected, if not more so. I am talking about updating my Indiana voter registration. I relocated to the Hoosier state earlier this month, and I’ll write more about all of that when I’m not so damn tired and my head doesn’t hurt so much. But I thought I’d pop in for a moment to give major props to the Marion County Board of Voter Registration. You guys are on top of your shit!

One of my biggest concerns before my move was making sure I updated my voter registration in time for the presidential election. This is the most important election of my life, and even though I know Donald Trump will win Indiana’s electoral votes, I feel the need to vote against him anyway so I know that I did what I could to stop our country from being taken over by racism, misogyny, and bigotry. I also need to vote in the down ballot races so if the worst happens and Trump somehow becomes president, I can help prevent Congress from being controlled by Republicans.

When I was preparing for my move, I had a list of about 26 things I had to do before I left North Carolina. Some of these things were simple to pull off, like buying packing tape. Others become drawn-out torture scenarios requiring multiple phone calls nagging someone to do something they should have done after the first phone call or following up on something they really should have gotten back to me about on their own. (One task required that I use a fax machine. Aaaahhh!) I figured updating my voter registration was going to be more like the latter since it involved a government organization.

I read the registration requirements and learned I’d need to send in an application along with a “current utility bill, bank statement, government check, paycheck, or government document that shows your name and address” before October 11. I wasn’t sure if I would get a utility bill before the 11th, and the only other one of those things I would get is a bank statement. However, my bank reporting period ends on the 12th of the month and I signed my lease on the 8th. So you can bet the first thing I did after signing was to change my address with the bank online to be sure I’d get a statement in time to register. When I got the statement I mailed it along with my registration form on Friday, September 17th. I figured I would check my status on the Indiana voter registration site every few days, and if it got to be early October before I heard from them, I would be sure to get my driver’s license before the 11th since they allow you to register to vote online if you have an Indiana license.

So you can imagine how enormously surprised I was on Thursday when I opened my mailbox and found my voter registration card inside. It only took five days, and two of those days were on the weekend! I mailed it on a Friday, so it probably got dropped at the office on Saturday. According to the card they processed my registration on Monday, and then the notification card was postmarked to me on Tuesday. That is crazy efficient! I am deeply impressed! I imagined my registration form would be buried in a pile of mail for at least a week or two before anyone bothered to read it. When I thought I’d still be living in North Carolina for the election, I was concerned my registration might get “lost” or “delayed” because the state government is kind of corrupt about that kind of thing. In reality, the hardest part of this whole process was locating the box my printer was in and setting it up so I could print the form in the first place.

I applaud you Marion County Board of Voter Registration. If I could vote for you, I would.

The only odd thing is that when I check my registration online, it still says I’m registered at the address I lived at six years ago instead of my new place. I guess the online database isn’t updated in real time. There is a voter ID law in Indiana, but it sounds like my passport qualifies as proper ID, so I’ll be able to vote even if I don’t have an Indiana driver’s license by then.

I hope all of you out there who are eligible will register to vote. The deadlines to register in most states are only a few weeks away. And if you’re wondering what lengths I will go to in order to vote, read my early voting blog post from 2008.

Later: The Big Move in Retrospect: Everything good and the bad about moving from Indianapolis to Chapel Hill
Earlier: Soon I’ll be back home again in Indiana
Home: Main blog index