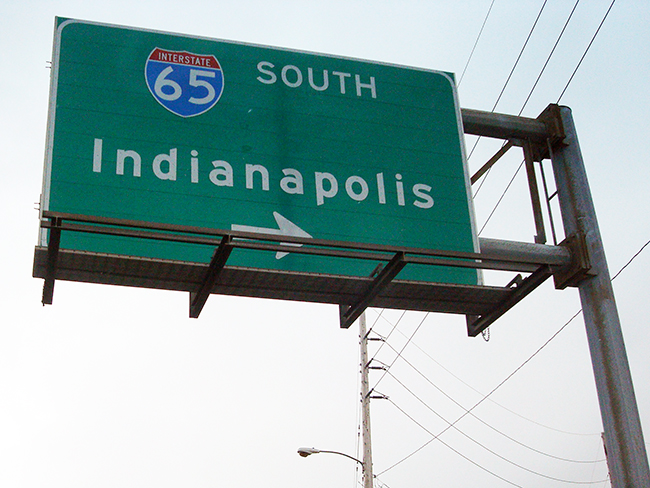 The short version: I was trying to move across town, but I’ve decided to move back to Indiana instead.

The long version: Last year my apartment complex introduced a mandatory amenity plan that costs $125 a month on top of my normal rent. The plan includes cable TV, cable internet, and valet trash, and although I enjoyed watching Game of Thrones live this year, I really don’t need cable TV and I can take out the trash myself. The only reason I went along with it this past year is because I wasn’t told it was mandatory until there were less than 60 days left on my lease, and I didn’t want to scramble to find a new place to live. And, ok, I kind of liked having an excuse to have cable, but when I realized I couldn’t cancel it at any time like a normal cable package, I became even more annoyed.

So, back in February I did some research, made some spreadsheets, and decided on another apartment complex with a nice one bedroom with a den. I got on the waiting list at the beginning of March for a move at the end of June when my lease was up. The day before I gave my 60-day notice, I called the new place to confirm everything was still on. They said they had six units up for renewal and usually only half were renewed, so everything would be fine.

Everything was not fine.

All six people renewed their leases, which evidently had never happened before, but who cares about that when you’re the one who gets screwed, particularly when you’ve done everything you could to be sure you wouldn’t get screwed? They offered me a smaller unit or a larger unit or a unit in their sister complex, but if I’d wanted any of those I would have applied for them in the first place. Instead, I went down to the leasing office of my current complex and started crying hysterically in front of the new property manager, Lynette, who I had just met 10 seconds earlier. This was five days after Officer Krupke died, so it didn’t take much to push me over the edge, but it was still rather embarrassing to be hyperventilating in front of a stranger while rambling about my recently deceased cat and the apartment complex that had just screwed me over.

Thankfully they had not yet rented my apartment, so Lynette let me go month-to-month on my lease, and perhaps even more importantly gave me a hug. I had to give them a move-out date though, so I chose the end of August, two months later. The people at the new place said, “we will definitely have a 1-bedroom/den by August, and will probably have several 1B1B units before then.” Later they let me know a couple was planning to move out of a one bedroom with den sometime in July or August. I figured I would know by the beginning of July if the unit would be free for my move-in date since the current renters would have to give 60-day notice. I also took their message to mean that if a 1-bedroom/den wasn’t available for that move-in date they’d have a one-bedroom apartment for me. Everything would be fine.

Everything was not fine.

I hadn’t heard from the new place by July 7, so I gave them a call and they still didn’t have a move-out date for the people in the unit I wanted. (I never did learn why they didn’t have to give 60 days notice.) I was disappointed, but I couldn’t wait any longer to book movers during the busy season, so I decided to go ahead with the smaller one-bedroom instead and asked if I could look at a unit before committing. This is when I found out that when they said “we will definitely have a 1-bedroom/den by August, and will probably have several 1B1B units before then” there was an unspoken clause implied at the end which went, “but we will rent those out to other people while you’re waiting on the 1-bedroom with a den and not tell you when they’re all gone.” So there were no one-bedrooms available. All they had was a two-bedroom in their sister complex which was too big and too expensive, or a one-bedroom in their sister complex which was so small that my L-shaped desk would have blocked a closet or corridor. Also, their sister complex let out onto a road where people travel 55 miles-per-hour and it did not have a traffic light. So, best case, I’d spend a lot of time getting in and out of the complex. Worst case, I’d die in a horrible wreck when I was headed to the grocery store for a late-night snack. In addition to that, it really annoyed me that someone was trying to pressure me to live somewhere I didn’t want to live. If I’d wanted to live at the sister complex I would have applied at the damn sister complex!

So, faced with the prospect that I literally had nowhere to live in two months, I once again started crying hysterically, this time on the phone with Karen from the new place. I was sitting at the picnic table outside my co-working space, and thankfully no one was around at that moment to witness my breakdown. I must not have been the first person to start hyperventilating while chatting with Karen either, because she acted like everything was perfectly normal and gave no indication that it sounded like I might pass out at any moment. I hung up and walked to my car where I sat for at least 10 minutes, trying to take slow deep breaths to regain control over my breathing.

That’s when I took out my phone and looked up my old apartment complex in Indianapolis, the one next to the trail that I loved so much. I saw that it would only cost $5 more a month to live there than it would have at the new place. I called them and asked when their next available move-in date was. They said they had something free on September 7th.

That’s when I decided to fuck all this shit and move back to Indianapolis, right there in the parking lot of my co-working space at 4:30pm on a Thursday.

It was all very sudden, but also very not. Typically, when I have a big decision to make I’ll think about it for a while, then I’ll mention it out loud to someone, which makes the idea more real. Then I’ll start to investigate and make actual plans, and then I’ll finally do what I’ve been thinking about. This is basically how I moved into freelancing, and this was how the idea of moving back to the Midwest had been progressing. I’d been thinking about it and this wasn’t the first time I’d looked up my old apartment complex online. I’d only mentioned the idea out loud to a friend less than a week earlier, and even then I was ambiguous about whether I wanted to do it or not. So, I was still a bit of a ways off from making a final decision.

This feeling that I might leave was one of the things that stopped me from seriously looking into buying a house in Chapel Hill instead of moving into another apartment complex. (The other was that real estate in Chapel Hill is really fucking expensive.) I figured I’d live in Chapel Hill for another year before probably leaving in the summer of 2017. But when I suddenly had nowhere to live, the timeline on this decision got moved up significantly and I decided to just make the leap. My mother was happy, to say the least. I called her an hour after my crying spell in my car, because I knew she’d be the most supportive of the decision and that once I told her I could not take it back without fear of crushing her heart.

I also took some joy in calling Karen from the new place the next day, who was probably expecting me to tell her I’d decided to live in the sister complex, and instead telling her I’d decided to….move to Indiana! Ha, ha! Take that! When people present you with options A and B, remember that there is almost always a secret option C. I know the people at the new place did their best to accommodate me, but I felt rather jerked around by them, so I took some joy in being the one to give them surprising news for a change.

This is the biggest decision I’ve ever made on an impulse, so the day afterwards I was anxious and kept asking myself, “Oh my God, did I make the right decision?!?!” Then I started to wonder things like, would my health insurance still work in Indiana? Can I transfer my LLC out of state? Will I have time to register to vote? The answer to all these questions seems to be yes, though I am a bit sad I won’t get to vote against the people I hate in the North Carolina legislature. When I told my brothers about the decision they were like, “Wait, what?” I pretty much shocked the hell out of all my family and friends. I figure this must be what it feels like to tell your family you just eloped. But as more days passed and I started to make plans, it felt like I had made the right decision.

Ironically, just a month earlier, a reader named Donna asked me how I felt about my move after several years and whether it had improved my life, because she was thinking of doing something similar. When I got the message I had not yet decided to leave the state, though the idea of doing so was lurking in the back of my mind. Her email shined a bit of light on it. I’ll answer Donna’s question in my next entry sometime this week which will be about all the good and bad things about the big move. If you’re looking for spoilers, the short version is that I’m glad I made this move and I’ve had lots of positive experiences here, but it also made me appreciate the benefits of living close to your family even if they live in a state that becomes a dark, frozen, wasteland in the winter. That said, I look forward to wearing my wide collection of winter hats in the near future!

Photo by bbmcshane / CC BY 2.0. The image was cropped and color adjusted.