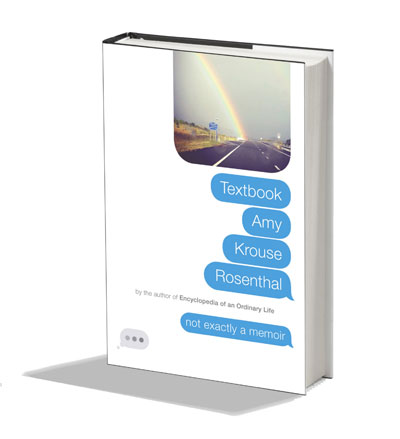 Disclosure: I received a free advance copy of this book to review.

The first thing I read by Amy Krouse Rosenthal was her column “15 Megabytes of Fame” hosted at a web site called “The Center for the Easily Amused” which is sadly no more, perhaps because the entire internet is now a place for people to be easily amused. This was in the late 90’s, when the world wide web was shiny and new and far less misogynistic. Amy’s column was hand-written with some doodles and illustrations and posted as a scanned image. The image was not actually 15 megabytes, thank goodness, because we were all on dial-up modems and 15 megabytes probably would have taken an hour to download. The title was a reference to Andy Warhol’s quote that in the future everyone would have 15 minutes of fame. It was quarky and funny and insightful and the handwritten text made it feel more personal, like a note from a friend.

Unfortunately, I can’t find an archive of her column, and the Internet Archive’s Wayback Machine doesn’t have a copy because the robots.txt file of the amused.com web site prevents indexing. The only column I could find was this guest post at ShinyGun.com. I have a couple of the columns saved on an old CD, but I don’t think I have any rights to post those, so they will stay on my shelf.

At one point, Amy wrote a column and mentioned a lame story that she was too embarrassed to tell, so I emailed her asking if she’d tell me the lame story and she did! Remember, this was early 1999, Napster hadn’t launched yet and I’d never heard of Google, so the fact that an author might respond directly to me via email was new and exciting. Amy seemed to enjoy interacting with her readers, like when I bought a copy of her book, The Book of Eleven: An Itemized Collection of Brain Lint, and was also sent some cool extras like Brain Lint notecards, a postcard, a picture of Amy and her friend Charise eating licorice under an umbrella, and a paper napkin that said, “Aren’t we all just trying to leave one good, lasting thing behind?” 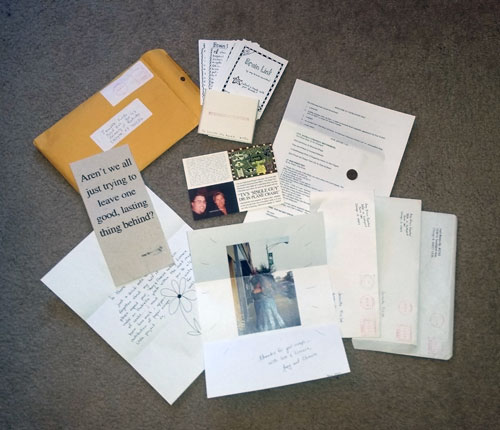 I also bought her second book, The Same Phrase Describes My Marriage and My Breasts: Before the Kids, They Used to Be Such a Cute Couple, even though college students probably weren’t the intended target audience. Then Amy started writing children’s books, and I was definitely not the target audience for those, so I admittedly lost track of her.

That is, until she wrote Encyclopedia of an Ordinary Life, an innovative memoir that uses an encyclopedia format to express her thoughts. It was rather delightful. I remember reading it in the waiting room of my headache clinic and really enjoying it, which was nice because when you’re driving four and a half hours each way for a doctor’s appointment about your headache that won’t go away, “enjoyment” is NOT something you expect on the menu for the day.

Which brings us to the present day in which Amy has a new book coming out, Texbook Amy Krouse Rosenthal, another memoir, this one styled like an academic textbook. I found out about the book on Amy’s Facebook page, which is where I also learned she was putting out a call for a group of 50 Awesome People to help promote the book who would get a free advance copy and access to an exclusive Facebook group. All you had to do was send an email including:

– Your name and where you live.
– Why you would like to do this, in 33 words or less.
– Something interesting that you noticed or that happened to you recently, in 50 words or less.
– OPTIONAL: Any of your social media profiles.

I’m not typically a competitive person, but I immediately thought, “I can totally nail this! I can be an official Awesome Person!” Not only that, I still had all that free stuff she’d sent me back in the 90’s. All I had to do was turn around, open a plastic tub on my bookshelf, and there it was, which was kind of freaky. I only have so many things on my shelves, so the fact that it was all within arm’s reach as I read the Facebook post was rather odd. I sent in my submission, which included a 50-word version of the mailman post I wrote a few months ago (because the rules didn’t say I couldn’t reappropriate earlier material in my submission), along with a photo of all the stuff, and thought, “She will either be flattered that I still have all this, or think I’m a crazy stalker. I STILL HAVE THAT NAPKIN YOU SENT ME IN THE 90’S!!!!!” I’m not sure which it was, but I was accepted into the group and was extremely happy to be in the cool kid’s club.

As an official Awesome Person, I am letting you know I highly recommend this book. Following the textbook format, there are chapters for Geography, Social Studies, History, Math, Art and more, and many of those titles have dual meanings implied. There are also prompts throughout that involve sending text messages to either vote on something or submit a photo that will go on the book’s website or just to get something sent back to you, like a link to a short story or music to listen to as you read the last chapter of the book. Also, as someone who sometimes flips ahead in books to see what’s going to happen (I read slowly and I get impatient), I liked that reading ahead didn’t spoil anything for me. Overall, this book is delightful, funny, reflective, and other good adjectives. If you enjoy my writing, I think you’ll enjoy Amy’s writing.

Oh, and there was this: 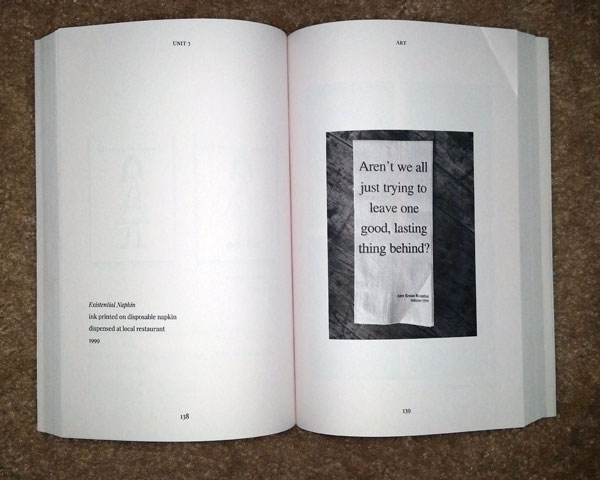 That’s right! The very same napkin I was sent years earlier is displayed in the Art section. I am in possession of an Amy Krouse Rosenthal original.

So, uh, that’s it. I enjoyed the book. I don’t think the fact that I got a free copy and was accepted into the Awesome People group has shaped my opinion in any way. I’ve clearly been a fan for years. I don’t think I had any aspirations to write a book when I first read her column. I didn’t have a blog yet either, and people who did at that time called them “online journals.” Still, it was nice to see someone with a similar humorous yet reflective writing style putting out books and grabbing their piece of the sky. I’m glad she’s still out there doing her thing. It’s so easy for life to drag you down with whatever damage you collect over the years. It’s definitely been harder for me to keep up with my writing because of my chronic pain, so it’s nice to get little droplets of inspiration from books like this from time to time.

You can pre-order a copy of the book here. If you live near Chicago, you can also attend the official book launch on August 9th at the Bean sculpture in Millennium Park. You can learn more in the video below. If you do show up, tell Amy that Jennette Fulda sent you so she knows I did not shirk my Awesome Person obligations!

She’s also got a YouTube page here that includes a lot of content, including the official book trailer. There’s also this video that shows lots of cool book-related decorations she has in her house:

I hope you get your hands on a copy of the book and enjoy it as much as I did!