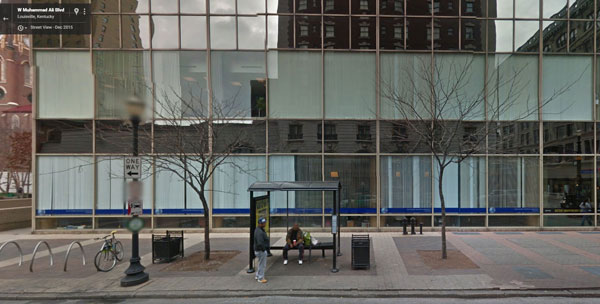 The first thing I think of when I hear the name “Muhammad Ali” is all the time I spent waiting for the 55 bus on Muhammad Ali Boulevard in Louisville, Kentucky. I was born in the 80’s so most of Ali’s major achievements happened before I was born. However, I spent a lot of time at that bus stop. At that point in my life, “Waiting for the Bus” by the Violent Femmes was basically my theme song.

I attended a high school downtown, but lived in the suburbs, so if I stayed after for an extra-curricular activity I had to ride the city bus home. I’d take either the 2nd street or 4th street bus to the transfer point where I’d pick up the 55 or sometimes the 49X Westport Express which was faster, but came less frequently. The 4th street bus came more frequently than the 2nd street bus, so sometimes it was also worth walking those extra two blocks to take it instead. And oh my God, why do I remember the intricacies of the Transit Authority of River City’s bus schedules 20 years later when I recently couldn’t remember my own grandfather’s name as the answer to a challenge question on a banking account?

The transfer stop was located on Muhammad Ali Boulevard in front of the Galleria, a shopping mall that was torn down years ago and replaced with a collection of bars and restaurants called Fourth Street Live! (Exclamation point is theirs, not mine, much like Yahoo!) There was a Wendy’s half a block down and across the street that was an endless temptation. Was it worth it to run down the street for a Frosty when you might risk missing the bus and having to wait another 30-60 minutes for the next one? One time some friends of mine went to the Wendy’s and asked me to hold the bus if it came before they got back. I was not the person they should have asked to do this! I was far too timid and shy to get the driver to wait for a pack of teenagers and boy were they pissed at me the next day. According to Google Maps, the Wendy’s is gone along with the Galleria, so it seems like the only thing left is the bus stop itself.

Since Muhammad Ali died last week I’ve learned a few things about him I didn’t know before, like how he was a conscientious objector to the Vietnam War and was banned from boxing for several years because of it. I also didn’t realize how many zinger couplets he could recite. He seemed like a guy who stood up for the things he believed in, which is rare. Sometimes people will say they believe in something, but won’t take the actions to prove it when pressed. Muhammad Ali seemed like someone who walked the walk as well as talked the talk.

But I’ll still think of that bus stop first whenever I hear his name.

Maybe that’s the power in naming a street after someone; it makes their name enter your personal lexicon and tag itself to memories and experiences it wouldn’t have otherwise. I couldn’t tell you who Henry Watterson or Gene Snyder were without looking them up on Wikipedia, but I know the Watterson Expressway was a mess of construction in the 90’s that was best avoided and that if something was out past the Gene Snyder Freeway it was way, way out there. (Wikipedia says Henry Watterson was an editor of the city’s paper and Gene Snyder was a Congressman who got the funding approved for the freeway named after him.)

I would know who Muhammad Ali was whether a street was named after him or not, but naming that street after him has associated him with my personal memories in a way he wouldn’t have been otherwise. If anyone’s name was going to be tagged onto my high school memories, Muhammad Ali seems like a great choice. Probably the greatest.