Last month I decided it was time to retire my Lenovo laptop after almost five years of dutiful service. It hadn’t had a complete nervous breakdown yet, but it was getting more and more neurotic in its old age. For instance, when I put the lid down for more than 15 minutes and then opened it again, I would sometimes see only a black screen with the mouse cursor and no safe way to restart the computer. Even if I pressed CTR+ALT+Delete and tried shutting down from that screen, it wouldn’t work. Which meant I had to push the power button until it forced a hard restart and then later run CheckDisk overnight to fix any disk errors that caused. I shuttle my computer back and forth from a co-working space, so being able to shut the computer without shutting it down is important to me.

The computer also had a history of running hot. Really hot. So hot that occasionally the kill switch would kick in and my laptop would suddenly, instantly shut down to prevent the CPU from literally melting. And lately when I plugged in items to the USB ports, it could take 1 or 2 minutes before the computer figured out anything was there. I’d learned to work around all these quarks, but when I finally did get my new laptop, I was like, “Why did I put up with all that shit for so long?” It was like getting out of a bad relationship. Unfortunately, the path to getting that new computer was arduous and kind of awful as far as technology purchases go. (It wasn’t that awful on the grand scale of awful things, like getting shot at the office Christmas party or thinking about how many people agree with the bigoted things Donald Trump says.)

First, I tried to buy a computer directly from the official Hewlett Packard store. Word of advice, DO NOT BUY ANYTHING FROM THE OFFICIAL HP STORE!!! I had the worst online shopping experience of my life there, and that includes the two times my credit card number has been stolen. I was able to place my order without problem, but two days later I got an email saying they were sorry that I’d cancelled my order, only I hadn’t cancelled my order. So I was like, “Did someone hack my account and cancel my order? Who would care enough to do that?” I tried the online chat support, but it was busy, so I called the help line and had to talk to someone on the phone (which is pretty horrible in itself) and they said their system was down and they couldn’t give my any info, so I should call back tomorrow. I then tried filing an email ticket and got a reply the next day saying that my order appeared to be both cancelled and not cancelled and they didn’t have a flipping clue why that was, so I should try calling support again. I did that and got some poor kid who was clearly on his first week of training who forwarded me to someone else saying the order was definitely still in place.

The next day I got two more emails saying the order had been cancelled. I filed another email ticket and they said they couldn’t talk about it for security reasons unless I called and verified my identity, at which point I decided I was done and ordered a different computer from New Egg the next day.

Want to guess what happened next? Two days later I got a call from HP asking me to please confirm the details of my credit card so they could finish processing my order. I KNOW!! What kind of crazy retail circus are they running over there? Do they have actual monkeys on the assembly line? I told the rep that I did not want a computer from them, thank you very much, please stop calling me, good-bye.

The other interesting part of this experience was the fact that whenever I tried to start an online chat with HP support, I was told the service was too busy. Which leads me to believe they might not have a chat service at all, and it’s just a ruse so people won’t ask them to start a chat support service. If you don’t believe me, go to their support page between 8:00am- 2:00am ET and try starting a chat with them. Ask them if they sell directly to Santa Claus or something. If you manage to get a real person, post a screenshot in the comments. I had a friend who encountered something similar at a bagel store she used to work at in high school. The store had trash and recycling bins for customers, but every night they would just dump the recycling out with the normal trash. They only added the recycling bin so customers wouldn’t nag them about it. 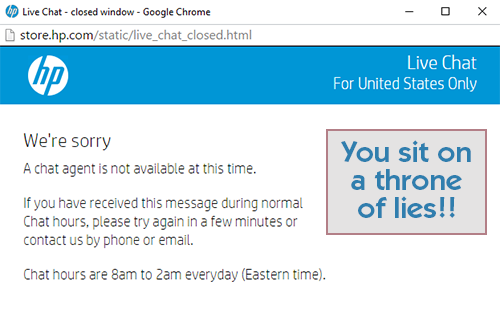 ANYWAY, after that madness was over, I eagerly received a shiny, new, golden MSI computer from NewEgg, only it was not all I dreamed it would be. Bright yellows rendered in a mustard color, which is kind of a big deal for a web designer. Also, the 3840×2160 resolution was way too much for me and didn’t play nice with my 1680×1050 desktop monitor, which may be old but still works perfectly fine. It was heartbreaking, but I had to return it. I also had to figure out how to delete the files I’d downloaded so they were irretrievable and to reset the laptop to its factory settings. I still miss the beautiful backlit keyboard and its rainbow of blue, purple and red lights. *sniffle* Big props to New Egg though because they refunded me all my money except for a $174 restocking fee, and I didn’t even have to pay for the return shipping. I was expecting to eat 25% of the computer’s price as is listed in their return policy, but they refunded it all.

So finally after all that I bought an Acer from New Egg that was actually one of the first computers I’d considered but had been too snobby to buy because I associate that brand with cheap netbooks, not quality laptops. It has been awesome so far. I also noticed that Jessica Jones on the Netflix show Jessica Jones has an Acer, which is surely a product placement, but she’s cool, so I found it strangely reassuring she was using one, even if she also has a broken office window and holes in her walls and a cockroach in her bathroom sink.

The laptop boots in 1-2 minutes because it has a solid state drive, which still awes me. Programs that took forever and a day to load on the Lenovo, such as Spotify, now open up in 5-10 seconds. I don’t have to wait ages for Firefox or Chrome to open. They just open. Which made me realize, oh, maybe the problem wasn’t with Spotify, it was with my computer. I’m also in love with the USB 3.0 ports that can transfer data to my external hard drives six times faster than the old computer could. Backups are soooo much faster now.

The only small annoyance is that there is one pixel near the middle of the screen that is brighter than the others, though you only notice it on bright colors, like say the white background of most web pages when I’m reading. When I first noticed it I thought about exchanging the computer for another of the same model, but quickly said, “Hell, no!” With my track record, I’d probably get a laptop with 5 dead pixels as the replacement.

As a result, I’ve also upgraded some software that I was using old versions of, like Microsoft Office 2007 and Adobe Creative Suite. I’m still not used to some of the changes, like the smooth animation of the cursor as I type this in Word, or the way the highlighted cell border animates when I’m switching cells in Excel. I also have to figure out how to turn off smart quotes and other nitpicky settings like that. I’m also kind of annoyed that I have to switch to a subscription service for my Adobe products, which means they’ll eventually wring more money out of me than they would have before. But I guess all that comes with the territory. At least it’s classified as a business expense.

Hopefully this Acer will last another five years, though who knows what the Internet will look like then or how much RAM programs will need to run or who will be president. I’ll keep my fingers cross for the best in all regards.