For several days this month there was a refrigerator lurking in the outside hallway. 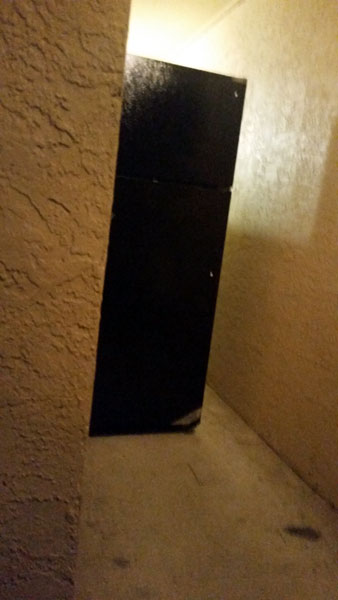 The way it slowly came into view as I walked up the stairs made me feel like it was stalking me, as if it were slowly peeking around the corner to get a glimpse of its prey. I was somewhat concerned it would try to creep up on me if I turned my back, like the Weeping Angels from Doctor Who. This was of concern because a Punky Brewster episode in the 80’s taught me that refrigerators can kill if you get trapped inside one. Actually, I don’t think you can get trapped inside a modern fridge, just the old ones with locking handles. Still, it was one of the more memorable episodes of Punky Brewster, right up there with the one dealing with the Challenger explosion and that time Punky got trapped in a cave with ghosts.

As I’ve mentioned before, they’ve been remodeling apartments in my building. The old appliances are being replaced with new black ones, so I think this fridge ended up in the hallway while they were shuffling other stuff around or making repairs. I guess we live in a fairly trusting community for them to leave several hundred dollars worth of kitchen appliances out in the open for several days. My old neighbors left an IKEA bookcase outside for 3 days before I declared it abandoned and snatched it up for myself. Granted, a refrigerator would be a lot more difficult to move, and I don’t know what price it would fetch on the black market (a.k.a. Craig’s List).

The fridge vanished after a few days, and I have to say I’m glad it did. I don’t need creepy kitchen appliances lurking in the hallway, thank you very much.

Later: Road rage: That time I was chased around the mall parking lot
Earlier: Talking while I sleep
Home: Main blog index