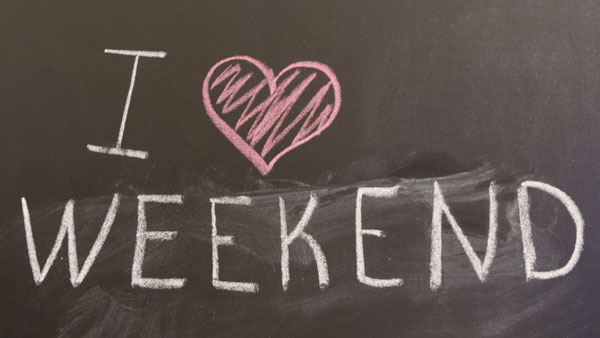 I promise I’m not a workaholic. I’m a freelancer, so I set my own hours. If I work on the weekend I usually take a day or two off in the middle of the week to make up for it. I rarely ever work 7 days straight unless I’ve scheduled things poorly, and most of the time my chronic headache makes it impossible to work that long of streak anyway. There have been days when I’ve sat down in front of the computer and tried to get work done, but my brain is like, “Sorry, we’re not open for business today.” And that’s just that.

The best thing about working on the weekend is that no one else is working on the weekend, which means no one is emailing you, which means no one is adding items to your to-do list faster than you can cross them off. I actually feel like I get ahead when I work on the weekend, whereas during the week I feel like I at best break even, or more often than not fall behind. I dream of a day when my to-do list and my inbox are both empty, but that day will never come, which is probably a good thing because that would mean I’d be out of work and out of money soon after. However, if that to-do list gets too long I get stressed out and anxious, so it feels good to take a big bite out of it all at once.

It’s like that bit at the end of Bill and Ted’s Bogus Journey when Bill and Ted are about to play a big concert and realize they don’t know how to play guitar that well. So they take their time machine, travel to the past, spend 16 months in intensive guitar camp, and come back to play the gig. This is how I feel when I work on the weekend. I feel like I’m accessing extra time to get ahead.

The other great thing is that I can sit down and work on something for several hours straight, which rarely ever happens during the week. I know some people can get away with checking email once every few hours, but as a web developer, that’s not a great idea for me. You never know when something disastrous will happen to a client’s web site. If the server goes down or the site gets hacked or something isn’t working the way it should, I need to know about it right away. The result is that I tend to get distracted several times per hour with different requests or problems or security notifications and crap like that. So it’s hard to sit with a project and focus on just that for hours at a time, even though that’s when I’m most satisfied with my work. I don’t like handling 10 different small tasks in a day. I’d rather handle one long task, as long as it’s interesting. As a result, I’ve developed a fondness for working on the weekend or just in the evenings, when everyone else it mostly done for the day.

The only problem with this approach is that I end up staying up late and sleeping late, so if someone has an emergency at 8am in the morning they are shit out of luck unless they have my cell phone number. Which some of my clients do, and there has been more than one occasion where I’ve gotten a call from someone asking if I’d gotten their email about a horrible thing that is happening and I’ve had to say, “Sorry, no, I was asleep.” However, if you have a crisis at one o’clock in the morning, I will probably be available to handle it.

If I worked a regular 5-days-a-week, 8-hours-a-day type of job, I would be strongly against working on the weekend. I believe you need time off during the week to recharge, for your own happiness, and also because it helps prevent you from burning out. But since I can set my own hours, that time off can happen when I want it too. For instance, I worked on Sunday and Monday of this Labor Day weekend, but that’s partly because I plan on taking a three-day weekend of my own later on this year. I just won’t have to deal with all that Labor Day traffic. Nyah, nyah! Everyone else has to take their three-day weekend during that set government holiday, but not me.

It is important to maintain boundaries though, and you run a risk of letting work like bleed into real life when you work on the weekends. I try to be mindful of that and let myself take time off during the week without feeling guilty about it. I also don’t have a husband or kids who have their own schedules I’d have to sync my own life with, so there’s more flexibility. I don’t have to take anyone to soccer practice on Saturdays. As my work life stands now, working on the weekend isn’t necessarily a bad thing, and I’m ok with that. It can make it trickier to schedule social events, but you can usually work around that. It’s a matter of juggling things properly, and while there have been times I’ve dropped a ball or two, I think I otherwise juggle things ok, in a solely metaphorical sense, because juggling actual objects is much, much harder.

Later: Things to do near Cumberland, Maryland?
Earlier: Not a picture I’ll be bragging about
Home: Main blog index