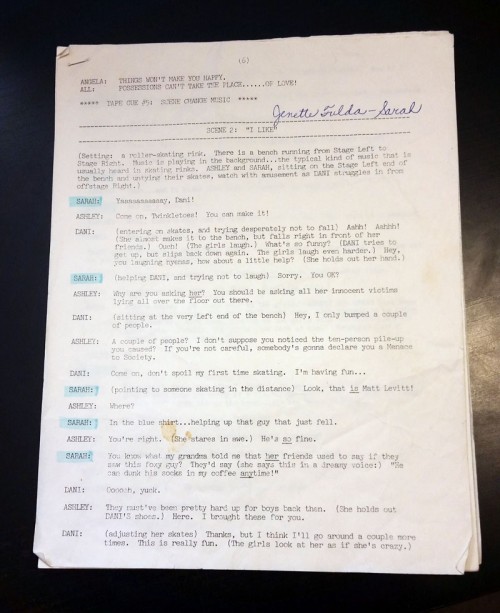 In fourth grade my school put on a musical called “Feelin’ Good,” the existence of which I can find no trace of on Google, so I’m not sure who wrote it or how they acquired it. For all I know, a frustrated music teacher banged out the script in her spare time, dreaming of the life she could have had on Broadway.

I somehow managed to get cast in a speaking part in “Scene 2: I Like” as Sarah, one of two sidekicks to Dani, who got the most speaking lines. (Not that I counted. Of course not.) As written, the scene takes place in a roller-skating rink, but was then changed to roller-skating in a park, and then changed again to skateboarding in a park. This was because we were all less likely to accidentally skate off the stage and die on skateboards than on roller skates, and because creating stage scenery for a park was evidently easier than buying a disco ball and laser lights.

In the scene, Dani and her two girlfriends, Sarah and Ashley, meet and flirt with Theo and his two guy friends. Then Dani and Theo sing a song about the stuff they like, including each other, which comes off as a poor man’s version of “My Favorite Things” from The Sound of Music. However, I do admire Theo’s confidence in his own masculinity when he admits he likes baby tigers at the zoo.

The thing I remember most from this play is one particular line I had:

Sarah: You know what my grandma told me that her friends used to say if they saw this foxy guy? They’d say (she says this in a dreamy voice:) “He can dunk his socks in my coffee anytime!”

This line got a big laugh, but it always confused the hell out of me. Even my fourth grade self could tell it was something sexual and flirtatious, but the metaphor made no sense. I assumed it was something I would figure out once I got older, but here I am twenty-something years later and I still have no effing clue where this figure of speech came from. If it were, “He can dunk his donuts in my coffee anytime,” it would make some sense because donuts and coffee are frequently sold and consumed together. But socks? In coffee? I’m sorry, but this is crazy talk.

I tried Googling the phrase and I only found two results here and here, both of which are from people repeating something their grandmother or great-grandmother used to say. My best guess is that this was a colloquialism used in the early 1900’s that has since been lost, and makes me further wonder, who the hell wrote this musical?!

When re-reading the script, I also noticed something a bit odd. During a conversation amongst the whole cast, a recent track meet comes up and Sarah (that’s me) starts bragging about her friend Ashley.

Sarah: Well, if you saw the Girls’ Hundred Meters and the Two-Hundred Meters, you would’ve seen her, ’cause she won them both.

Sarah: (pulling out a folded-up newspaper article) Yeah. She even got her picture in the paper, crossing the finish line.

This begs the question, why was Sarah carrying around a newspaper article with Ashley’s picture on it? It’s so obvious now. Sarah has a secret lesbian crush on Ashley! She is on the track team after all. This explains the line about dunking socks in coffee. Sarah is overcompensating, repeating something her great-grandmother said about boys, to hide her affections for her best friend! The subtext is so clear to me now. It’s a shame I missed it entirely when I was in the fourth grade. It’s probably for the best because I don’t think that would have played well in a small Indiana town in 1990.

This production marked my last foray onto the stage. Previously I played a pilgrim in our second grade Thanksgiving production, and before that I was the letter “K” in an alphabet-themed Christmas sketch in kindergarten. I can still remember my line:

K is for kaleidoscopes
and kitchens filled with sweets and spices

Even at that age I was annoyed by how the second line failed to maintain the iambic tetrameter of the first line. Shakespeare would have been ashamed. It would have been an easy fix too. Just singularize “spices” to make it: “kitchens filled with sweets and spice.” And what do kaleidoscopes have to do with Christmas anyway? Wouldn’t “Kris Kringle” be the better choice for the letter K? That might have been too heretical for a Catholic school production.

My life since them has involved very few pilgrims, no one has ever asked me what “K” stood for in relation to Christmas-time paraphernalia, and I have never told anyone they could dunk their socks in my coffee. That is what biscotti is for.

Later: Sorry, your Christmas card is now evidence in a postal theft investigation
Earlier: How hard is it to do your job? Evidently, pretty hard.
Home: Main blog index