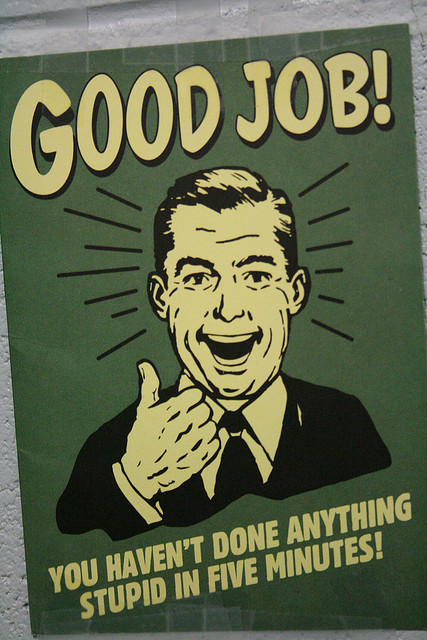 Lately I’ve been spending a lot of my time asking people to do their jobs correctly or straight up doing their jobs for them. First, there was the mailman who decided he’d rather leave a note in my mailbox saying my package was at the office instead of, you know, actually delivering it to me. I was home all day when this happened, so I know for a fact he didn’t try knocking on my door. Normally I wouldn’t be too pissed about this, but it was a package from Amazon and I pay them $99 a year for Prime which entitles me to two-day delivery, not two days plus one night in the office and a jaunty walk to pick it up. They’re supposed to use UPS for shipping, but UPS sometimes gets the US Postal Service to deliver their packages. Weird, I know, and far less efficient. The UPS man has always knocked on my door. The mailman pulled this same shit before Christmas too, the day before I left for the holidays, so I didn’t end up getting that package until a week later. The window in my home office looks directly at the mailbox gazebo, so every time I see my mailman’s little mail truck outside I give him the evil eye, but I don’t think he’s noticed.

Then there was the podiatrist’s office that charged me $75 for a co-pay in January after I’d injured my foot. I swore my co-pay should have been $50, so I checked my health insurance claims info a month later and I was right, they’d overcharged me by $25. I waited a few months for a refund to come, but it didn’t. So I had to write a letter explaining their error, which was followed by a call from their office asking for a copy of my health insurance card, which was followed by me mailing that copy to their office, and finally ended with me getting my check the next month. Lesson of this story: Don’t try overcharging a chronically ill person. We know to check our billing statements.

And you shouldn’t get me started on the ongoing billing error saga that I had last year with my primary physician. I got billed for a whooping cough vaccination literally a year after I had the vaccination, which was weird in itself. I paid my bill promptly and had the cancelled check to prove it, yet the bill was not marked as paid in the system and they kept threatening to take me to collections about it. (If I’d been taken to debtor’s prison at least I knew I wouldn’t catch whooping cough there.) It took a phone call, a trip down to the doctor’s office, a letter, another phone call and another letter to sort the whole thing out. I hope someone there is embezzling, because that’s the only reasonable explanation I can think of for why the billing got so screwed up. I temped at a bank one summer and those ladies were hardcore about balancing at the end of the day. If your balance was off, you had to go through all your transactions for the day and figure out where you’d screwed up.

As frustrating as these incidents have been, it makes me really appreciate the times someone does their job well, like the cashier at Joann’s who walked me through how to sign up for their text alerts and get a 20% off coupon on my phone when the coupon I brought turned out to have expired. Or the lady who worked at the post office I used in Indianapolis who was always happy and energetic and moved people through her line quickly. The fact that I still remember her years later shows how exceptional I thought she was.

It’s also made me look at myself and realize I don’t always put 100% into my job. There are some emails I never got around to answering. There have been plenty of times when I’ve pushed a deadline back. And then back again. Which must be frustrating to my clients. When I eventually do get the work done, I think I do it well. But scheduling and project management are skills I’m still working on perfecting, and that probably shows at times. So, I apologize if there have been times I have not done my job well. I know how annoying that is!

Later: He can dunk his socks in my coffee anytime
Earlier: Two weeks of Blue Apron: Six recipes, one blogger, and not enough bowls.
Home: Main blog index