It’s rather bizarre to see the location of your latest tourist jaunt turn into the location of the latest mass shooting. One moment I’ll be watching a news broadcast, feeling bad for the victims and their families, and then I’ll suddenly realize, “I know exactly where that pink house is.” 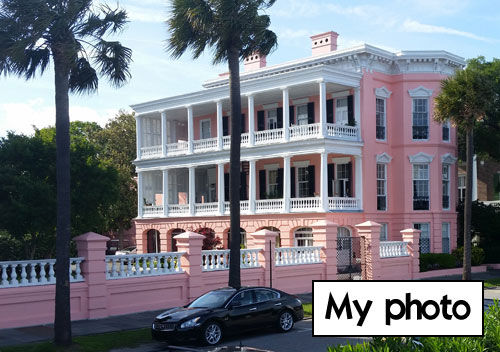 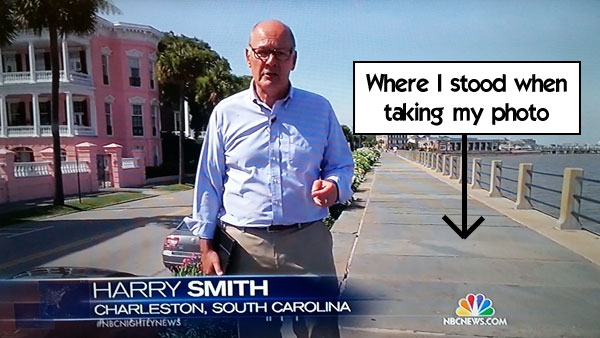 Knowing exactly where a pink house is somehow makes a tragedy like this seem even more real. I was there. It exists. This is the real world. I couldn’t recall if I’d seen the church where the shooting occurred during my trip, so I looked it up on Google Maps and was surprised to learn it’s only 3-4 blocks away from the Visitor Center. I then consulted Big Brother (aka Google Maps Location History for Android users) and learned my tour bus had driven past that church at the beginning of the tour at approximately 4:40pm on May 6th. 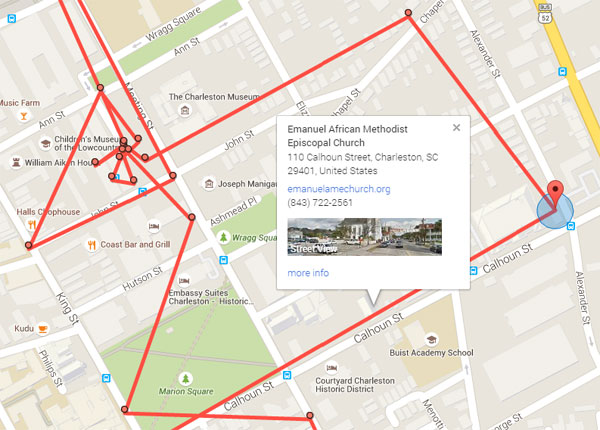 Even though it feels bizarre, it’s not really bizarre, is it? If you live in America, you live with the knowledge that you could be shot dead by a lunatic at any moment and there’s not much you can do about it. The probability of it happening to myself or people I know is rather low, which is why I continue to live in this country, just like I continue to drive a car even though there is a chance I could die in a fatal car wreck any time I leave the parking lot. That said, probability has been brushing past me a tad closely lately. Just a few months ago three Muslim students were killed a few miles away from me here in Chapel Hill. The story went international. There’s even a Wikipedia entry about it. Between that and the Charleston shooting, it’s a reminder that America can be pretty horrible sometimes, particularly if your race or religion makes you a target of hate groups. It also reminds me that we’re probably not going to do anything about it.

I was in Washington DC two years ago working with the Headache on the Hill campaign on the same day that the parents of the children killed in the Sandy Hook massacre were there lobbying for gun laws. I remember sitting in the waiting room of my senator’s office listening to an aid take one of many phone calls that day about gun control, patiently explaining to a constituent that “criminals don’t obey the law.” I actually felt a bit bad for this government wonk and all the angry people she had to converse with that day, even though she probably would have loved to take away my health insurance. The office of my other senator from a different political party was also fielding lots of calls, so it seemed like a gun control law might actually get passed.

And then it didn’t.

If the parents of slaughtered six-year-olds can’t get gun legislation passed, I don’t think it’s going to happen. Things are probably just going to stay the way they are. Every few months some perfectly nice people will get shot, we’ll watch news stories about it and be very sad, and then we’ll just keep on keeping on. I know that’s rather pessimistic of me, but when you’re a pessimist you’re always either right or pleasantly surprised. Let’s hope I’m eventually pleasantly surprised on this one.

Later: Bad, back! Bad!
Earlier: Who did it better?
Home: Main blog index