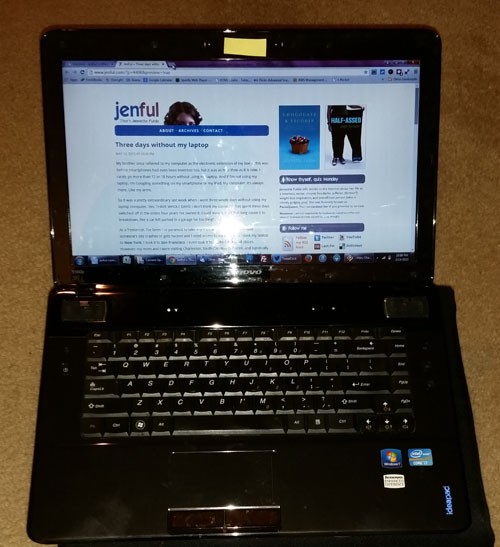 My brother once referred to my computer as the electronic extension of my body. This was before smartphones had even been invented too, but it was as true then as it is now. I rarely go more than 12 or 18 hours without using my laptop. And if I’m not using my laptop, I’m Googling something on my smartphone or my iPad. My computer. It’s always there. Like my arms.

So it was a pretty extraordinary when I went three whole days without using my laptop computer last week. Yes, THREE WHOLE DAYS! I don’t think my computer has spent three days switched off in the entire four years I’ve owned it. Could leaving it off that long cause it to breakdown, like a car left parked in a garage for too long?

As a freelancer, I’ve been too paranoid to take any trips without my laptop in case someone’s site crashes or gets hacked and I need access to my work files. I took my laptop to New York. I took it to San Francisco. I even took it to Punta Cana of all places. But when my mom and I were visiting Charleston, South Carolina last week, logistically it made more sense to go downtown for a bus tour first and then check-in at the hotel afterwards. I didn’t want to leave my laptop in the trunk of a car in 80-something degree weather for several hours, so I thought, eff it, I am going to leave the state without my laptop computer!! Oh, yes I am!!

This is what passes for crazy, living-on-the-edge, behavior in my life. However, I was not going off the grid completely. I set my work email to forward all messages to my Gmail, which I could access on my smartphone. All in all, it went rather well. There was a WordPress security update released, but my sites were set to auto-update, so no worries there. No one’s web server was confiscated by the FBI and no one got hacked. All I really had to do was reply to a few people to tell them I’d get back to them later.

The only slightly disturbing moment was when Google sent me an email saying my tax information had been updated on my Adsense account even though I had not updated my tax information on my Adsense account. The only thing that prevented me from having a panic attack was that I was reading the email from my Gmail account, so even if I had been hacked my password obviously hadn’t been changed. Also, back in March two of my clients had gotten emails from Google about an Adsense policy breach that turned out to be a bullshit mistake, so I figured this was another SNAFU on their part. Some Googling confirmed I wasn’t the only person to get this bogus tax email, so no worrying was done on my part. Four days later Google sent out an email apologizing, which is like a year in Internet time. Google, you are really losing your magic mojo.

It was nice to step away from my work for awhile. It’s hard to get “real” time off when you work for yourself. Even when you’re away, you’re not totally away. But I somehow managed to take a whole week off this month for the first time in forever, and it was great.