I don’t remember exactly why I opened a Sharebuilder account, but I know it involved free money. I think they offered to give me $50 if I opened an account, so I did. I’d never played the stock market before, unless you count opening an Individual Retirement Account (IRA), but that money is invested in an index fund so I’m not actively doing anything other than depositing money into it every month.

I learned about the stock market and bonds and IRAs and other financial voodoo like that in my early twenties after I graduated college with some credit card debt. And then my transmission broke. And then I had gallbladder surgery. So I was in debt for many, many years, signing up for new credit cards just so I could get nine months of no interest with my balance transfer, and slowly paying my debt down. That slow, suffocating horror made me decide I would like very much never to be in debt again. I did some reading and felt educated enough to handle my savings and my IRA, but I never dallied with day-trading or purchasing a specific stock by itself.

However, now that I had this free $50 I decided, what the heck, let’s play the stock market! It’d didn’t feel like real money, more like I was playing “Monopoly.” If I lost it all, well, I hadn’t really earned it in the first place. And if I made some money, wouldn’t that be fun? 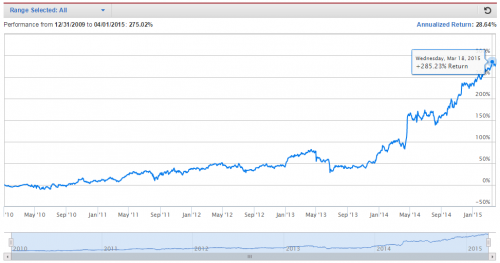 Remember that $50 I started out with? Over the past five years it has almost QUADRUPLED!! It topped out at $192 a few weeks ago. I am so good at playing the stock market! My only regret is that I did not dump my entire savings and IRA into this thing. What super-rocket stock did I buy, you might be asking? I bought Allergan. What the hell is that, you might be asking? They’re the manufacturers of Botox.

One of the most common pieces of advice given to writers is, “Write what you know.” Similarly, when playing the stock market you should buy what you know. I might not now how to properly pronounce “Allergan,” but I did know they were going to get FDA approval for Botox as a migraine treatment not too long after I made my purchase. Yes, my chronic headache might give me 99 problems, but bad stock tips ain’t one. The stock did go up as I predicted. And it continued to go up, and up again, and up again.

More recently a company call Actavis acquired Allergan, which drove the stock up to that peak point I have highlighted in my chart. I don’t know much about Actavis, and I don’t really care enough to educate myself about Actavis, not that they haven’t tried: 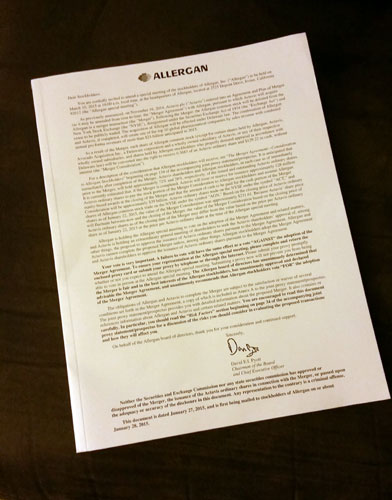 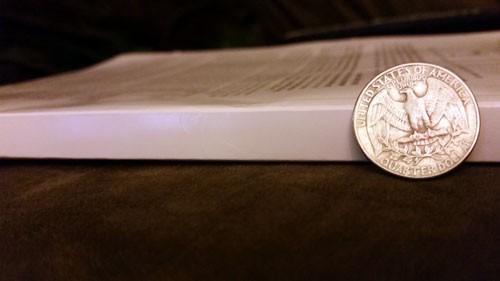 One of the strange side effects of owning a stock is that you are occasionally sent big, fat, reports about the stock’s possible merger with another company. These days the phone book isn’t even as thick as this thing. I feel bad for whoever has to assemble this report. I have to wonder if they hid total nonsense passages in the middle as a test to see if anyone bothered reading it. I didn’t. I tossed it directly into the recycling bin.

Anyway, I can’t decide if I should sell my stock now and get out, or stay with it and see where this roller coaster ride ends. Is this the peak? Or will it continue going up? Past results do not guarantee future performance! I was tempted to get out when it hit $100, but I didn’t want to bother figuring out how capital gains taxes were going to complicate my tax return. And like I said, it still feels Monopoly money to me. Only, I’ve never been as good at playing Monopoly as I am at playing the stock market.