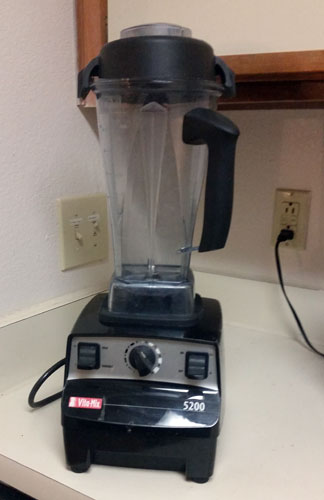 A while back, a PR person for Vita-Mix sent me a free Vita-Mix Super 5200 blender in exchange for a review. That was December 2008, over six years ago, so I thought maybe I should get around to doing that review already. Yes, that’s right, a PR company sent me a blender that costs (holy shit, I just looked this up), $449 dollars, and NEVER followed up with me about a review. Who is running that place? They should be fired! Maybe they were! Maybe that’s why they never followed up!

I had originally intended to make a video to review the blender. My friend K was trying to decide between a Vita-Mix and some other model at the time, so I brought it over to her house and we blended a lot of stuff and it was quite fun. This machine is a monster! It can blend anything that is blendable, and some things that aren’t. However, I had never done a video review before and when I reviewed the footage a lot of it wasn’t lit well and editing the whole thing together was going to take a lot of time, so I never bothered to finish it. I’ve occasionally wondered if K thought I’d made up some weird story about a blender review as a way to get invited to her house or something.

I’ve had this blender for six years and every now and then I’ve thought to myself, “You should really review that Vita-Mix. You’ve gotten as close to stealing that blender as you can without technically committing theft.” So, now is the time. Now is the day I finally review the Vita-Mix!

Let me put this simply: this blender is totally awesome. It’s the greatest blender I’ve ever used. I swear I am not biased by the fact that I got it for free, because obviously I could have kept my mouth shut for another six years and no one was going to give a damn.

You do need to know a bit about blending to make it work best. When I was at K’s we threw a lot of solids in without much liquids, which made us think it wasn’t working that well. Oh, how foolish I was in my late twenties! You need to put the liquids in first and the solids on top of that so the blades are able to spin more freely and chop better. Once you figure that out, you can blend ice and frozen vegetables without a problem. 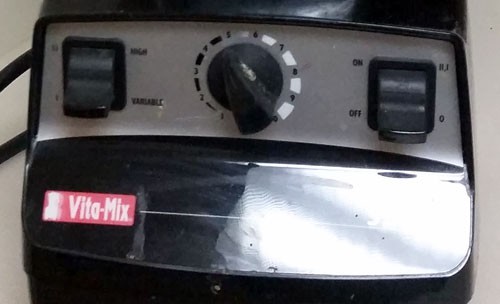 There are two settings: variable speed and high speed. When you’re using variable speed you can use a knob in the middle to adjust how fast it’s blending. I start out at the low setting when I’m making a smoothie and then slowly ratchet it up. Once the ice has been broken up a bit I flip it into high speed mode.

So there you go. The Vita-Mix is awesome. If you have a few hundred bucks to drop on a blender, you will not be disappointed. Or you can start writing a weight-loss blog in the hopes of luring another PR rep into sending you one for free. I’m not sure that’s going to work twice though. I’m surprised it worked once.

Later: Playing the stock market
Earlier: If you could get by with 3 hours of sleep a night would you want to?
Home: Main blog index