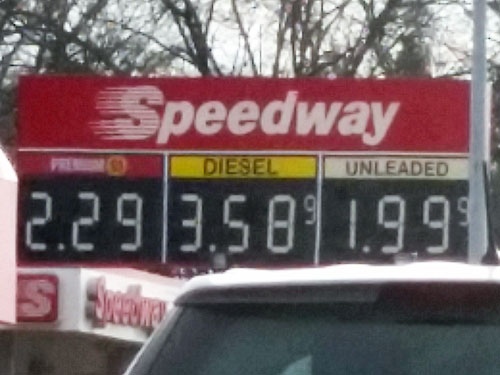 It was probably a bit crazy to drive from North Carolina to Indiana by myself in a day, but I managed to make it both ways with only one of my toes going slightly numb. Normally I fly back home for the holidays, but I decided to drive this last year for several reasons:

2) When I looked at the number of rewards I’d earned at The Fast Park over the past few years, I realized my car has spent over two months parked at the airport. I thought parking it in Indiana would be a nice change. But isn’t it weird to think I’ve spent two months of rent on an empty apartment?

3) Gas prices were so cheap that I was able to make the round trip for only $79.87. Why yes, I do keep meticulously obsessive records. Want to see my spreadsheet?

5) No TSA! I was able to bring an entire bottle of shampoo with me. It was awesome.

6) This is a rather weird reason, I will admit. I’ve been watching the reality show Pitbulls and Parolees lately and it’s fairly common for the people who work at the pitbull shelter to drive long distances to deliver a dog to its forever home. I couldn’t help thinking, if they can drive from New Orleans to Tampa with a dog in the van, surely I can make it to Indiana on my own.

I was on the road for Indiana at 7:55am, just after sunrise. On my way to the Hoosier state I saw seven cops making traffic stops, various roadkill that I could not identify, and two dead deer on the side of the road. I also saw at least six roadside memorials for people who’d died in traffic accidents, which is a rather disturbing thing to see over and over, particularly when you’re already nervous about driving through the mountains. Those signs that say “Fallen Rock” and “Accident Investigation Site” aren’t very reassuring either. Driving is more dangerous than flying, and I kept being reminded of that as I made my way west, though it was rather interesting to watch the elevation level on my GPS as I made my way through the Appalachians. It started at about 1300ft and then went all the way up to 2800ft and then down again.

I took a break every 3 hours so I could eat or pee or stretch or let my right foot regain feeling in the heel. I don’t have cruise control, so I had to manually operate the pedals for the whole trip. I alternated between listening to music and podcasts because after an hour or two of music you wish for talking, and after an hour or two of talking you wish for music. I had lots of old RadioLab podcasts loaded on my MP3 player to keep me entertained. Once I hit the halfway point of the drive I felt more confident that I’d be able to make it the rest of the way. I just had to do what I’d just done one more time, right?

I always get a bit nervous when I hit a stretch of the drive where there don’t seem to be any gas stations or restaurants for 20 miles or more. It’s easy to forget that humans don’t occupy 100% of the world’s land. But it’s also nerve-racking to know that if the car breaks down or you have a medical emergency you are way far away from immediate help, and possibly out of range of a cell tower. I suppose a fellow motorist would stop to help eventually, but then I’d be in the situation of being a lone female depending on a stranger’s help, which is uncomfortable no matter how nice they are because you can’t help thinking they might be a serial killer trolling the highways for prey.

Anyway! The passenger’s side door did start to make a disturbing rattling sound outside of Lexington, but I eventually figured out it was caused by a pair of sunglasses in the storage pocket rattling against each other. I did get my car checked out before I left for the trip, so I was glad that hadn’t been for naught.

Whenever I go on long car rides I make friends with some of the vehicles. The guy in the blue Prius would pass me and then 10 minutes later I’d pass him and then 10 minutes after that he’d pass me again. I followed the yellow Estes truck down I-40 for at least an hour. Then I followed the Royal Cup truck through Tennessee. Actually, I followed a lot of trucks because I am evidently one of the slowest drivers on the expressway. Probably 80% of the drivers were passing me, and whenever I passed someone I was shocked someone was going slower than I was. It was a little sad when I parted ways with one of my highway friends at the interstate split. I don’t know who was driving or what their name was, but I still get attached to my familiar fellow travelers.

The last two hours of the drive were the worst, in both directions. It was at that point that any stiffness or tension in my muscles caused my headache to rev up, and my foot really started to hurt. But I figured it was just pain and I know how to deal with pain, so I kept driving. And I made it! I was so proud that I made it! It was a nice reward to pull up to an apartment with this inside: 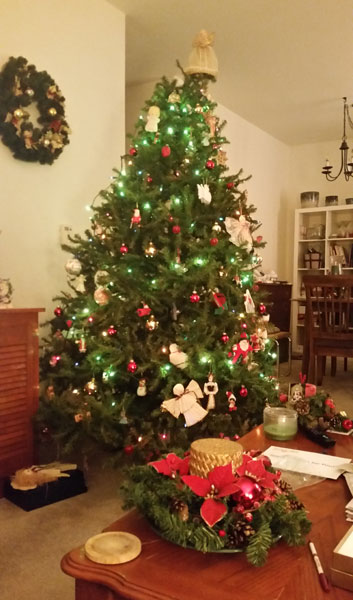 The Sunday traffic on my drive out was really light, so to balance things out the traffic on my way back was heavy. Did you know that the Dollywood area is evidently a very popular after-Christmas hot spot? The line for that exit off the highway was crazy long and caused a major traffic slowdown.

Later: My family didn’t exchange gifts this Christmas and it was awesome
Earlier: And we all fall down…or just me, actually
Home: Main blog index