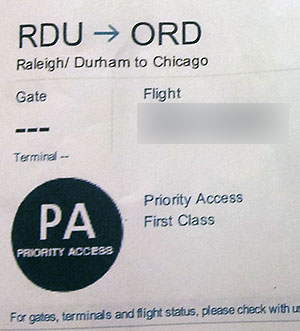 I don’t have an official bucket list, but if I did “flying first class” would definitely be in the top ten entries. So when I was checking into my flight to Chicago for Thanksgiving and the computer screen asked me if I’d like to upgrade to first class for $90 I thought about it for three whole seconds before I decided, yes, I would love to upgrade to first class for $90! Congratulations, American Airlines, you targeted that up-sell screen to exactly the right person at exactly the right price.

It will surprise no one that first class was awesome, but I was surprised that it was even more awesome than I expected it to be. Basically, they get rid of all the unpleasant parts of flying that they can and then they distract you from the parts they can’t get rid of with food and drinks and movies. The best part for all five feet and nine inches of me was that I had so much leg room that I was able to cross my legs. I could bend over and get things from my carry-on bag without splaying my legs out and knocking them into the person next to me like I usually do in Economy Class. I didn’t have to worry about that ooky feeling of invading someone else’s personal space. 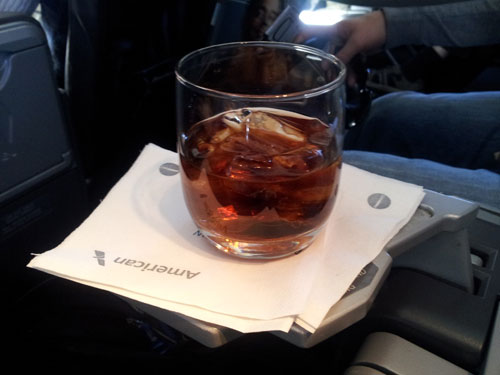 They served drinks in real glasses. For free! (Ok, technically as part of that $90 upgrade fee, but they had the appearance of being free!) When the stewardess came down the aisle she asked if I wanted a refill as if I were at a restaurant, and I didn’t even have to tip her! There was also a mini-tray table that came out on the top of the armrest, so my lap was free and I could still easily get things from my bag. 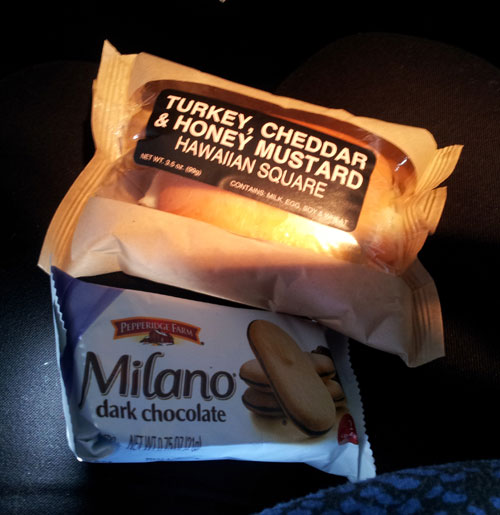 There was a snack basket. An actual wicker basket filled with snacks! And it had real brand-name food in it like Milano cookies. They had mini-sandwiches that were served in puffed plastic and paper wrappers. I was also given a little white plate with mixed nuts, and the plate had been warmed! I was given a warmed plate of nuts! Who knew people lived like this behind the big blue aisle curtain?

There was a video screen attached to the back of the seat in front of me that had a large catalog of movies to choose from. They even had films that hadn’t been released on DVD yet. I would have loved to finally watch Boyhood but the flight from Raleigh-Durham to Chicago wasn’t quite long enough to fill the runtime. I hear if you’re in a plane crash your whole life flashes before you, but it would have taken almost three hours for Boyhood‘s life to flash before me. 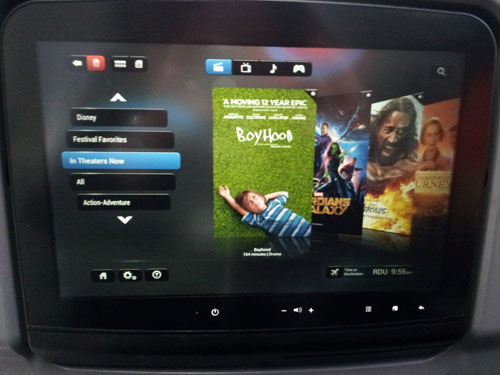 The guy in front of me was one of those fidgety people who bounces around a lot during the flight, making his chair rock back and forth when he grabs for something or repositions himself in his seat. I always seem to get stuck behind these guys in Economy Class. All that movement causes the seat to bang into my knees several times during the flight which causes me to fantasize about garroting my fellow traveler with my shoelaces. Not this time! This guy could have been in a rocking chair, but I had plenty of buffer space to avoid a collision.

The seat was so comfortable that I didn’t mind sitting there waiting for everyone else to board. I got to board first, did I mention that? It was fun because you don’t have to sit in the airport paying attention to the gate agent, waiting for her to call your section. You’re first up! There will definitely be room for your bag in the overhead compartments. I didn’t even mind the 15 minute delay on the tarmac. I actually enjoyed the fact that I’d be able to stretch out my first-class experience a smidge longer. And as sad as I was to finally leave the first-class cabin, it was fun to be one of the first people off the plane instead of sitting around waiting and waiting for everyone in front of me to get off first.

The whole experience was lovely, and it actually made me want to be rich for a moment. If I could fly first-class anytime I traveled I doubt I would mind air travel at all. For the most part I’m satisfied with my income level. I’m not wealthy, but I make enough money to meet my basic needs and to afford little luxuries like Netflix and Spotify Premium. My car works and gets me places, even if it’s not shiny and new. Life is pretty good, especially when you compare it to the quality of life of other people on a global scale. If everyone lived like I do the carbon footprint would stomp the earth to death. However, I still sat there in my extra-wide seat wishing I had enough money to do this all the time. *sigh* I looked around the first-class cabin and wondered how many of these people got to do this all the time, either because they were wealthy or because they were frequent flyers who got free upgrades. I tried to take my photos surreptitiously so I wouldn’t be outed as the newbie I was. 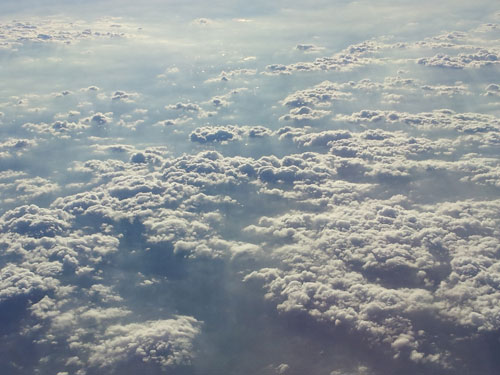 The view out the window during my flight was gorgeous. There was a mix of wispy and fluffy clouds, and the lakes below glinted like gold specks. This was not part of the first-class experience. This was part of the planet Earth experience, and even if I can’t fly first class all the time I’m glad I at least got to do it once.

Later: The best rejection letter I ever got
Earlier: What a waste. A valet waste.
Home: Main blog index