Last month a friend let me know she saw a picture of my book, Half-Assed: A Weight-Loss Memoir, resting next to a bag of doorknobs in a comment on this Gawker post about a guy on an airplane who started screaming that he had ebola, and she wanted to know, hey, what the heck was up with that? 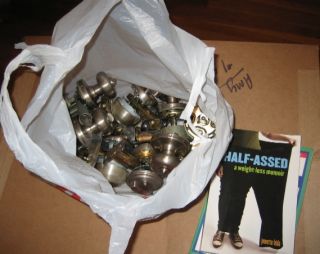 Yeah, what the heck was up with that? The only other time I’ve seen my book appear as background in a picture was on a post on the Carrots ‘N’ Cake blog where the blogger’s book was sitting next to mine on a bookshelf. At least that made sense, alphabetically, since our last names, Fulda and Haupert, are only two letters apart. (Couldn’t find the picture, but I’m sure it’s out there somewhere.)

Working backwards, I determined that the image had been used because the commenter said they thought the man screaming about ebola should have been hit with a bag of doorknobs. If I had been the commenter and I were looking for an image to illustrate that oh-so-humanitarian thought, I would do a Google image search for the term “bag of doorknobs,” and whattayaknow! That image is currently the first result you get if you do that search. 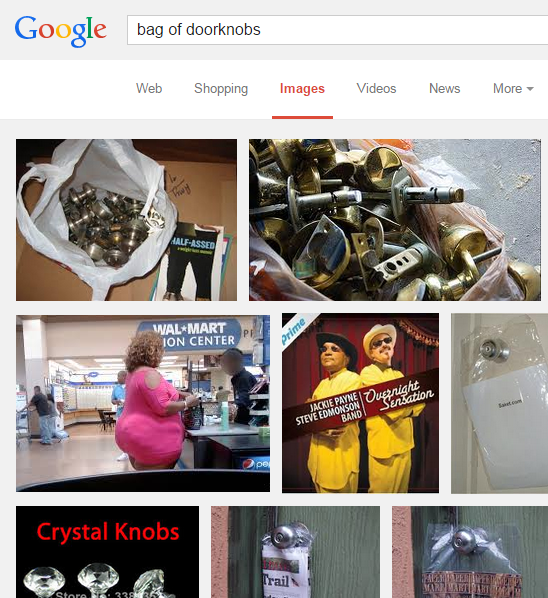 (Uh, I have no idea what’s up with that second row of images either.)

Once I clicked on the link to the page using the image I discovered it had been used in a post on my friend Amy’s blog. She used to date a contractor and the bag of doorknobs was given to her by a friend who’d replaced all the doorknobs in her house and figured the old ones could be used in the boyfriend’s line of work. I’m still not 100% why my book is in the picture, though it sounds like Amy might have gotten a copy of it in the same exchange, or she was just including it because my book had only recently come out. Whatever. It suddenly made a whole lot more sense than it did when I saw it randomly on Gawker. You can see the name “Amy” written on the cardboard box in the photo, which was a hint I completely missed. I’d also forgotten I’d commented on the post asking if I could pay her for the promotion in door hinges, which made me laugh and then made me feel narcissistic for laughing at my own joke even if I couldn’t remember making it. I never gave her any door hinges either.

I felt relieved once I figured this out because suddenly the universe made sense again and wasn’t a place where an image of me in my fat pants appeared in strange photos on gossip sites. Not that I’m complaining about free advertising. However, the incident did make me think about a few things:

1) If I were purposely trying to make a picture become the top Google Image search result for “bag of doorknobs” I doubt I could actually make it happen.

2) If I were truly hardcore about my self-promotion, I could start including the cover of my books in every single photo I ever post on the off-chance one of those images becomes a top Google Image search result and is used on a prominent web site.

3) The universe is unbelievably random. There is no way Amy could have realized back in 2008 that her photo would be the top search result for a phrase someone was using in a comment on a post about a disease that had not yet come to the United States on a blog that another friend of mine reads and would tell me about. Who knows what events this post itself has put into motion that won’t manifest until 2020?!

Anyway, mark this mystery of the InterWebs solved.