The post office lost a package that I sent to my mom last month. It would be a lot more interesting if it had been destroyed in a truck fire or stockpiled by a delivery person who was too lazy to finish their route or ended up on that desert island with Tom Hanks in the movie Castaway. Unfortunately, I have no answers as to where it went. It’s just plain lost. 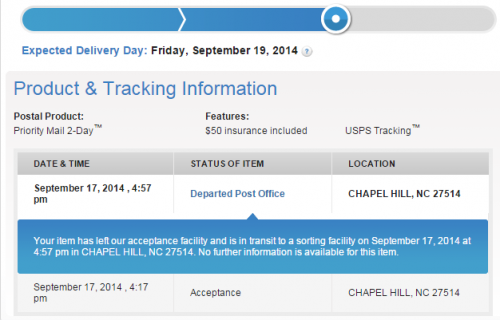 As this screenshot from the tracking page shows, the package was dropped off and accepted at a Chapel Hill post office at 4:17pm on September 17th. It departed the post office for a sorting facility at 4:57pm and then…nothing. It got sucked into a black hole or fell behind a machine or was stolen or something. It’s sad little bar code was never scanned again.

Ironically, I mailed another package via first class mail to my dad on the same day and it was delivered fine. I used Priority Mail for my mom’s package, which is more expensive and supposedly more reliable, and it’s the one that got lost. And before anyone accuses me of playing favorites with my postage fees, the reason I didn’t use Priority Mail for my dad’s package is because the box was too small for the Click-N-Ship labels I use to print postage at home which let me avoid the long lines at the post office. My mom’s package was larger, so I used Click-N-Ship, which doesn’t allow you to print first class postage.

The package was in truth a yellow, padded envelope that contained a 2GB USB drive and a note to my mom. That’s it. Nothing of huge value, so I don’t think anyone would have purposely stolen it. How badly could someone need a USB drive? I needed to send my mom some files and this was easier than trying to explain DropBox to her. The files aren’t that personal, so I’m not too worried about someone finding the drive and looking at them. The real pain comes from the fact that it was my favorite USB drive! It was the New Balance branded drive I got at FitBloggin’ several years ago. I only sent it because I thought I’d get it back at Thanksgiving. And now it’s gone forever 🙁 It is sort of maddening knowing that the USB drive still exists somewhere out there in the world, but I will probably never find out where. It must be truly horrible to lose something that’s irreplaceable and beloved, like a pet or a child.

I did try to get the post office to find the package. I called the customer service line on the 24th, a week after the package was mailed. They assigned me a case number and said someone from the post office where I mailed the package would call me by the end of the day tomorrow. No one called me. I then called the customer service line again on the 26th and they said someone would call me by the end of the day tomorrow for sure. No one called me. At this point I started humming that Blues Traveler song, Runaround. Since the USB drive was easily replaceable, I gave up at this point. If I’d been more motivated I probably would have gone down to the post office and demanded answers, but who has the energy or time for that? This organization loses about $1 million dollars a day. I don’t think they care too much about losing a USB drive on top of that.

The nice thing about Priority Mail is that it’s automatically insured for up to $50, so I was able to file a claim on the USPS web site. They require some sort of proof of value, so I took a picture of the receipt from Staples where I bought a replacement. You have to swear that everything you submit is the truth, which made me a bit paranoid. Would the post office come hunt me down if they found a USB drive cheaper somewhere else? I submitted the claim on October 3rd and it was approved on October 7th, which was waaaaaaay faster than I’d anticipated. I was ready to wait 60 days for that thing to go through. The check came in the mail the next week.

Of course this begs the questions, what if the check itself had gotten lost in the mail? Would I have had to file another claim about that?