Last fall the Democratic National Committee called asking me for money. They must have caught me in a good mood because I said, “Yeah, sure,” and shocked the hell out of the caller who sounded notably surprised. I must have been that one person out of a hundred who didn’t tell him where he could stick the Declaration of Independence. I don’t donate that much money to charity or causes, but the Democrats really did me a solid when they passed the Affordable Care Act, so I figured the least I could do was send them twenty bucks.

Of course, that donation meant I was immediately put on several Democratic mailing lists. They even sent me an official membership card, which I don’t think I’ve received for anything since I was a member of the Strawberry Shortcake fan club as a kid, and in that case the membership card was scented. I was not surprised that the Democrats had added me to their mailing list, but I am sort of surprised by how many “gifts” they keep sending me.

First there was the 2014 Commemorative Presidential Print… 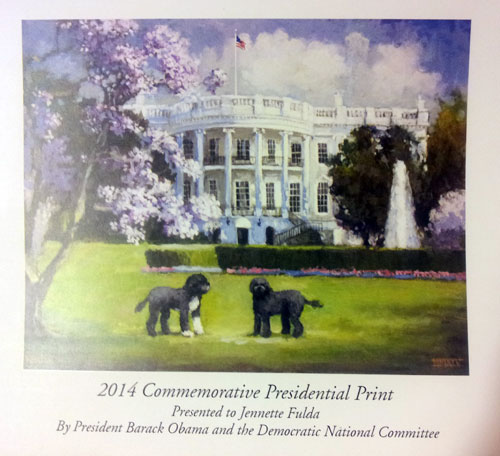 ..that came with a Certificate of Authenticity, as if I’d ordered something from the Franklin Mint. 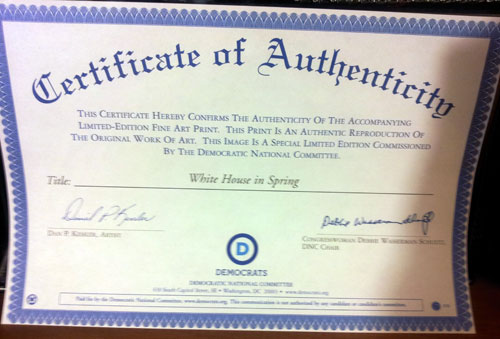 Then there was a birthday card for the president, which I think I was supposed to sign and mail back with another donation, of course, like I was his grandma sending him a fiver. 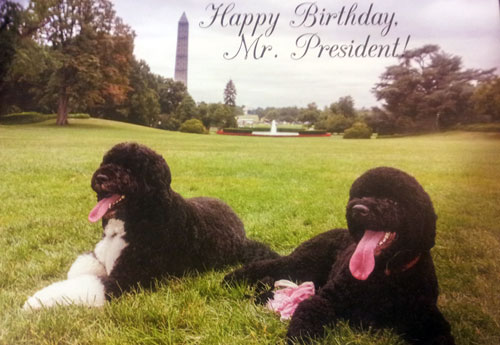 They also sent me a picture of Obama and one of the dogs. 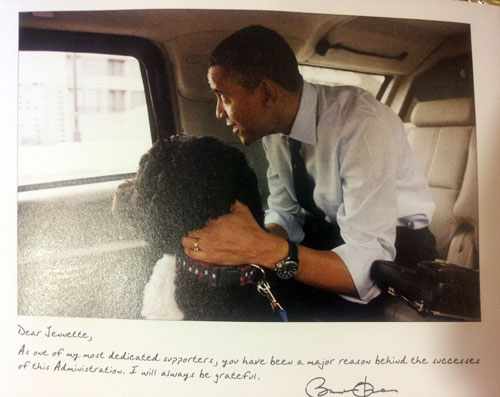 So many of these items have featured the presidential dogs, that I have to wonder if my twenty dollars secretly went to Bo and Sunny’s kibble fund. It is quite possible they have their own SuperPAC. More likely it’s because anyone standing next to a cute dog instantly becomes more likeable, even if you’re a cat person like me. 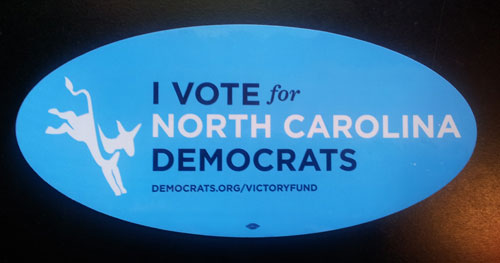 It hasn’t stopped yet either because this week I got a bumper sticker from the North Carolina Democrats, which I will not be putting on my car because I’m at an age where I care about my car’s trade-in value.

All of this leaves me wondering, at what point will the Democratic party spend so much money on postage and swag that they will have actually lost money on me? My curiosity is the main reason I have not asked to be removed from any of the mailing lists. I’m waiting to see what they will send me next. If they truly knew the way to my heart they’d send me candy, maybe some blue gummi jackasses. Then I could go around telling people to bite my ass in a totally patriotic way.

Later: If you’ve ever used a smartphone at a movie theater, please tell me why
Earlier: Get off my lawn!
Home: Main blog index