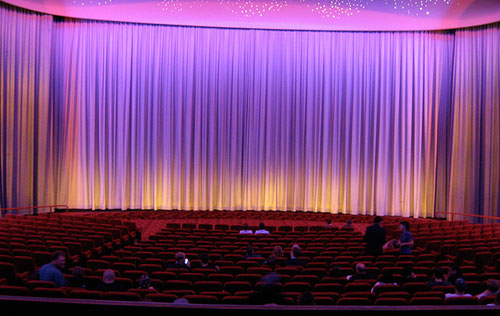 I saw Guardians of the Galaxy last week and although the movie was great, the people around me were horrible. I had to ask not one but two women to please stop using their smartphones during the film. (One of these women also basically felt up my thigh as she got out of her seat during the credits, but being groped by a stranger is a whole different kind of horrible.) While I’m glad I’ve conquered the social anxiety that would have once prevented me from asking a stranger to knock that shit off, I find myself genuinely clueless as to why this kind of thing happens in the first place.

It’s undeniable that flashing a bright screen around a dark theatre will distract the people around you, and I assume that most people know that doing so is rude and annoying. Yet I can’t remember a time in the last year what I went to a movie theatre and somebody didn’t do that. All of which leaves me asking the question, why? WHY? WHY?!

I can only think of two acceptable reasons for using a smartphone during a movie:

1) If you know you might be having a family emergency. Perhaps someone close to you is gravely ill. Maybe someone is expecting a baby that could be born at any minute. In these cases I can understand why you’d want to quickly check your text messages during a show.

2) If the movie is really, really, really bad. Like 3% rating on RottenTomatoes.com bad. Mortal Kombat: Annihilation bad. So bad that tweeting or texting someone to tell them about the badness of the film is the only way for you to get any enjoyment out of the movie at all.

Other than that, why are some people incapable of putting away their phones? It concerns me, and not in a patronizing, I-feel-so-sorry-for-you kind of way, but in a genuine, you-are-interacting-with-your-phone-like-it’s-an-addictive-substance-and-you-need-help kind of way. Some people can’t seem to spend more than 10 or 15 minutes away from their phones, just like some people have to sneak out for a smoke break every hour or two. It reminds me of a scene from an episode of The Office (which I can’t seem to find on YouTube) where Ryan is asked to hand over his phone to a bartender during a round of trivia the coworkers are about to play. Ryan isn’t able to do it and just backs away, shaking his head, unable to be parted from his phone.

I understand how attached we can become to our phones. There have been two times when I thought I’d lost mine and the freak out that ensued made me realize I may as well start calling it “my precious” in a Gollum-like accent. I like my phone very, very much. I also understand the appeal of using a phone while you’re doing something else. I have been known to play Candy Crush Saga as a rerun of Castle is playing on the TV. Even right now I’m not content just to be typing a blog entry, but also have Star Trek on in the background, though I have the volume off. I understand that desire to seek a bit more stimulation, to check in on what other people are doing, to not be bored (and to split infinitives).

That said, I can step away from my phone when I need to. When my mom and I were at Dollywood I went basically all day without checking Twitter or Facebook. When I was at Dollywood, I was present at Dollywood. I watched the glass makers and metal smiths and the fiddle shows, and when I came back and saw people on Twitter complaining about the iPhone interface design changes, the chatter all seemed dumb and unimportant in comparison to going out and having a new experience, even if that experience was at a place called Dollywood.

It seems like some people are losing the ability to be present at the place they are, to focus just on what is in front of them. If you’re at the movie theater, be present at the movie theatre. The environment is designed to immerse you in the experience. The lights are turned off and the speakers surround you. You’ve paid ten dollars and left your home to be there. Why are some people not content to be there, but also must be elsewhere too?

I think this is partly a generational thing. Kids who were raised on multiple screens might not be as annoyed by this or even view it as problematic behavior as a thirty-something woman like me who remembers the days when you had to sit in a theater and do nothing while you waited for the film to start. No trivia slides. NOTHING. I occasionally brought a magazine with me if I was seeing a movie alone. Magazines do not light up in the dark.

It seems like this is not a problem that is going to go away, so I see only three possible solutions.

1) Have a smartphone section, just like we used to have a smoking section in restaurants. Instead of air pollution we’d corral light pollution. No phone calls allowed, but if you sit in the back five rows you’d be free to use your screen as much as you want.

2) Distribute blinders for patrons who don’t want to be distracted by screens, like the kind put on horses during a race. If you can’t see to the left or right you won’t be distracted by the light of a phone. Of course you would also be much easier to mug during the film.

3) Before each movie ask everyone around you if they plan on using their smartphone during the film, and if they do then move to another seat. This one sounds like the only plan I could actually implement, and I’m seriously considering doing this from now on.

I also have some questions for my readers. No one will be taken to task or shamed for their replies. You don’t even have to use your real name or email address on this one entry. Total amnesty granted.

Have any of you ever used a smartphone during a movie? If so, what were you using it for and why? Did you view it as rude behavior and if so, did you care?