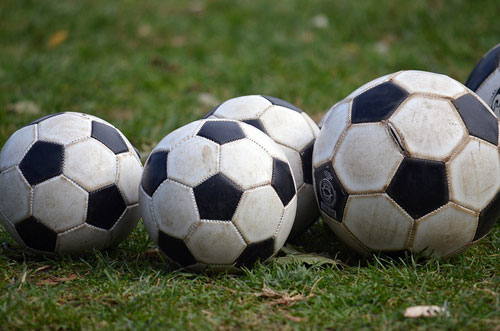 There are three things I remember about the World Cup held four years ago:

1) The sound of vuvuzelas could not be ignored in clips shown on the news. YouTube even added a vuvuzela button temporarily to its player so you could add the sound to any video.

2) I listened to the final in Spanish on the drive back from the IKEA in Charlotte in an SUV I’d rented with my brother. We couldn’t find a channel broadcasting the game in English, but we could pretty much figure out what was going on by the excitement in the announcer’s voice. I also remember pulling up in front of my brother’s house, fiddling with the buttons to try to turn off the radio, and accidentally turning on the satellite radio we could have been listing to the whole time. Whoops!

3) There was a psychic octopus named Paul who accurately predicted the outcome of 11 out of 13 matches, and then died several months after the final.

I didn’t anticipate caring about the World Cup this year because I’m an American and as everyone knows, Americans don’t care about soccer. However, I’m with the rest of the world in thinking it should be called “football” and we should call American football something else. Regardless of my US citizenship, I somehow got sucked into the World Cup this year and watched several games. Honestly, I blame the Google doodles. They had so many cute, animated doodles running throughout the month that I felt like I should watch the games just to be more informed.

I didn’t play soccer as a kid, and I haven’t watched soccer on TV before, so I learned several things about the sport that seemed weird to me but probably are accepted as normal and obvious to everyone else on the planet.

There are no time outs
I was surprised to watch my first game and realize the players on the field were expected to run around non-stop for 45 minutes each half. Like, woah, that’s a lot of running. I’m so used to time-outs being part of game strategy in other sports like basketball and American football that it was bizarre to watch a game where the clock never stopped. How do advertisers feel about this? Half the fun of the Superbowl is watching all the clever ads during time-outs and other natural game breaks. It’s hard to think TV networks would be able to make as much money off of a televised soccer game as they do on an NFL game. The only ad I could spot was a little Coca-Cola logo next to the score bar.

No one knows exactly when the game will be over
Because there are no time outs, referees tack on extra minutes to the period to compensate for time lost by injuries and other stuff. But you never know how many extra minutes there will be until you cross the 90-minute mark. Knowing how much time you have left is so key to strategy in other professional sports that it’s got to be frustrating not to know how much longer there is in the game until it’s almost over.

On the bright side, they usually don’t add that many more minutes. I bet that makes it easier to predict how much television air time to block out for the match. In the fall I’m always annoyed that NFL games run long and bump the rest of the shows that evening to an unpredictable number of minutes late. It makes it really hard to program your DVR.

The referees are out on the field with the players
I’m used to seeing referees on the sidelines of games, but in soccer they’re out there in the middle of the field with everyone else. I’m surprised they don’t get run over more often than they do. And considering how seriously people take this game, I’m scared for what might happen to a ref who gets in the way and accidentally prevents a team from making a goal.

Something ALMOST happens all the time
During one of the games I was working on my computer but was listening to the TV in the other room. It was funny to listen to the announcer’s voice get really, really, excited and then….oh, sorry, no goal. And then to get really, REALLY, excited and…nope, no goal then, either. Repeat, ad infinitum. I finally understand why people scream “GOOOOOOOOOAL!!” when their team scores because there are about 10 fakeouts before you get the real deal.

As a result, it also makes people really, really happy when they score, happier than I’ve seen a team get in any other sport. I love how the team members run into a big group hug and all celebrate together, unlike in other sports where it’s usually just one person or a couple doing a victory dance.

The cup itself is kind of ugly.
I was disappointed when I saw the actual World Cup awarded to the winning team. It’s not that large and I think it’s kind of ugly, right up there with the mirror-ball trophy awarded to the Dancing With the Stars champs each year. Considering this is the biggest sporting event in the world, and FIFA is a corrupt organization that has a bazillion dollars, couldn’t they come up with something nicer?

The World Cup was fun, but I doubt I’m going to start watching professional soccer matches. I rarely watch professional sports of any kind unless I’m personally invested in the team for some reason. But four years from now I’ll probably tune in and I’ll definitely be looking for the cute Google doodles.

Later: I still have trouble introducing myself as a writer
Earlier: JenFul Playlist – April and May 2014
Home: Main blog index