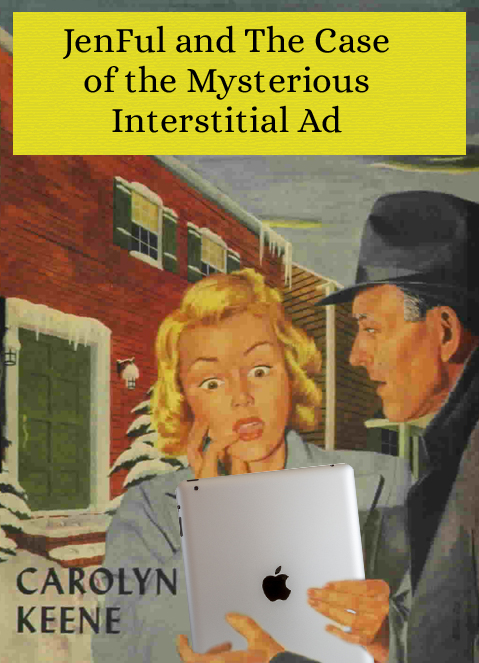 A full-page interstitial ad took over my browser a few weeks ago when I was visiting my blog, which was weird because I don’t have any advertising on my blog, and if I did I would never use a full-page interstitial ad because they are more annoying than my upstairs neighbor who moved out this week, thank the Lord! I thought it might be a fluke, perhaps something that was triggered by leaving a web page, not by entering my site. Then it happened a week later, and again two days after that, so I decided to put on my Nancy Drew hat to figure out what the hell was going on. Then I took it off and decided to put on my Veronica Mars hat instead because she’s way cooler than Nancy Drew and more in touch with modern fashion. 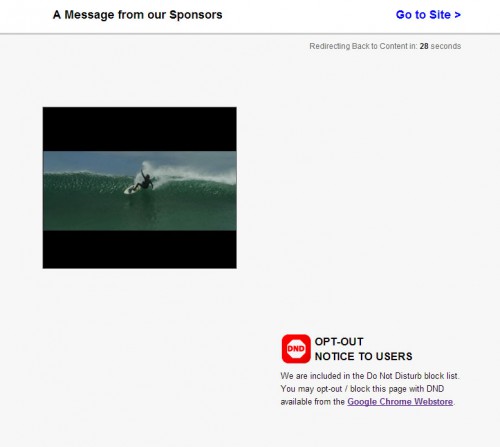 In case the ad was being triggered by malware on my computer, I ran a virus scan and also downloaded MalwareBytes to run a malware scan. A few cookies were deleted, but otherwise my computer was clean. Then the ad appeared a day after my scans, so it was fairly safe to assume the ad was not being caused by something on my own computer.

Next I asked my Facebook followers if any of them had seen the ad, and three people had. They were all using different browsers, so I figured it wasn’t anything browser-specific, but it was definitely something happening on my site.

Next I tried Googling sponsor.adverstitial.com which was the address of the page the ad forwarded me to. This is when I realized I’ve become spoiled by expecting Google to answer any question I have within the first 3 or 4 listings on the first page of results. When I Googled sponsor.adverstitial.com nothing helpful came up. A lot of people were complaining about the ad, but no one had figured out what was causing it. I had to wade at least 10 or 15 pages deep into the results before I found anything remotely helpful. Eventually I found a support thread on the WordPress.org forums in which someone had posted about the same problem 6 hours earlier. Over the course of the next day or two we finally figured out what the culprit was.

The culprit was SITEMETER!!

Any youngins out there might not remember Sitemeter, but it’s a free web stats service that was pretty popular before Google Analytics ate up most of the market share. If you’re wondering why I was still using it, I like that it’s simple. When I log into Google Analytics I feel like I’m operating the control panel of a space shuttle. There are a bazillion options and a bazillion ways to track goals and campaigns and other things that I do not understand. I feel like you would need to earn a degree in Google Analytics to fully understand every feature. The nice thing about Sitemeter was that you could log in and easily see how many pageviews you’d had. There were easy-to-understand bar graphs. It was easy to see your most recent page referrals. They’d also email a stats summary to you once a week that was handy and quick to read. Simplicity, it’s underrated.

Unfortunately, Sitemeter is now EVIL too and inserts ads on web sites without permission. And they might have gotten away with it too if it weren’t for you darn kids and Google! I’ve removed the Sitemeter code from my site and I haven’t seen the mysterious interstitial ad since. If anyone else runs into it after today, let me know. If you’re using Sitemeter on your site, I recommend you remove the code because it might be inserting ads on your page without your knowledge.

Thus ends The Case of the Mysterious Interstitial Ad. I think I’ll knock off work early, have a soda pop with Encyclopedia Brown and Sally Kimball, and find out what Bugs Meany’s been up to lately.