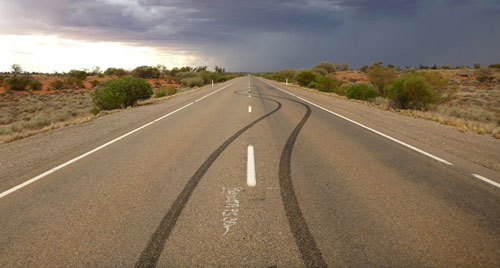 I was almost killed on the highway this week.

I was driving in the right-hand lane of I-40/I-85 doing the speed limit in attempt to avoid the crazy, madcap maneuvers that transpire constantly on this four-lane highway. Suddenly the driver of a white sedan two lanes over seemed to realize he was about to miss his exit, so he swerved across several lanes of traffic on a direct collision course for me. Why go to the next exit and turn around when you could endanger the lives of everyone on the road instead, right? I jerked the steering wheel to the right, slammed on my brakes, and somehow managed to barely end up on the exit ramp he’d been aiming for, though I’d traveled way outside the painted lines. I didn’t check, but I’m fairly certain I left skid marks on the road.

How did we avoid a collision? I do not know. If I’d been fiddling with my MP3 player at the time, we probably would have crashed. Thankfully I was paying attention to the road and my body reacted without much thinking. The only two thoughts I remember having while I swerved were “Don’t overcorrect!” because people in accidents often swerve too far to avoid a crash and end up causing another one, and “Dear God, I hope there’s not a concrete divider at the corner of this exit ramp.” Thankfully there was not.

As I continued down the ramp I could see the white sedan in my rearview mirror. I seriously considered giving him the finger as I drove on, but didn’t because I was so shaken up. If I had it to do over again I would definitely give this asshole the finger. He’d nearly ended the story of me and I am not ready for the credits to start rolling yet.

The funniest part? This all transpired at the Efland exit. Effing Efland indeed!

The second funniest part? I was on my way to a biofeedback appointment where I was supposed to learn how to control my breath and heart rate so I can be zen and chill out. As you might have guessed, nearly dying on the expressway is not good for your resting heart rate.

This incident was the second scariest thing to ever happen to me on the highway. The only thing scarier was the time I was driving in the snow and someone sped past on my left, throwing so much snow on my windshield that I could see absolutely nothing as I was travelling 60 mph around a curve. The second it took for my intermittent windshield wipers to clear the windshield was probably the longest second of my life. At least during my most recent incident I could see what was happening and had the chance to determine my fate.

I don’t know how the physics would have played out if we’d collided, so I don’t know if I would have been killed or seriously injured or just left with a case of whiplash. I’m really glad I did not find out. But the whole incident made me realize how ridiculous it is that we drive around in metal projectiles at inhumanly fast speeds and like to pretend that we’re assured we’ll get where we’re going without getting dead. In this case I did absolutely nothing wrong. I wasn’t even going 5-10 over the speed limit like I normally do when I drive in town! My life could have come to an end because some asshole couldn’t be bothered to check his blind spot.

After the near accident I started to wonder what would have happened if I had been killed. Who would tell my family? Would someone feed the cat in a timely manner? How long would it take for my clients to find out? Would they ask my family for their deposits back since the dead girl obviously wouldn’t be able to finish their web sites? What was the last thing I blogged about? The last thing I tweeted? Would anyone be able to get into my various online accounts to close up matters? Where would the funeral be? How many people would come? Would I be buried or cremated? Did I leave anything embarrassing in my apartment? On my hard drive?

They say the most dangerous part of flying is driving to the airport, and when you’re driving on I-40 I believe this is especially true. I have heard more stories about crazy shit happening on I-40 than I have about any other highway in any town I’ve lived in. Granted, this might be because we have social media now and I’m much more likely to hear about other people’s horror stories on Facebook than I was when I lived elsewhere.

The ironic thing is that I used to be much more aggressive on the expressway than I am now, mostly because I used to drive on the expressway all the time to get to work. I knew exactly what lane to be in to avoid the slower traffic and when I should start moving toward the right lane. When I was in college I would sometimes drive 80 mph down I-64 as I traveled between Lexington and Louisville, feeling like I was flying when I soared down the bridge across the Kentucky river. If I could talk to my college-aged self I would say, “SLOW THE HELL DOWN!!!!” Good God, girl, don’t you know you’re driving a missile? I am a much more cautious driver now that I only travel on the highway once or twice a month, and when I do it’s usually only for 3-5 miles each way.

On the way back from my appointment I saw a set of black skid marks at another exit and it made me wonder like I never had before about what had happened to cause those skid marks and if the driver had been as terrified as I had been. Every skid mark tells a story. If you ever visit Efland you’ll drive past mine.

Later: How I learned to love a big purse
Earlier: This is why you should read the description carefully
Home: Main blog index