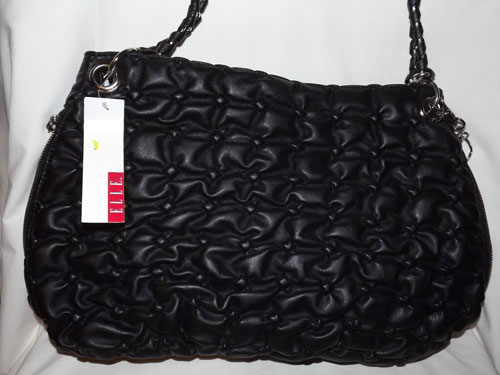 I used to dislike big purses. When you have a large bag I think there is a temptation to fill it up, just like when you have a full plate of food there is a temptation to eat it all whether you really need to or not. I’ve also heard stories of women developing back problems or a larger bicep on their “purse arm” because of the weight of all that stuff crammed in their bag.

Just owning a purse at all was a compromise for me. Why do women need to carry so much crap around when men don’t? It seemed sexist in some way, like women were literally weighing themselves down in a way men don’t. But I finally broke down and got a handbag in my early twenties when I got a job. At first I walked into the office every day carefully balancing my wallet on top of my CD cases on top of my headphones until it finally occurred to me one day, hey, wouldn’t it be great if I had some sort of bag to carry all this stuff in? Like, I don’t know, A PURSE. So I caved and crocheted myself a hobo bag and decided the convenience was worth any girlish stereotypes it invoked. (Crochet isn’t exactly considered a manly art form.) However, I vowed that I would only get a bag big enough for what I needed, not a huge purse that looked like it would require to me to win an Olympic medal in weightlifting to carry it around.

After years of resistance, I tricked myself into purchasing a big purse last year when I was doing Headache on the Hill which is an event where headache sufferers and headache doctors run around Capitol Hill talking to their Congress-people about what they can do to help us. The key here is the phrase “running around.” You walk a lot. A LOT. Several miles in fact. It helps your lobbying efforts if you don’t show up in sneakers. (We can’t all be Wendy Davis.) But I didn’t want to walk 3 miles in heels either. I needed a bag that I could stuff one pair of shoes in while I was wearing the other, but all I had were cheap looking canvas bags. So I went to Kohl’s and got a big, black, quilted bag that was large enough to hold my sneakers, never intending to use it after I got back from DC.

Too late! It turns out I was totally wrong. I fell in love with my big purse before I knew it! If anything it’s men who are being sexist dopes by refusing to carry around a bag with the stuff they need. Women have outsmarted them! There is tremendous power to be leveraged when you’re the one who has chapstick and gum when someone else has dry lips and a parched mouth.

First off, it’s sooooo much easier to find things in a big purse, assuming that you don’t fill it to capacity. When I used a small bag I was always digging around in the cramped quarters trying to find an item. Everything was stacked on top of each other. Now that I have a big bag, it’s easy to find things because there’s so much space to move things around in.

I also never realized how incredibly convenient it would be to be able to stuff random objects in my bag instead of carrying them separately. It’s AMAZING what I can fit in this purse: 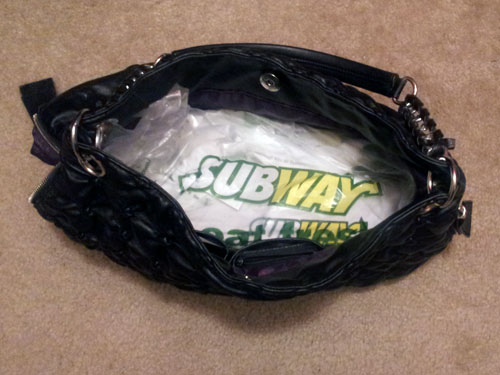 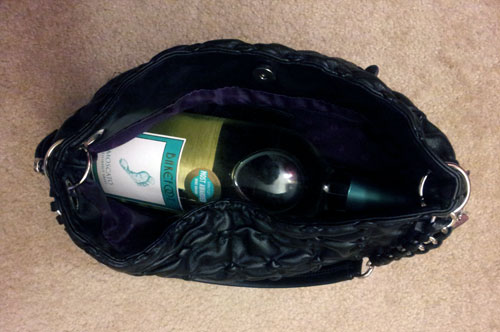 A bottle of wine!

I can stuff all my mail in my purse even if it contains catalogs and magazines. I can put an umbrella in there if I think there’s a chance it might rain later. I could probably fit a cat in there if there was ever cause to do so, though I doubt the cat would stay in there for long. Everyone knows cats prefer boxes.

The bag has several compartments which are larger than the compartments of my other smaller purses, so I’m able to keep things like my cell phone in a separate pocket making it easier to find. The bag I have has a side pocket that allows me to access it without even taking the bag off my arm, which is even more convenient.

Anyway, this is me proclaiming that I was wrong. Big purses are awesome. If used responsibly they will not cause back pain. They will only cause awesomeness.

Later: No email, no problem
Earlier: I was almost killed on the highway this week
Home: Main blog index