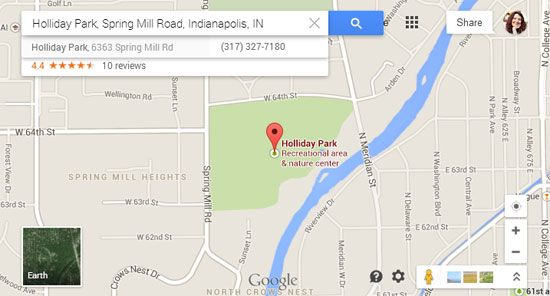 I read The Fault in Our Stars by John Green this weekend because I kept hearing about how highly anticipated the movie is. I was afraid the book might not live up to the hype, but it did, being equal parts funny and sad, exploring light-hearted topics like life and death and the fear of oblivion. Would you believe me if I told you it’s also a teen romance?

What I didn’t know is that the story is set in Indianapolis, the city I lived in for 10+ years of my life. I can’t recall ever reading a book set in a city I know intimately. The closest experience I can think of is when I watched the movie Stripes and recognized many of the locations in Louisville that Bill Murphy was driving through. There was also the time I watched the movie Eagle Eye and cracked up laughing when Shia LaBeouf’s character is supposedly running around 56th street in Indianapolis which is populated by skyscrapers in the film, but is actually a suburban neighborhood in real life.

I have mixed feelings about the affect the location had on me. On one hand, it was cool to read a book and recognize many of the landmarks or streets the author mentions. On the other hand, every single time a landmark or street was mentioned that I was only somewhat familiar with, I stopped reading the book and pulled up Google maps to confirm I was thinking of the right spot. Of great help was this photo tour site where someone went to every location in the book and took photographs. Evidently I’m not the only one a bit obsessed with this. Even though using real locations added realism to the book, it also pulled me out of the story momentarily.

It was also initially confusing when the author mentioned Memorial Hospital, a hospital that I do not believe exists in Indy. There used to be a hospital called Wishard Memorial, but it was recently renamed, and even when it was still Wishard Memorial I don’t recall it being the location of cancer research like Memorial hospital is in the book. (I could be wrong though.) The book also refers to Children’s Hospital, which could be the Riley Hospital for Children, but most people call that Riley, not Children’s, as far as I know. I’d guess the author used imaginary hospital names to avoid any libel issues, which is understandable. I did the same thing whenever I mentioned a hospital or a doctor in my headache memoir. However, when it happened in a book that also included lots of real locations it was jarring.

The only readers having this experience are the ones who’ve lived in Indy, which is probably a small percentage of the global readership of the book. But it was interesting to see how my personal geography history could affect the way I related to a book. Sometimes I felt like I was in on a secret because I figured out where the characters were going on a picnic just by a few hints about where they were driving, or when I learned one character went to North Central High School which is where I voted early in 2008. Other times I felt like the book would have been more enjoyable if I didn’t feel compelled to pause for a minute and try to figure out if the Speedway gas station at 86th Street and Ditch Road was close to the Staples store I remembered in that area or if it was farther past that.

Has anyone else had a similar experience reading a book set in a location you’re really familiar with? Did it add to or take away from the story?

Later: Guest post: Help my cousin Allison cure type 1 diabetes (and get a link in my sidebar)
Earlier: I’m pretty sure this person loves Frozen more than you do
Home: Main blog index