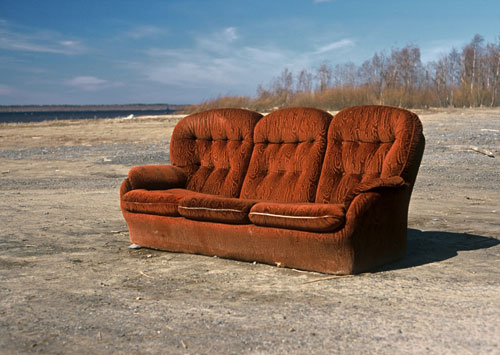 When completing the 5K to Couch plan it’s important that you drop off your activity gradually over a long period of time. If you’ve gained momentum by exercising regularly, stopping all at once is like slamming on the brakes and being thrown full force against your seat belt. It’s pretty hard to ignore. There were a few times during my weight-loss years when I’d have to take several days off from exercising because of an injury or illness, and it drove me nuts. I really wanted to get out there and continue my successful routine, but my body was not having it. Once I recovered, I would get back on the trail or the treadmill as soon as I could. If you’re going to stop exercising regularly it’s much more effective to press the brake slowly so you ease to a stop without hardly realizing it.

Obviously I never intended to undertake the 5K to Couch plan. So what set me on that path? A few things:

In 2008 I ran a half-marathon, and although I am incredibly proud to have run those 13.1 miles (ok, I might have walked 1 or 2 of them), it was WAY TOO MUCH RUNNING. Near the end of the program I had to run 45 minutes straight in the evening. I had to run 10 miles at 8am on a Saturday morning with my running group. It was kind of awful. I learned that I am not a long-distance runner. The longest race I would consider running after that experience is a 10K, which is about 6 miles.

Once the half-marathon was over my running dropped off because I was so sick of it. Something I’d previously enjoyed for its meditative properties became work I wanted to avoid. I love chocolate cake, but if I had to eat an entire chocolate cake everyday it would become sickening after awhile. The same goes with running.

Using injury as an excuse

A few years ago I developed tendonitis in my right foot. It took awhile for me to get it diagnosed as tendonitis because I kept waiting for it to heal on its own, and then it took me awhile to get a doctor’s appointment because I’d moved and wasn’t established at any medical practice. The tendonitis made it painful to walk, so I stopped walking unless I had to.

What I should have done was to find some activity to supplement walking, which had now become painful. What I actually did was nothing. I do recall riding my bike a few times, but it was a pain to carry it down from my second-floor apartment, which is a completely lame excuse, but evidently not lame enough for me to use on myself! It’s important that you find exercise you enjoy, otherwise you’re less likely to do it. Walking and running have always been my favorite thing, and I never managed to find anything I liked as much as that.

Comparing my current self to my past self

Once the tendonitis healed I did start walking again, but I was frustrated by the fact that I got exhausted sooner and could not go as far as I could previously. When you’ve previously been able to run 3 miles without breaks it seems pretty pathetic when you’re breathing heavily after walking just a mile. It’s like you’re a bird with a broken wing, frustrated that you have to walk when you used to be able to fly. I kept comparing my current self to my past self, which made me feel discouraged. I should have just gotten over it and focused on the positive aspects of the experience. I was out there! I was walking again! I could become more fit even if I never became as fit as I once was. Instead I was just hard on myself for the fact that I couldn’t have run a 5K anymore if I tried.

So, those are the big reasons I ended up doing the 5K to Couch plan. There might have been others, but those are the ones I’ve been able to identify upon self-reflection. So where do I go from here? Well, I suppose I could do the Couch to 5K plan, but a doctor told me I should not run because of problems with my knees. So if I were to do that it would be the walking version, not the jogging version. I’m considering doing the Up and Moving program that my friend Shauna recently launched on her Up and Running web site that runs online running courses for women.

I think the key is to do it slowly, just like it started, but to be consistent. I’ll let you know how it goes.

Later: This is why you should read the description carefully
Earlier: Guest post: Help my cousin Allison cure type 1 diabetes (and get a link in my sidebar)
Home: Main blog index