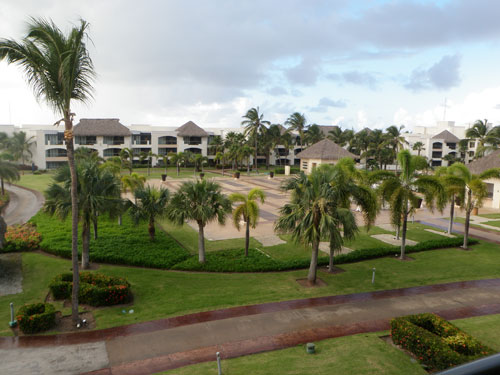 Read my first and second posts about Punta Cana if you missed them.

Although the resort is a lovely place to spend time, you could also book a short trip off the grounds to go zip lining, snorkeling, deep sea fishing, and other fun, tropical, things. There were travel agency reps in the business center who would book an excursion for you. When reading the brochures I saw an ad for a trip to the Chocolate Museum and you know they had me at the word “Chocolate.” Ultimately the trip ended up being a reminder as to why you should check Trip Advisor before booking excursions.

After missing my ride because of confusion as where to meet, I was able to rebook a ride on another shuttle which took me to a courtyard with several different buildings all guarded by a man at the gate with a shotgun. 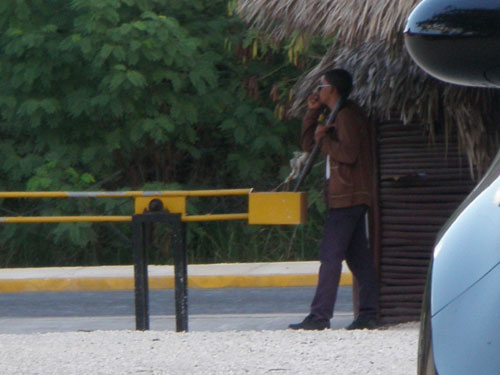 I would guess the armed guard was there to protect the cigar factory, not the chocolate store or the gift shop, or perhaps all that was a front for some illegal business going on in the back. Who knows? Needless to say, it made me feel a bit uneasy, particularly because the shuttle wouldn’t come back for another hour, stranding me at this location. The Choco Museo was basically a store. There were some exhibits about how chocolate is made, and there was a glass window where you could watch them working with the chocolate, but the tour was mostly a way to get you to sample chocolate and listen to them pitch products. Sorry, but I have no desire to buy chocolate shampoo! That said, my tour guide was sort of adorable. He spoke English very well, but he was still a smidge away from being totally fluent. During the “tour” he couldn’t remember the word for candy sprinkles, so I told him and then he asked me to write down the word for him. I admired that because it showed that he wanted to do his job well, even if that job was hocking chocolate to tourists. 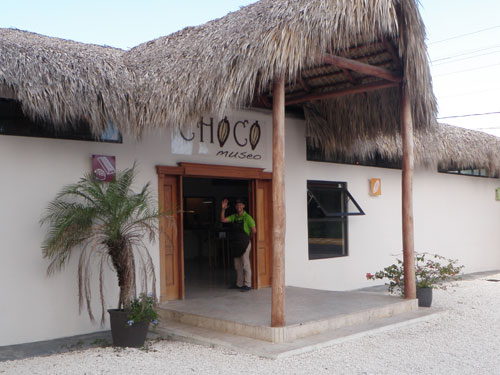 Surprisingly, I found the cigar factory to be more interesting than the chocolate store. (I will give you a minute to recover from the shock. Actually, take two minutes.) I got to watch two guys rolling cigars as another tour guide talked about the process. One guy was so hardcore that he was smoking a cigar while he was rolling cigars. My guide told me that the other guy had been rolling cigars since he was 12, which I think was meant to impress me but just made me sad about poverty and the lack of child labor laws in the Dominican Republic. 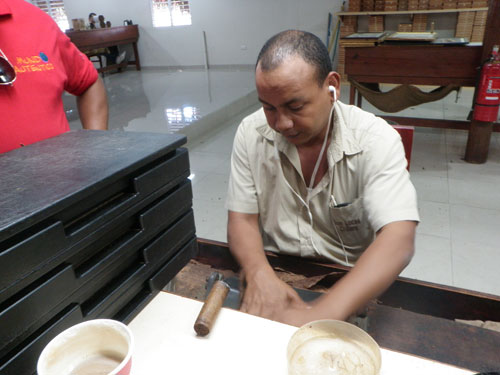 Thankfully I was able to find the right shuttle to take me back to the resort before darkness fell. On the way back the driver was listening to “One of Us” by Joan Osborne which made me feel strangely comforted. Not because the song is about God or about God riding a bus like I was, but because it was a song I recognized and because Joan Osborne went to the high school I would have attended if I hadn’t applied to the magnet school downtown. All of which made the world seem a bit smaller and more manageable. They listen to Joan Osborne here. I will be ok.

As you can gather from my posts, the vacation was really lovely. The only thing that left me a little uneasy was the unspoken class tension at the resort. Most of the visitors are white people who can afford to spend several thousand dollars on a vacation. Most of the hotel staff have darker skin and working class jobs that probably don’t pay enough for them to spend several thousand dollars on a vacation. Everyone seems to be aware of this without ever saying anything about it. I felt guilty that I had been sorted into the group with the better privileges not because of anything I’d done, but because of where I’d been born and what my brother did. I almost wanted to whisper to the staff, “I can’t actually afford this vacation! I’m not like those other gringos!”

However, I would not have been able to tell them that if I’d tried because my Spanish is crap. It is so crap that I don’t even know how to say “crap” in Spanish. Before the trip I thought I would do rather well at understanding and speaking basic Spanish, because it’s the foreign language I know the most of. WRONG! I understood almost nothing. Technically I took five years of Spanish throughout middle school and high school, but they made us start over every year so I didn’t learn crap, literally. But I can really conjugate those -ar verbs!

Which is too bad because of the weird incident I had with the maid. Earlier in the day she’d tried locking me out on the balcony where I was reading. She’d come out to sweep and when she closed the doors I heard that *click* sound and became terrified I’d be trapped on a third floor balcony for God knows how long before my brother returned. I knocked on the glass and she opened the door. Then when I sat down again she closed and locked the door AGAIN. I got her to open it again, but I don’t think she ever figured out why I was so worried about the door. 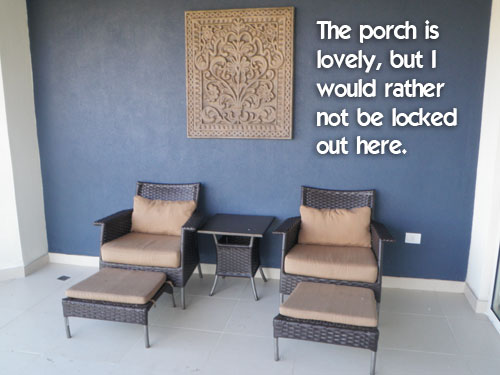 Then, later that day she came back to the room and started pointing at the bed and showing my brother and me some numbers written on a sheet of paper and I still to this day have NO IDEA what she wanted. I don’t think it had to do with the balcony. I also felt like a total jackass for not knowing enough Spanish to have a basic conversation with her. If I’d thought of it at the time I would have opened up my laptop and tried to use Google Translate to have a conversation. There was a meme going around Facebook awhile ago asking what two words of advice you’d give to your younger self. Mine would definitely be, “LEARN SPANISH.”

Seriously though, the next time I visit a foreign country remind me to learn some of the language first. I remember feeling like a jackass when I visited France too, but did not seem to learn from that experience.

Eventually all vacations must end, otherwise they would become our real lives and we’d eventually need to take vacations from them. Our shuttle got us to the airport over two hours early, which a paranoid traveler like me loved though everyone else seemed annoyed that they had so much time to kill. I was listening to music when I noticed there was a cat in a courtyard area of the open-air airport about 30 yards to the right of me. After oohing and awwing at the adorable little kitty I went back to listening to my music. A few minutes later I looked down beside me and saw this: 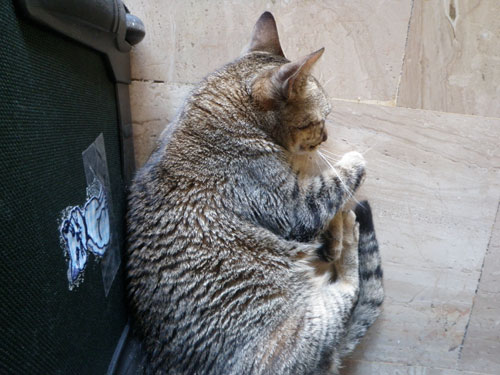 I would like to think Airport Cat chose to take a nap beside me because he sensed that I was a friend to kitties. However, it’s more likely that the position of my luggage next to the bench provided enough cover that he felt safe enough to catch a few Z’s. Airport Cat attracted the attention of several different children who came by to pet him. Several people asked if he was my cat which sort of offended me. You think I would let my cat run around an airport without so much as a collar on?! What kind of kitty mama do you think I am?!?! If I’d been more enterprising I would have simply said yes and charged them a dollar to pet him.

Airport Cat moved on after about 30 minutes. I hope he’s doing well. God knows an American airport would never let a cat run around like that so easily. I hear they use cats to sneak drugs into prisons, so who knows what a terrorist could do with one. The Punta Cana airport didn’t care much about boarding zones either. Americans get really worked up about what zone they get to board the plane on, but for our flight they called everybody at once, zones be damned! The most awesome part was that they let passengers board through both the front and back doors, which really sped up the process. 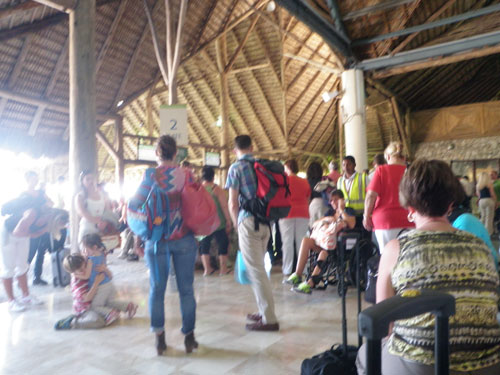 My flight back to the states was much quieter and more chill than my ride on the party plane to Punta Canta. I listened to music most of the way, but skipped any tracks that had anything remotely to do with death. “The Funeral” by Band of Horses? Skip! “‘Til the Casket Drops” by ZZ Ward? Not today! I realize that airplanes are one of the safest ways to travel, but every time I fly I briefly consider the fact that I could die in a horrible crash before reaching my destination. No need for my MP3 player to remind me!

I got through customs surprisingly fast and made my connection without any problem. I had to sit in the very back row which meant I didn’t have a window. That sucked, but I was also in the only row with an empty seat, which was awesome. Still, it was disorienting when we were preparing to land because I had absolutely no idea how high in the air we were. We could have been five thousand feet up or five feet above the runway. I had no clue.

Given the choice between a seat with extra space and a seat next to the window, I would have chosen the window. I do love the view.

Later: The Fuldamobil
Earlier: Punta Cana, Dominican Republic: Part 2 – Being there is the other half of the fun!
Home: Main blog index