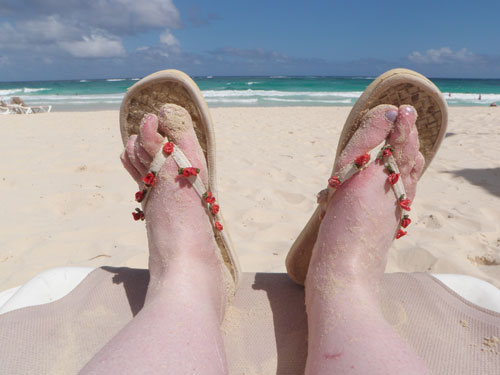 So it’s only now that I am letting you know I recently traveled to Punta Cana, Dominican Republic for a three-night stay at the Hard Rock Hotel & Casino. While I was there I didn’t post photos on Facebook or tweet about it or anything, which was sort of hard because when you’re in the Caribbean it’s very tempting to brag about the fact that you’re in the Caribbean. Vacation: A great way to make other people feel bad about their lives!

The first step in getting there was having a brother who was one of the top salesman in his company, thus winning a free trip along with several of his coworkers. I got to be his plus one, which was nice payback for that time I brought him along on my free ski trip to Breckinridge, Colorado in which I was supposed to report on the oatmeal festival for Quaker Oats who paid for the trip, but was sidelined by the super scary mountain pass of doom. (Total tangent: I still feel bad that I never made it to the oatmeal festival. I did the best I could at the time, but I wish I’d been able to do better.) Not having significant others to bring along on our free vacations has paid off for both of us. Unlucky in love, but lucky in resort credits!

I live in North Carolina and my brother lives in Indianapolis, but we were able to take the same connecting flight in Atlanta to Punta Cana. Little did we know we were boarding the Party Plane!!!! (Quadruple exclamation points totally necessary.) This flight was like no other flight I’ve been on. Damien, the head flight attendant was like a tour guide with a well-practiced comedy routine. There was also a bachelorette party on board and every time I turned my head it seemed that the flight attendant was swiping another credit card to charge someone for the alcoholic beverage they’d just ordered. People were standing up two rows ahead of me chatting with the people behind them. It was kinda crazy. Here’s a bit of Damien’s spiel that I recorded so you can get a sense of his game-show-host delivery style. It also allows you to experience how sad everyone was that the bar was closing:

His best bit was when he told us to check the pockets in front of us because one pair of free travel vouchers was hidden on board. After ten seconds he said, “No one found the prize? Well maybe you did find your own trash which you can throw out as the flight attendants walk down the aisle.” Well played, Damien. Well played. I don’t know if all flights to the Caribbean are like this one or we just stumbled upon the one where the flight attendant was on uppers. 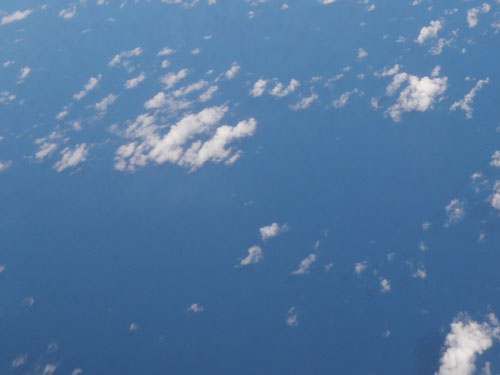 I specifically requested a window seat because I’d never been to the Caribbean before and wanted to enjoy the view. I loved looking outside and not being able to tell if I was looking up at clouds in front of a blue sky or down at clouds above the blue ocean. The captain came on intermittently to let us know when we were flying over points of interest like The Bahamas. I also happened to see a cruise ship sailing down below. It looked so itty bitty, but I know those ships are essentially floating cities. 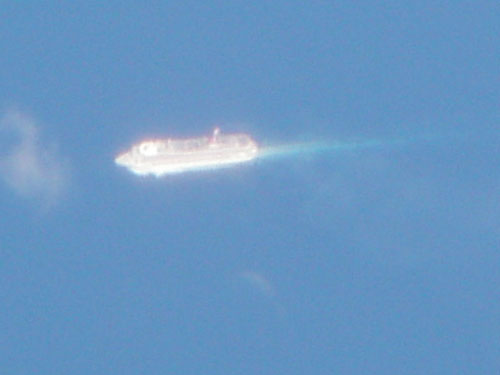 As we got closer to land I saw teeny tiny white specks in the water near shore which I think were much smaller boats. As we got closer and closer to the Punta Cana airport we started to fly over land and it was surprising how much of it is completely undeveloped, just like it probably was 100 years ago. When I’ve flown places in the US every inch of land is typically taken up by farms or buildings or something. 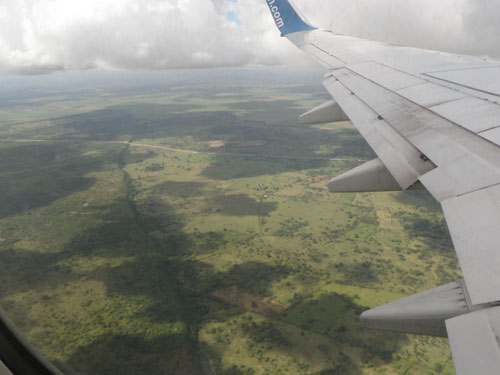 After we landed and were taxiing on the runway, I looked out the window to see these things: 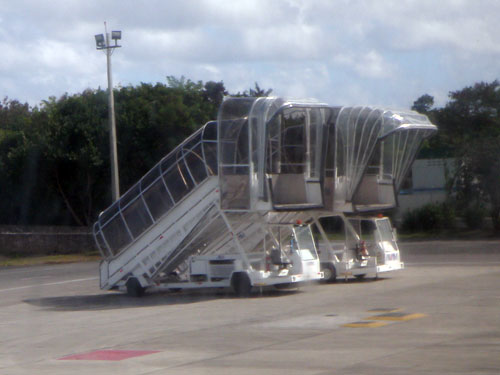 The Punta Cana airport doesn’t have jet bridges. Instead they roll the stairs up to the plane and then you take a bus to the main airport terminal. My biggest piece of advice is for those of you with long hair: keep a scrunchie handy! I wasn’t outside in the hot, humid air for more than two minutes before I wanted to dig around in my bag for a hair tie.

I was a little nervous about this trip because the last time I went to a foreign country was five years ago when I visited London and France. I kept imagining scenarios where I forgot my passport or my headache meds were mistaken for cocaine. Surprisingly, going through customs was easy. The line moved at a quick pace and they didn’t ask me any questions like they did when I’d entered London. The official just checked that our passport photos matched our faces and then stamped us in. We had to pay a $10 fee for a tourist visa, but they accepted US money so that was easy to do.

After customs, we got funneled out into the main baggage carousel area. My brother and I followed the crowd toward the exit. By this point we’d lost track of the other people from his company that had been on our flight. I hadn’t even been sitting next to them on the plane because I’d checked in at a different time at a different airport. We started to get nervous because we couldn’t figure out how to find the bus that would get us to the hotel, but one of several officials in the area came up and asked us what our group was. I had no idea, but Little Bro showed him the travel itinerary and the guide pointed us to the right place. Thank goodness for friendly staff!

Once we got on the bus we had a 30-minute ride to the Hard Rock Hotel and Casino. There are lots of resorts located on the eastern shore of the Dominican Republic that have been built in the last 20-30 years to draw tourists to the beautiful white beaches and blue waters. These lush, luxurious locales stand in dichotomy with the rest of the country which is much poorer. The resorts have guarded front gates and sometimes barbed wire around the edges to keep the locales out. So it’s only on your ride to the resorts that you get a feeling for the “real” Dominican Republic. I saw people on motorbikes or just plain bikes. There was a billboard for plastic surgery featuring a woman covering her breasts with her hands that was not something I’ve seen in the states. Yellow school buses seemed to be used for general transportation there, not for school kids.

The Hard Rock is one of the northern most resorts, so our bus stopped at two other resorts on the way to drop off other people. I actually liked this because it got us through the gates and let me see what the other resorts were like. It also reminded me of when I rode the bus in high school and was one of the last people dropped off. I knew where everyone else lived, but they had no idea where the bus went after they got off.

Once we arrived, a woman literally shoved a mimosa in my hand as I entered the lobby, which really set the tone for what the Hard Rock resort is like. There will be liquor. Lots and lots of liquor. There is also the illusion that it is free because the resort is all inclusive. When you check in they snap a wristband on you that you don’t take off until you leave. As long as you’re wearing it you eat for free at all the resort restaurants and can drink as many mimosas as you want. Of course it’s not really free because you pay to be at the resort, but I guess in my case it really was free because I’m a freeloader. 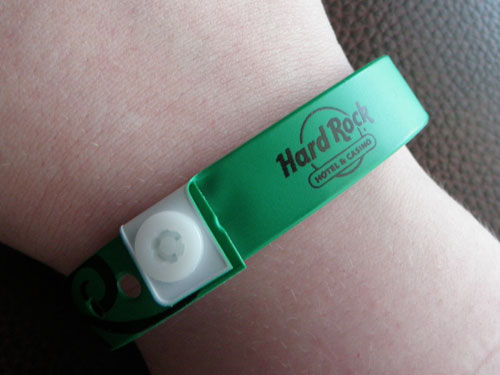 When we checked in the receptionist greeted us as “Mr. and Mrs. Fulda,” which caught my attention because I am NOT Mrs. Fulda. It prompted me to ask, “We have two beds, right?” I earned huge points with my brother at that moment because they were about to give us a room with a king bed, but my vigilance saved us from a nightmare incestuous sleeping scenario and we got a room with two double beds instead.

The Hard Rock is evidently one of the larger resorts on the island, so they have a couple electric cart trolleys you can hop on that are continually driving around the main path. We weren’t completely sure where our room was, so we got on one and waited for our building number to be called out. This is the path we ended up taking: 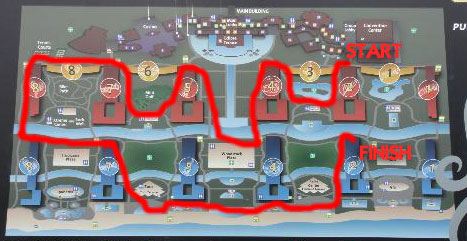 We ended up taking an accidental tour of the resort when we could have walked 100 yards to get to our building. I was ok with that because we got a sense for how big the resort was and we got to see lots of palm trees and pools and other stuff you find in paradise. We got to our room roughly 12 hours after I’d stepped out the front door of my apartment. We were both kind of wiped, but after a bit of rest we attended a mixer where I got to meet Little Bro’s coworkers.

And that was how my first day in Punta Cana went. I’ll let you know about the rest of the trip as soon as I actually write about it, hopefully sometime in the next week. These entries take a lot of time, almost as much time as it takes to get to Punta Cana!

Later: Punta Cana, Dominican Republic: Part 2 – Being there is the other half of the fun!
Earlier: JenFul Playlists – December 2013 and January 2014
Home: Main blog index