I was in line at the bookstore in December when a man tapped me on the shoulder, handed me a business card, and said, “Here. They pay money,” and then walked off before I could get a good enough look to identify him in a line-up. This is what the card said: 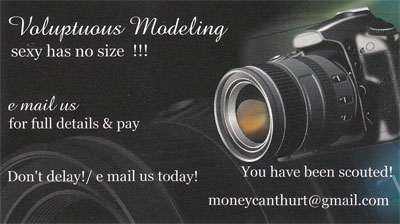 While I should probably be offended that someone wanted to exploit my body, I was mostly just flattered that someone thought my body was exploitable. I could totally do porn! I didn’t know that! It’s the strangest Christmas gift I’ve ever gotten. I’ve been various degrees of overweight my entire life, so there have been very few years when I’ve been a size that matches the default “pretty” setting of society. Fat women can be beautiful, but it’s a beauty that has to be defended. It’s a beauty you have to convince people about or that you even have to convince yourself about. Like every time you go outside looking good you’re saying, “Why yes, despite all the rumors to the contrary you can be large and attractive!” Pretty thin people never have to defend themselves this way. Everyone knows thin is the default pretty. These days I’m not as fat as I used to be, but not as thin as I used to be either, so my own approval rating of my body is somewhere around 65%. (A lot of that is due to my feet though, not my ass.) Despite that mediocre self-appraisal, someone else thinks I’m masturbatory material. And despite myself, I have to admit it boosted my spirits. I have absolutely no intention of following up on it, but it’s nice that I’m the one who gets to say no instead of being the one “no” is said to.

What I found most jarring about this experience is that it throws into question a motto I tend to live my life by, which is “You wouldn’t care what other people thought of you if you knew how infrequently they did.” I usually think about this when I’m sweating on the elliptical at the gym or if I’m dashing to the mailbox in my pajamas. “Don’t worry about it, Jennette. No one is watching. You are not the center of the world.” But in this case someone did notice me. They looked at my body and instead of thinking, “She’s fat. I’m going to ignore her,” they thought, “She’s fat. I must approach her!” That bookstore I shopped at must have been in Oppositeville. Or it might be that I am not as invisible as I think. Whether that’s good or bad depends on who’s doing the looking.

But sometimes it’s just nice to be seen.