I didn’t have any expectations for Pigeon Forge, Tennessee when I arrived there last September. One of the things I like about taking trips with my mom is that she plans everything and I just have to show up. So when I drove down the main drag headed for out hotel I was surprised to see, well, every damn thing I saw. 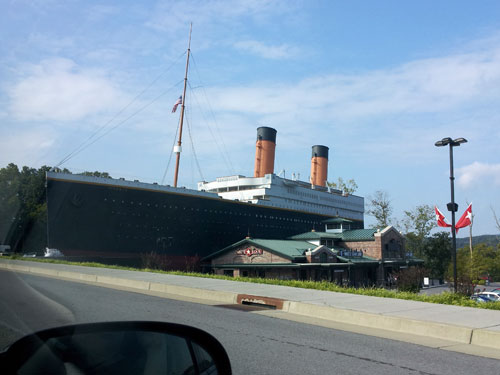 There was the Titanic. 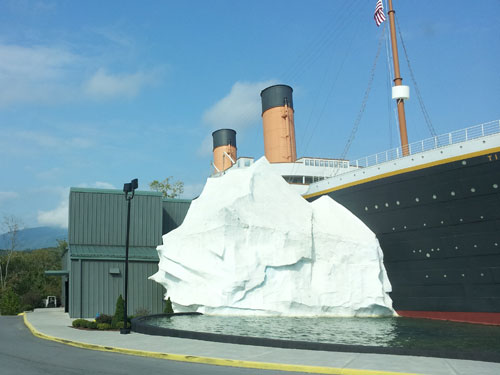 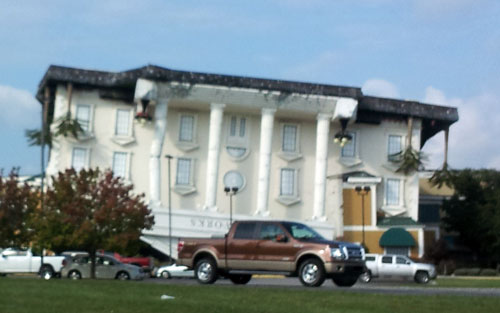 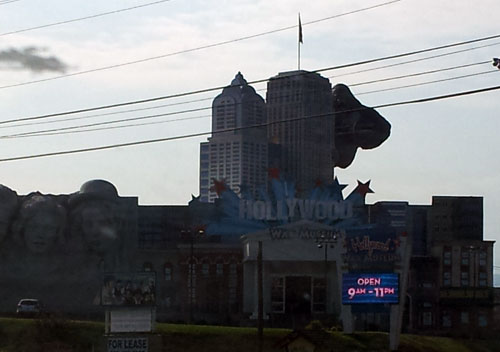 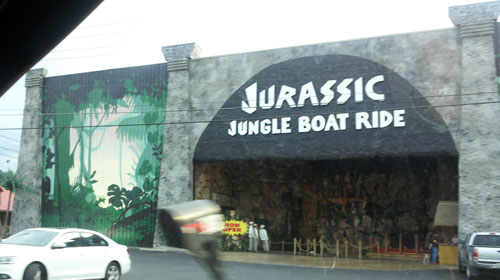 And let’s not forget the Jurassic Jungle Boat Ride… 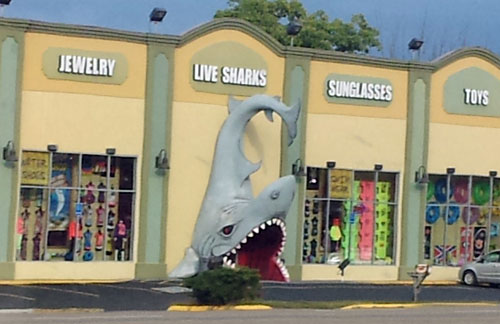 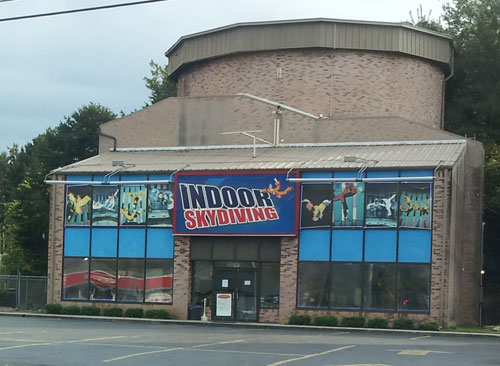 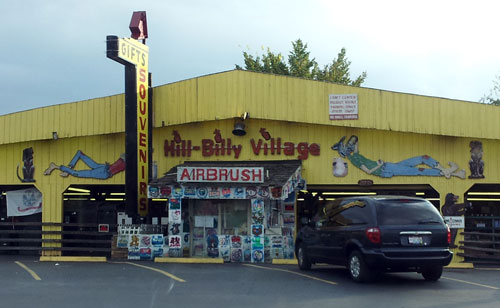 Strangely, I did not see any pigeons or forges, though there were way too many miniature golf courses and go-kart tracks to picture here individually. Basically, Pigeon Forge is a whole lot of WTF. Or as one of my Facebook friends said, Pigeon Forge is like Las Vegas vomited on Tennessee.

We’d ended up in Pigeon Forge because my mom and I had determined that Dollywood was halfway between Indianapolis (where she lives) and Chapel Hill (where I live) which made it drivable for both of us. The carnival atmosphere in Pigeon Forge was a surreal unexpected bonus to our travel adventures.

We stayed at the Clarion Inn, and I don’t normally rave about hotels, but this place was fantastic, especially for the price. The staff was friendly, there was free breakfast, the room was great, and I’m not surprised it’s the #1 rated hotel for Pigeon Forge on TripAdvisor. We even had a balcony with this view: 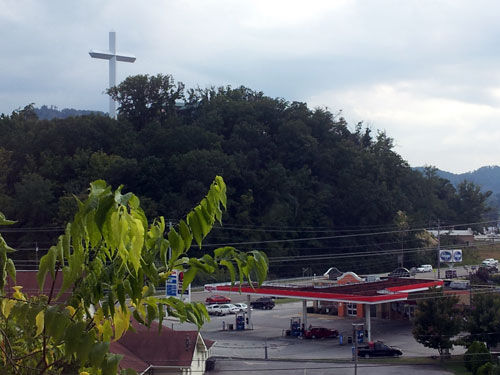 Yep, a big-ass cross sits on the hill behind the hotel, and in the other direction is the Harley-Davidson store, so they’ve got motorcycles and Jesus covered. 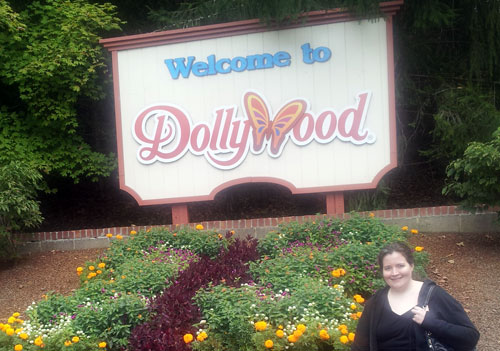 Going to Dollywood isn’t something that’s been on my bucket list, but since it was located in the right place geographically I was like, what the hell, let’s go to Dollywood! Whenever I’ve mentioned Dollywood to someone since this trip they always ask, “What’s it like?” which is not something I’ve heard people ask about Disney World or Six Flags. It seems like most people have heard of Dollywood, but they’re not sure what’s there. I’d say there are four types of attractions at the park: shows, shopping, rides, and food.

Shows
When you enter the park you can grab a pamphlet that details what shows are playing at what times. When we went there were at least nine different things you could see, ranging from live musical performances, a couple of movies, and even a birds of prey show. 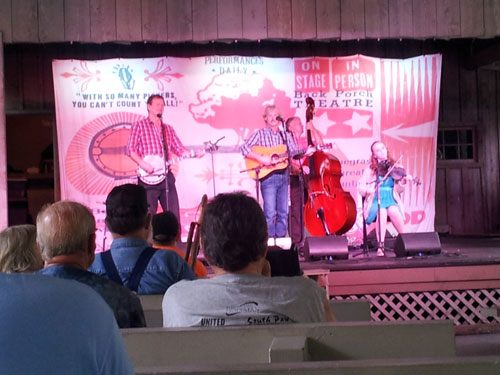 The string band was my favorite performance because the musicians had good chemistry and cracked jokes during the show. I’m sure they’re sick of telling the same jokes four times a day all season, but I guess that’s how you pay the bills. 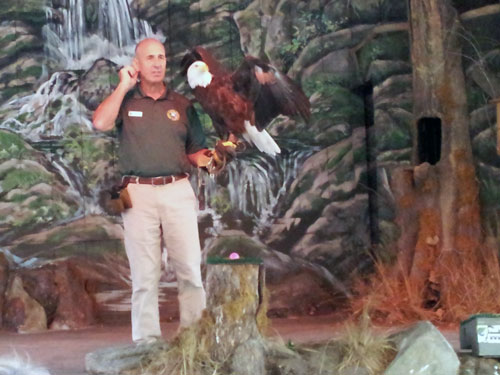 The birds or prey show was great too. We were able to look at the birds close-up before the show perched behind glass in their own booths. Then during the show they flew around above our heads and were generally magnificent as birds of prey tend to be. After the show you could go up to the stage and hand one of the birds a folded dollar bill which he would snatch from your hands and stuff in a donation box. It was terribly amusing no matter how many times he did it. I’m sure it’s also made their fundraising results skyrocket.

Shopping
I was not prepared for the amount of shopping you can do at Dollywood. There is a section of the park called Craftsman’s Valley where you can buy practically anything that can be handcrafted. There was a blacksmith, a glass blower, a wood carver, and more. Most of these shops had someone on display making new products, so you could watch them practice their craft. They even sold huge items like grandfather clocks that you could have delivered to the front gate to be loaded into your car. I don’t know who would go to Dollywood to buy a $2000 clock, but I guess someone must be doing it. Even outside of Craftsman’s Valley there were lots of stores selling clothing and various souvenirs. It could be pretty easy to spend a lot of money beyond your admission price at the park.

Rides
Dollywood has a couple roller coasters and other carnival type rides, but my mom is not the roller coaster type so we didn’t go on any of them. The only one we would have considered was the Dollywood Express train ride through the mountains, but it was closed the day we visited. It seems like Dollywood has enough rides to keep kids entertained for several hours, but if thrill rides are your thing you’re probably better off going to Six Flags or King’s Dominion.

Food
There is food everywhere at Dollywood. There are several sit-down restaurants to break for lunch, but there are also tons of stands where you can grab food and go. A lot of it is typical southern fare. Be aware of the kettle corn mafia though:

The ducks live in a pond nearby and you will have to fight them for every last kernel of kettle corn.

We spent all day at the park, arriving about an hour after they opened and leaving about 45 minutes before they closed. It was a fun, full, tiring day and I’m glad we went. I don’t feel like I necessarily need to go back, but if an opportunity arose I might.

The day after Dollywood my mom and I climbed a very steep path in the Smokey Mountains. Later that evening we attended the Dixie Stampede Dinner Attraction in Pigeon Forge which involved fire and horses and food and did I mention the fire? 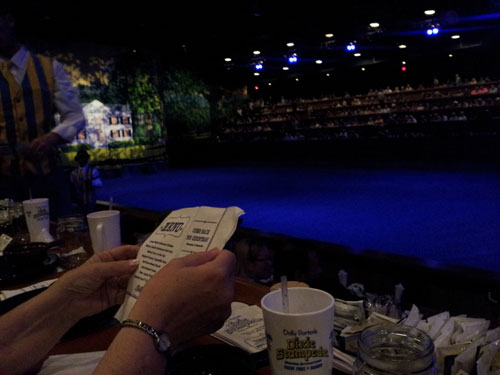 The Dixie Stampede takes place in a huge horseshoe shaped auditorium that must seat around 1000 people. It’s big y’all. You buy a ticket in advance with a seat assignment, and then every scoots down the bench to their proper spot where a plate and napkin are waiting. Then a waiter runs back forth in front of the table serving food before and during the show. The menu is on your napkin if you’re curious. 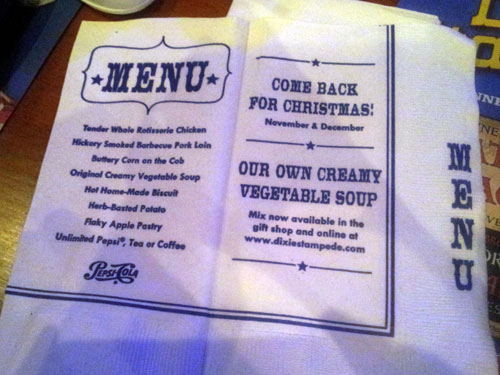 I must admit the show is rather spectacular just as the poster says. It starts out with a woman riding on the backs of two horses who jumps through several rings of fire. They’re really out to wow you. The show featured several other trick riders, a pig race, and ostrich race (which seemed straight out of Swiss Family Robinson), a lumber jack competition and various other crazy and entertaining feats. All of this while you get to stuff your face with both chicken and pork loin. The show also sets up a competition between the North and the South, represented by the two sides of the auditorium, so you get to root for your side during the races, though not without some hesitation if you’ve got the South and you remember that whole history-of-slavery thing. It ended with a tie when I was there, and I suspect it might always end in a tie so no one feels like a loser.

Even though the fire tricks were amazing, it did cause me slight anxiety because the auditorium didn’t have that many exits and there were lots and lots of people there. So if the place were to catch on fire, I’m pretty sure there would be a massive tragedy on hand, particularly because it was difficult to get out of your seat. 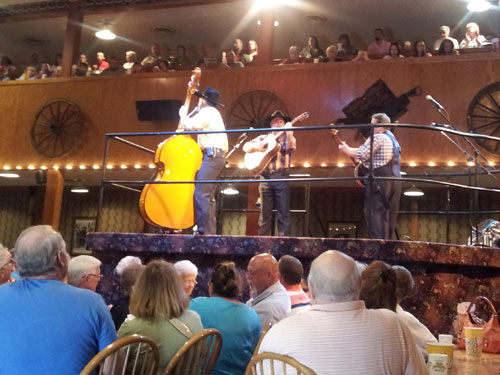 While the show itself was enjoyable, I didn’t like the fact that they tried to milk you for every dollar you had. When you’re admitted to the building they make you have your picture taken in front of a fake background and then try to sell you a picture of yourself before the meal. They also have a one-hour pre-show where everyone gets packed into tables in a large room, which wasn’t that comfortable. It’s also a way to make you pay $4 for a small drink served in a tiny souvenir boot cup when you get thirsty. Then on your way out of the show you have to exit through the gift shop. I definitely got the sense that the owners had bills to pay, and they were going to find any way they could to pay them. I’m sure insurance must be expensive for a show where people are jumping through rings of flaming fire.

All in all my trip to Pigeon Forge was a great experience. I don’t think I’d want to live in that hyperbole of a town, but it sure was fun to visit!