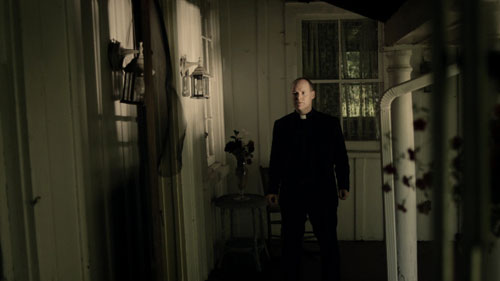 To be honest, I normally tune out during midnight mass. I only go to church once a year on Christmas Eve to be with my Mom. Although my body is there my mind is usually somewhere else. I’m also still annoyed that they changed some of the words in the call and response sections of the mass. Is nothing sacred?

So, there I was in la-la land, daydreaming away during the sermon, when I suddenly came careening back to earth because I swear to God I think I just heard the priest say he was an exorcist. (And when I swear to God in church I really mean it.) So I lean towards my mother and whisper, “Did Father Vince just say he’s an exorcist?” and she confirmed that yes, Father Vince is the official exorcist for Indianapolis. Who knew? Well, anyone who watches Paranormal Witness on the SyFy network knew, because Father Vince was recently featured in Season 3, Episode 19, The Exorcist. And he got 500 new Twitter followers after it aired. You can watch the full episode online right now if you’re interested.

What does any of this have to do with midnight mass? I cannot remember, but he worked it into the sermon somehow. Father Vince is actually a rather good speaker who walks around the church as he preaches, asking the congregation questions and drawing people into the sermon even if they’re trying to tune out like I do. Last year he handed out candy to a few people, including me, though I can’t remember how this related to the sermon either.

Went to midnight mass & a priest gave me chocolate. If he'd done that when I was a kid I would have been more religious pic.twitter.com/mIPJ5w6d

That’s the reason I can now say an exorcist gave me chocolate. I’ll go cross that off the bucket list.