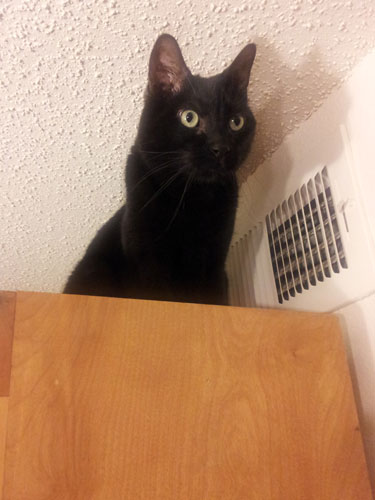 I’d just turned the lights off to go to bed last night when I heard some undistinguishable noises in the kitchen which were then punctuated by a very distinguishable CRASH!!! That’s right. I regret to inform you I’ve had to reset the counter in my sidebar widget to reflect the fact that it’s been 0 days since Java Bean broke a glass. The little bugger had made it to 292 days, which isn’t even half his record of 614 days that ended in February of this year.

It’s rather ballsy to be this naughty so close to Christmas, especially considering that he doesn’t have balls anymore. If we had an elf on the shelf he’d probably knock that over too. I lay 100% of the blame for this incident on Java Bean. In the past I had been known to leave a glass on the coffee table at night which the Bean found so tempting to knock over that I figured it was akin to entrapment. I’ve been very diligent not to leave any glasses or mugs on the coffee table overnight, instead putting them in the dishwasher, or on the kitchen counter if I feel lazy. Last night Java Bean knocked off a glass on the kitchen counter, now nixing that as a safe place in the dishware protection program.

I think he did it to get my attention in a ploy to get me to feed him. At his annual vet checkup this year we noted that he’d gained a pound, so I’ve been much stricter about only feeding him at specific times of day. Java Bean doesn’t seem too happy about that. Which is why I was picking up broken shards of glass at 1:30 in the morning. Someone will not be receiving any Christmas catnip this year!

I’ll end this entry with the video for The Crystal Method song “Glass Breaker,” which always reminds me of a certain naughty black kitty.