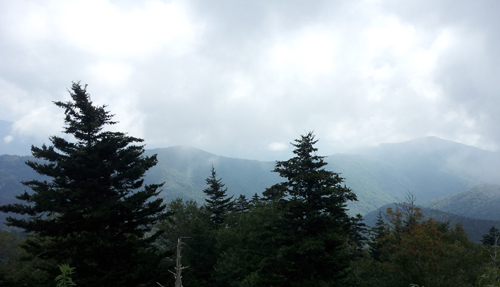 You can’t visit the national parks right now because the federal (non-)government is shutdown, but you can read this blog entry about my recent visit to the Smoky Mountains National Park. There is no “e” in “Smoky,” by the way. I checked. If you really want to use an “e” you can call the mountains “The Smokies.”

I ended up in the Smokies because my mom and I wanted to get together but didn’t want to fly anywhere. So we looked at the map and it turns out that halfway between Indianapolis and Chapel Hill sits…Dollywood! But there also appeared to be some mountains in the area, so we thought we’d check those out after we’d spent the previous day running around Dolly Parton’s theme park. (I’ll post about that eventually, I promise.)

We started out by stopping at the Sugarlands visitor’s center where we picked up some helpful brochures and watched a 20-minute movie about the Smoky Mountains. Nowhere did it explain why the area was called the Sugarlands, which I was particularly curious about. I don’t think anyone is growing sugar in the area, or even sugar beets. Google was unhelpful, so the mystery remains.

Our next destination was Clingmans Dome (no apostrophe, I checked), which is the highest point in the Smoky Mountains and the third highest point east of the Mississippi River. The drive from the visitor’s center took about 20-30 minutes as we wound up the mountain on narrow paved roads past lots of trees and an occasional creek. There was one corkscrew turn that was rather thrilling but made me glad I wasn’t the one driving. Sometimes there would be a break in the forest and you could see a beautiful view of the mountains between the trees. I had my GPS with me, so I turned on the elevation setting and shouted out numbers as we drove. “Three thousand feet! Four thousand feet!” etc. etc. until we got to the parking lot which according to the GPS was about 6300 feet above sea level. 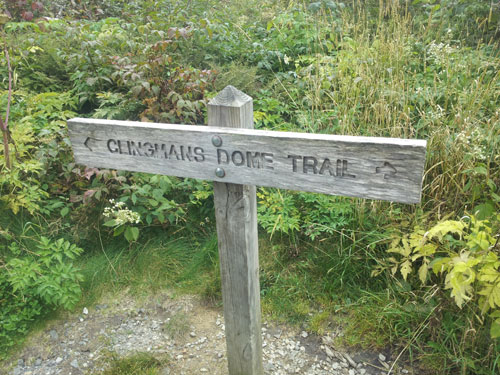 The dome itself is at 6643 feet and it’s a half mile walk from the parking lot, up a trail the guidebook said was “steep.” Um, yeah. That’s one way to put it. Another way would be to urge people with heart problems, asthma or other medical conditions not to attempt it like they do for roller coaster rides because this motherbleeper was STEEEEEEEEEP. 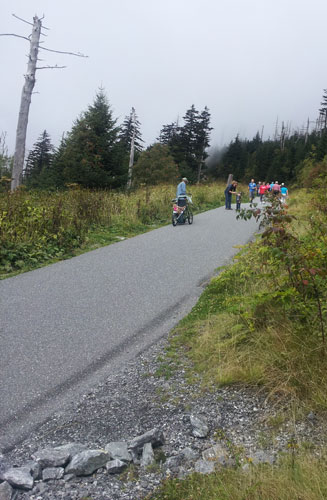 The photo doesn’t do it justice. I’m not sure why it’s so hard to photograph steep things. Essentially this trail was like going up a half-mile long staircase. There were benches along the way, but when I sat on them I felt like I was going to slide off, particularly because I was wearing rayon-polyester blend pants that didn’t build up much friction between me and the bench. That’s how steep it was.

The trail bends in several places, so you can never tell how much farther you have to go. After we’d gone a ways we started asking people on the way down how much farther it was to the dome. “You’re halfway there,” they’d say. Then we’d struggle up to the next bench and ask some more people. “You’re halfway there,” they’d say. And it continued on like this, as if we were trapped in some nightmare version of Zeno’s paradox, in which we were always halfway to our destination, doomed to walk upwards forever. We finally figured out that the numbers on the sides of the benches indicated how many tenths of a mile you’d traveled, but we were only at number 3. Eventually we could see the parking lot from the trail and I couldn’t believe we weren’t already at the top. 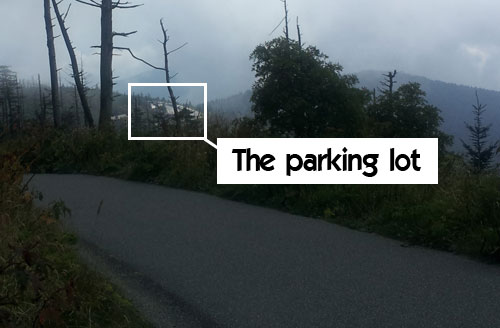 If I’d known the trail would be that steep and that long, I’m not sure my sixty-something mother and I would have attempted it. I love my mom and want to keep her around as long as possible. If you were to have a medical emergency on this trail I think you’d be pretty bleeped. The ambulance response time can’t be that impressive. So I asked her if she wanted to stop and turn around, but she persevered! We probably spent 75% of our time resting from the 25% of the time we spent climbing. We saw people who’d passed us on the way up pass us again on their way down. But finally we made it! Go, Mom! 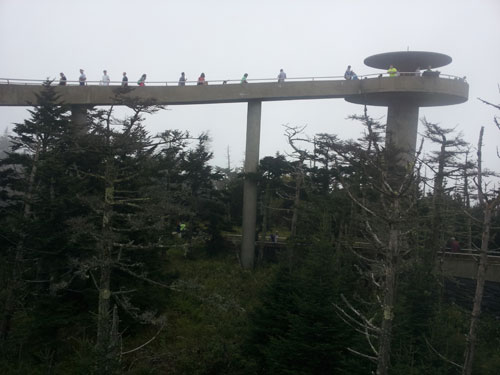 So what did we see when we got to the top of the mountain? What gorgeous view were we rewarded with? Um, this: 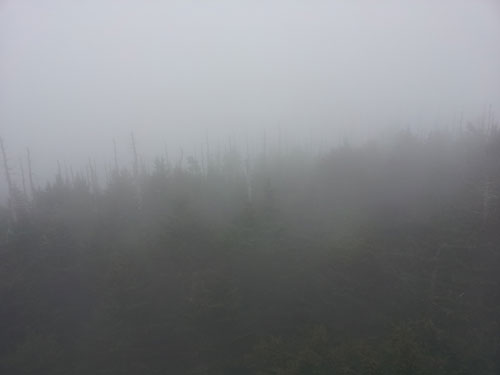 Yeah, that’s why they call them the Smoky Mountains. We’d asked a park ranger at the Sugarlands visitor center what the visibility was at the dome and he’d responded, “At this moment it’s clear.” He did not make us any guarantees about how it would be an hour or two later when we finally reached the top. That said, I’m incredibly proud we made it to the top, even if we were stuck inside a cloud when we got there. If anything, it made the place seem sort of spooky and surreal, particularly because the Smokies are littered with the skeletons of dead Fraser fir trees that have been killed by foreign insects. 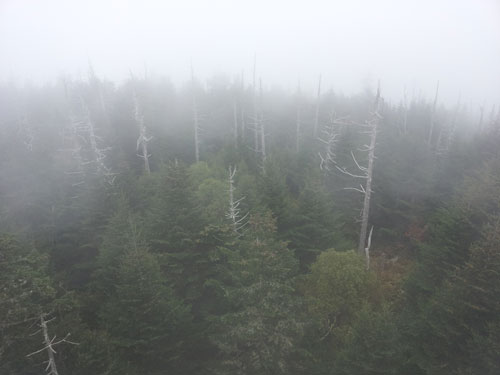 We then made our way back down the trail, which was easier than going up it, but still an exercise that used different muscles and required more of an effort to maintain balance. By chance, the trail to Clingmans Dome overlaps with the Appalachian Trail for a very short spurt, making it the highest point on the Appalachian Trail. It also makes it possible for me to say I’ve walked the Appalachian Trail, though I can never say that without thinking that it is a euphemism for stealing away to Argentina to visit my mistress. Thanks, Mark Sanford! 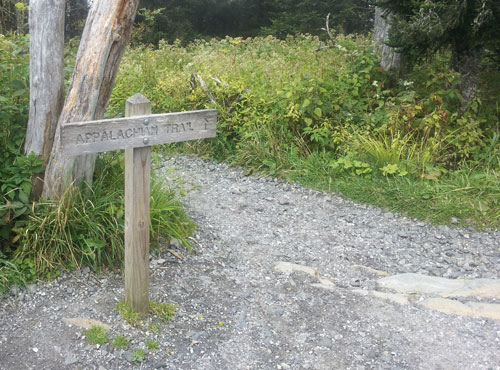 We got back to the parking lot and were grateful no bears had attacked our car like they did in this YouTube video which is the fourth Google result for a search of “Clingmans Dome.” Do you think that affects visitor turnout? Thanks to the video we’d watched at the visitor’s center I knew there were only two bears per square mile in the Smokies, so I wasn’t too worried about that.

On the drive back to the hotel I kept thinking about that song, “Climb Every Mountain” from The Sound of Music and wondering if that nun knew what she was talking about when she sung it. Because, DAMN, climbing a mountain is really effing difficult. That nun was hardcore.

And that was our Smoky Mountain adventure! I’m glad I went, but until they build Clingmans Escalator I’m not sure if I’ll be back again.