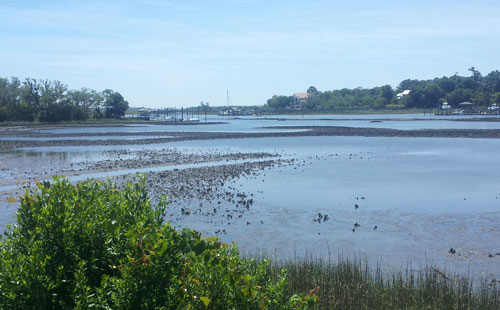 I’d like to say that day-tripping to Wilmington, North Carolina with my mom was my own idea, but I was just copying what my friend Shauna did when she visited last year. (But she did it without my mom, of course.) It’s a bit sad when someone from Scotland knows more about the vacation spots in your state than you do, but, eh. It saved me a lot of research time! (Confidential to Shauna: What have you heard about the Smokey Mountains?)

Wilmington is a coastal town that’s a little less than three hours away from where I live in Chapel Hill. It’s a fairly straight shot down I-40 too, so it’s hard to get lost. After spending an hour at the mechanic’s getting my car battery replaced (see previous entry) and beating Candy Crush Saga level 79 in the lobby (Yes! Finally!), we took off. It was Memorial Day weekend, traffic was heavy, and there was a burned out shell of a car on the other side of the highway. Then we drove past a 1.6 mile queue of cars, many with their doors open and their owners milling around, forming a new civilization because they would now be living there indefinitely.

We stayed at the Country Inn & Suites which I would recommend. Lovely staff. Free cookies. What else do you need? The hotel was about equidistant from the historic downtown and Wrightsville Beach, which were the two main places we wanted to visit.

We drove downtown and I did a phenomenal job of parallel parking my car. (Whenever this happens I feel the need to brag about it.) Then we took the trolley tour around the historic district which is one of the largest in any American city. We saw lots of houses like this: 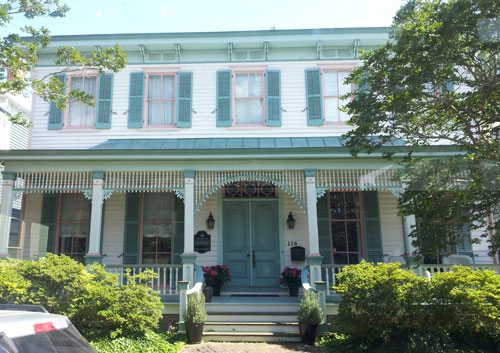 There was another house I didn’t photograph that included a door to the outside in every single room on the ground floor. That would drive me crazy because I’m paranoid about checking the locks. One deadbolt and chain is enough for me to worry about, thank you very much.

As we were driving around, sometimes you’d see a paved road with random patches of cobblestones. The tour guide told us this happened because residents of the historic district didn’t approve of the city paving over the cobblestones, so during construction they’d go out in the middle of the night with pick axes and dig up the road work.

I also learned that Wilmington is the home town of NBA star Michael Jordan and journalist David Brinkley. I did not learn that it was also the birthplace of Edward Snowden, NSA leaker, because he hadn’t done any leaking yet, but it’s his home town too!

After that my mom and I decided to grab dinner at a barbeque place called Sticky Fingers that she’d looked up in her AAA tour book. When we got there all we saw was a building that looked like it’d been in a fire. Then when we were watching TV the next night we saw this: 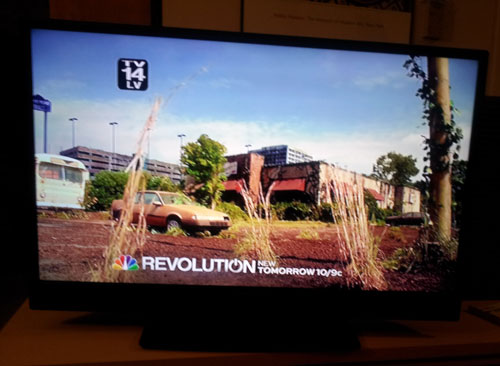 “That’s Sticky Fingers!” I exclaimed, fumbling for the pause button on the DVR remote during a promo ad. That’s right, we’d tried to have dinner at a rebel base featured in the post-apocalyptic TV show Revolution. Sticky Fingers had not burned down. It had closed a year ago and since then been used as a film set. This is particularly funny because that building is located at an extremely busy traffic intersection, definitely NOT in the abandoned city in the photo. I was surprised to learn that they film a lot in this town because Wilmington’s tv/movie industry is one of the largest in the country. It’s where they filmed shows like Dawson’s Creek and currently Under the Dome as well as Revolution.

Instead of Sticky Fingers, we went to Indochine, a restaurant my mother had spotted on the road on our way to the rebel base, which turns out to be the top-rated Wilmington restaurant on Yelp. Score one for Mom!

Their outside patio was beautifully decorated, and they even had live music that night. We arrived just before a huge dinner crowd too, so all in all everything worked out great. 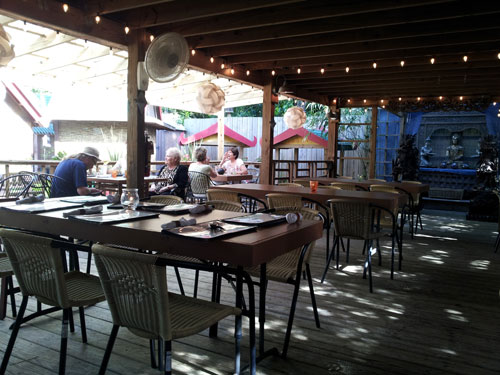 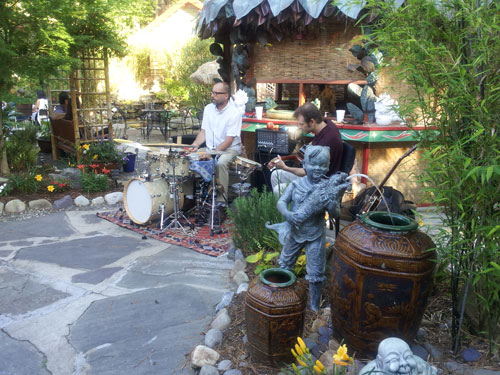 We headed back to the hotel and veged out for the rest of the night. Like so many hotels, the TV in our room was a hi-def, flat-screen but it was using analog cable service, so everything looked low-res and incorrectly proportioned. When I was flipping through I had no idea what channel I was on or what show was being broadcast, which was incredibly annoying. Then I realized my life used to be like this ALL THE TIME. Anyone else remember the Preview Channel?

I went to bed that night worrying that the car might not start in the morning despite the new battery (I told you I worry), but thankfully it did. We enjoyed the free continental breakfast, checked out, and headed to Airlie Gardens. It used to be a private estate, but is now open to the public (after your pay the $8 fee). It’s also home to the 460-something-year-old Airlie Oak tree. Please do not climb even though it would be totally awesome to climb. 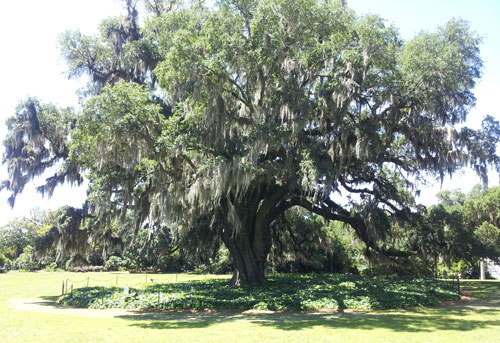 The gardens were really lovely. There was a marked trail we could follow that took us past various art, a sculpture garden built from old bottles, a butterfly garden with real live butterflies, a swan pond with real live swans, and a wedding setting up with real live wedding guests. 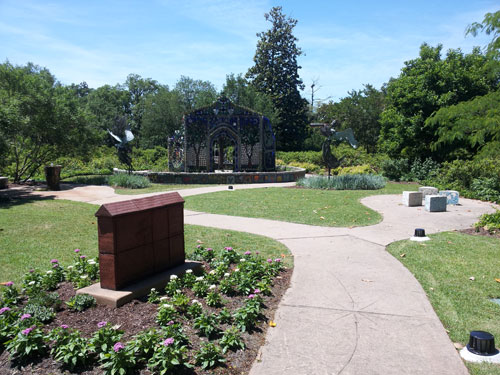 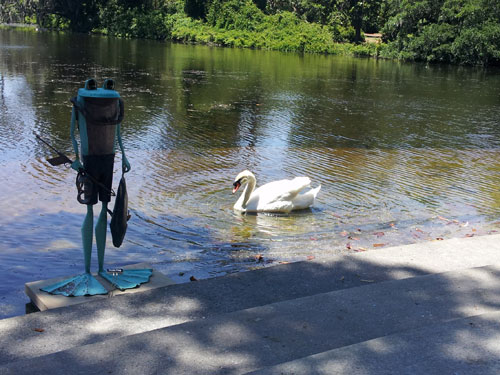 The place was large enough that it took an hour or so to get through, but wasn’t so large that I felt like I’d missed anything. It edges up against the sea, so you could smell some salty air at spots too.

After that we headed towards Wrightsville Beach to get lunch, when we were stopped by a-DUN, DUN, DUN-drawbridge. The bridge had just started to go up and my mother, being more experienced than me, knew it would take some time before it came down again. So we pulled a u-turn and had lunch at Sonic instead.

Sonic is my favorite place that can’t stay in business. They are a drive-up restaurant which means you park, order from your car, and an attendant brings your food out to you. They have delicious desserts like cream slushes. The only problem is they couldn’t seem to remain open in Indianapolis, which is where I used to live. A Sonic opened on SR-135 and then closed within a year or two. Then another one opened on Southport Road and it closed too. It was very frustrating! So when I am in a town with a Sonic I like to stop in. I don’t think they’re a regular part of a healthy eating plan, but they’re a fun treat from time to time.

After that we headed back to Wrightsville Beach, which I believe is technically a different town than Wilmington. It took awhile because we spent a lot of time sitting at red lights. We spent a lot of time in Wilmington just sitting at traffic lights, which was rather frustrating. I’m going to guess it isn’t always like this and we were just stuck in Memorial Day traffic.

Wrightsville Beach is very, very long and very, very narrow. It’s connected to the mainland by a narrow causeway, and it’s definitely not a place I’d like to be during a hurricane. We drove all the way up and down the long, long road that was parallel to the beach, but behind a dune and various houses so you couldn’t actually see the beach. There were parking spots all along the road, but every single one of them was full. The longer and longer we drove the dumber and dumber I felt in comparison to the people who’d parked on the mainland that we’d seen walking up the causeway on the way here.

We’d given up on finding a parking space and sadly were going to leave without seeing the beach when-EUREKA!- we spotted two girls getting in a car. They pulled out of their spot and we swooped in, like air filling a vacuum. We’d lucked into getting a spot right next to an entryway to the beach, so we strolled up and enjoyed the view for awhile. We also took this picture: 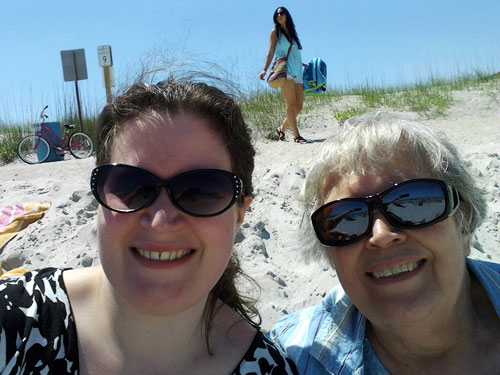 And while this is a good photo of my mom and me, I’m more fascinated by the woman who managed to step perfectly into the frame between our heads. Doesn’t she look like she just stepped out of a catalog and wants to sell me sandals and a tote bag? 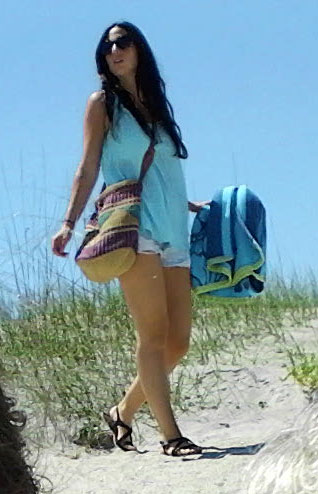 One interesting thing my mom observed is that no one at the beach had a tattoo. Once she pointed it out I realized it was true. Does anyone know what was up with that? Tattoos seem to be pretty common these days. Do people without tattoos tend to congregate togther? Are tattooed people extra wary of skin damage caused by UV rays?

When we walked back to our car a guy in a van pulled up on the grass between us and the beach asking if we were leaving. Once we did, he swooped into the spot and must have confounded the people in the car actually on the road who thought they were about to get the spot.

Then we drove home and I’m happy to report we had absolutely no car problems on the way there or back. It was a lovely day trip and I’m so glad I stole the idea from Shauna!